Waking up in Forest Row

I am in Forest Row, East Sussex. It's six in the morning and outside high in the trees a thrush is singing in the dark. I have just made coffee, switched on the computer and the lights. I don't think about it (the power that is). Like millions of people each morning I click the switch, press the button and expect light, heat, instant connection. I'm staying with Mike Grenville (thanks to a fossil fuelled train) and we're putting together an idea for a Transition newspaper. Yesterday we went to the local coffee shop where the talk was all about fracking as the village is close to the site at Balcombe where Cuadrilla plan to test for oil. We were going to go to have a sauna (wood-fired) by bicycle (human powered) but the project took up all our attention. 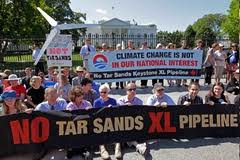 he fact is everything we do is shaped by energy - by electricity, by oil, by gas- and there is not one of these sources of power that doesn't somehow leave blood on our hands and present some kind of dilemma.

To look at where the coffee, the kettle and all those invisible wires go, what grids they are connected to, what industries, means we're looking at big picture: fracking, mountain top removal, coal-fired power stations, all the issues around nuclear power, the burning of rainforest wood and palm oil for biofuels, oil extraction in the wildernesses of the Artic, deep sea drilling. We're looking at dams and tar sands and pollution and climate change and land grabs. We're looking at companies that make billions of pounds profit, at ourselves struggling to pay bills as those prices keep rising and being totally dependent on that power to live our lives and all I want to do this morning is make my cup of coffee and write this blog before I catch the train home. All I want to do is make my breakfast and step outside into the garden and listen to that bird.

But I can't do that because I'm in Transition and this is the energy week and I know that even if we did make it to the woods to have that sauna last night the bender and the stove exist because of the same energy and somehow we're not going to escape that dilemma no matter how right-on and low-carbon I am about not using central heating. Even if the local people in Sussex, Lancashire and Kent and Wales resist the highly controversial, expensive and resource hungry drilling that will damage the water tables of Britain as it has in the United States, the question we need to ask is where do we get the power from?

"It's about narrative," said Mike. What is the energy story are we telling ourselves? 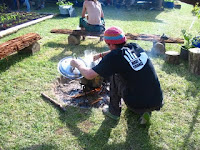 Off Grid This summer we sat the two of us, as the wind and rain shook the tents at the Sunrise Festival and drank our coffee (rocket-stove) as two men chopped wood for the pizza oven. Grateful for heat and shelter, it is experiences like these that bring home exactly the kind of attitude and engagement you need to live without modern power systems. Tin Village had a solar panel and a small wind turbine that kept the computer going for on-line communications and a small cinema. Everything else was run on wood. However this was the summer and a weekend. Most people, including myself, would soon be heading home. We love all that Kelly kettle camping business but we're on holiday. This is not our everyday world. 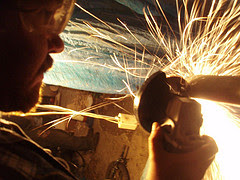 To live off-grid all year round in 2012 requires either money for alternative power systems (e.g wood chip boilers, ground-source heat pumps) or high principles. As anyone who has slept in a tent at Occupy Norwich can tell you, off grid is cold, damp (and frequently muddy) in a wintry Britain. Some fellow Transitioners have organised their houses to run almost entirely on wood burners for heat and water and cooking, some like the activist initiative Transition Heathrow have a strong supply of wood from a local tree surgeon for their rocket stove kitchen, a bike generator and four solar panels and a very committed crew.

Other Transition initatives have made that strategic step and started to create their own community energy source, most notably the solar power station in Lewes and the community wind turbine set up by PEDAL - Portobello Transition Town. To create the kind of enterprise requires huge commitment and funding and is no small undertaking. It's a big topic. as Forest Row discovered, when Mike set up a debate between Charles Hendry and Jeremy Leggett at the recent Transition Energy Fair.

But however you organise your house and your transport and your neighbourhood, all of them are underpinned by different stories. The first is that you can continue living the same individualist lifestyle, only using alternative sources of energy, and the other two involve an individual and collective powerdown. Which is not, as energy campaigner Mandy Miekle pointed out recently, so much about creating a low-carbon community, but a low energy society:

The more I have looked into the energy crisis, the more I feel that the next big leap forward will not be technological, but psychological. We must reexamine our relationship with nature, for all resources come from nature. We need to stop talking about outcomes like saving ecosystems without also asking why we are destroying ecosystems in the first place. As Paul Kingsnorth points out, this squabble between worldviews is not about numbers at all – it is about narratives. We have many cultural narratives to address, but our relationship with energy has to come first.

However there are a few barriers in the way, not least our ability to look reality in the eye.

Techno-fix. In Forest Row the talk is also about free energy and not the kind that comes from the sun or the winds and waves of the earth. The anti-documentary of the moment is Thrive where dodgy looking geezers fly over the ancient sacred sites and crop circles on a disc, discussing how the big oil corporations (controlled by the banks) are squashing all research into this everlasting power source, encapsulated in the symbol of the torus (see left). This key invention, transmitted by extra-terrestrial intelligence, will transform the planet and solve all the problems of the world (cue starving Africans) which according to the film are entirely due to the lack of energy.

This is another narrative entirely. It suggests that we will be saved by outside agencies who somehow will work in our best interests and all former ideas of collective equity are null and void. And instead of looking at the hard facts we just have to fall down a virtual rabbit hole into a wonderland mix of half-truths about the global banking system and conspiracy theory.

This is a bad fairy tale to be believing right now, because it suggests we don't need to do anything about our energy dilemma, that we don't live in a place of limit and or have to face the consequences of our actions. All real stories look at these realities, and the characters in them who are plucky and ask questions, who don't go along with the magic spells, are the ones who live to see a happy ending.

Time to check out those narratives.

DISCLAIMER: Just in case you thought Mike was responsible for showing me Thrive, I twisted his arm, curious to the max. What we were really watching in Forest Row was a film of Alan Watts speaking from a different paradigm altogether in California. . .get wiggly!