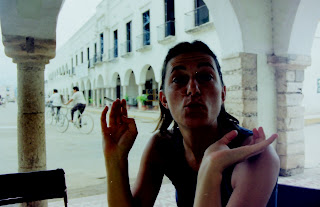 Happy New Year everyone! This post was originally published on the Transition Norwich community blog, This Low Carbon Life which ran stories every day for over three years. It was part of a three-day slot between posts about group communication Having the Conversation and reading Roger Deakin Notes from the Sunrise Coast.

Looking back I can hardly believe I wrote so much about Transition. I didn't realise then that blogging is as addictive as everything else. I'm pretty cured of the habit these days, working as an editor, writing news copy and the occasional column. Recently however I've been having some keyboard yearnings . . .  watch this space in 2014!

In The Transition Handbook Rob Hopkins describes our fossil-fuelled industrialised lifestyle as an addiction. We’re addicted to oil. And that presents humanity with a major dilemma: we find ourselves stuck inside a destructive self-replicating system with very few ideas of how to get out of it. We can either get together and find ways to liberate ourselves, or face the consequences of a planetary meltdown.

With classic dependencies like alcohol and heroin it’s clear what you do when you face the music, when you wake up to your life falling apart. You stop. You can do this with sheer determination, you can get professional advice. You can go to any number of self-help groups and sit in a room with fellow addicts. You can treat it as a personal problem or a social problem - the historical fate of certain people at the hands of Empire, indigenous tribes dispossessed of their land, the factory workers in the slums of 19th century Manchester. You can look at it as a spiritual problem, the fate of the most of us, escaping from reality in one way or another, because of the emotional harshness of our lives, because of the lack of connection with the earth and with the spirit of life. It’s not our fault and yet it is our problem. 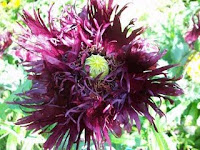 Most addicts, when they decide to quit can ask someone who has quit before them: How did you go through this process? And can expect to receive an answer. Normal is not-addicted (or at least not to the degree that it rules your life). But how do you do this with Energy? When normal is totally addicted and our lives are built around a constant need for electricity and gas? When oil interplays in almost all our activities? When no-one before us has given it up?

Instead of looking at the big picture of peak oil and climate change and feeling unable to act, the Transition Circles in Norwich decided to tackle the problem from ground up and go the way of self-help groups. We kept the big picture in mind and concentrated on the four drivers of energy, transport, food, stuff (and waste) in regard to our daily lives. 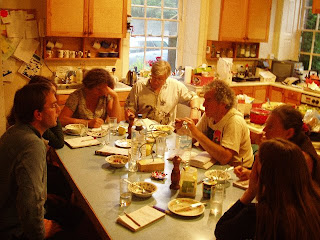 We confessed our profligate use of heating oil and gas, brought our log books, crunched numbers. We came out as bicycle riders, as users of rainwater, organic food producers, second hand clothes wearers, non-consumers, admitted a secret horror of plastic. But hey! We were in a Safe Space. It was OK to care about the planet. No one was going to accuse us of being tree huggers or climate agree-ers. We had a lot of fun (and good food). And in a few months, most of us had shifted to a low(er)-carbon way of living. We reduced our emissions to four tons (half the national average). We’re still working on it and communicating our findings to everyone we come across, 100 monkeys-style. This blog was created from those original meetings in 2009/10.

Still, as we found out, you have to go cold turkey and that’s a personal thing between you and the Power that rules your life. And then you have to hold those decisions in the outside world, often against stern opposition. How do you do that?

I’ve given up a lot of stuff in my life. I gave up sugar in tea for Lent as an experiment when I was 12 and, heathen child though I was, discovered the joy of renunciation. I never went back to it. After living a high life during my 20s and 30s I gave up a colourful list of recreational drugs, vodka and champagne drinking when I went on the road. I gave up newspapers and television and designer clothes and buying interesting stuff in markets. I gave up smoking cigarettes (oh, tobacco!), meat and fish and cheese, restaurants and elaborate cooking. In Transition I gave up daily hot baths, owning a car, supermarkets, flying, central heating. The pre-Transition decisions got me a lot of flak, the in-Transition ones curiosity and questions.

The trick is the decision. You’ve got to see it matters within the big picture. You have to see that it gives you freedom. And that you prefer that freedom, all that space and time, to being caught in a repeat cycle, even at the risk of "losing" people. It isn’t really renunciation as I found out, it’s breaking a hold something has over you. When I gave up drinking wine it didn’t mean I would never drink wine again. It meant that I broke the habit of having to have wine every day in order to feel OK. I still have hot baths, but only when I need one. It’s not driven from a puritanical urge. It’s come because I want to be fluid and autonomous. And on a social level I want to find out how we can extricate ourselves from the oil age and what that demands from individuals and communities, humanity as a whole. So there’s adventure in there, intellectual and physical curiousity, pioneer spirit, desire for experience (and copy!). What would it be like to live in rural England without a car? 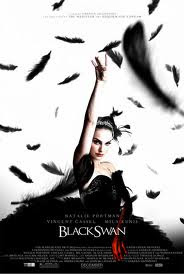 Right now I’m breaking a terrible habit I picked up this winter when I had the flu. DVDs from the library! I had given up going to the cinema in 2005. I love films, especially real life stories with redemption in them. The DVDs from the library are mostly Hollywood movies so I can’t even claim I’m engaging in high culture. I’m just distracting myself. After a while you feel enclosed in these worlds of American gloss, the girls with their perfect hair, those mawkish plot lines. The globalised culture depends on these movies and their star system to disengage people’s attention, to give everyone a taste for the artificial and the emotional tone it brings. Its violence and false desires. Its hidden heraldic structures that imprint themselves on our imaginations. Giving up has got to have meaning in there. And noble purpose.

If you lay out every thing you have given up, the habits you have broken, you’ll find yourself with a map of powerdown. That’s when you notice it looks a lot like gaolbreak. A lot like breaking a spell.