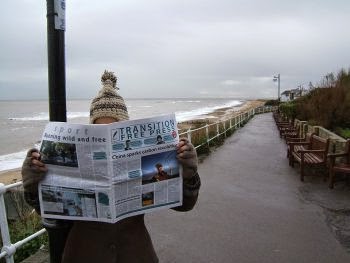 In 2012/3 I co-created and helped run a pilot for the grassroots newspaper, Transition Free Press. This was a full-on blue-pencil editing job on all macro and micro levels. However each issue I broke away from my desk to write about people I felt were key to the movement's outlook and philosophy.

I interviewed Shaun Chamberlin about TEQs, Mark Boyle about the gift culture, Anne-Marie Culhane about the art of Abundance and George Monbiot about his book, Feral, and how Transition initiatives could help rewild their neighbourhoods. In the current issue I spoke with 20-year old activist, Rosie Music about life in the pioneer community of Grow Heathrow, now at the end of their long legal battle and soon to celebrate their fourth birthday. 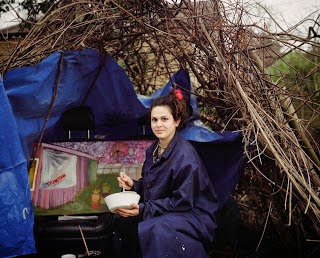 It was perhaps the coldest day of the winter. Lucy and I were trudging through the snow-covered streets of Sipson, a village on the edge of the world’s third busiest airport. I was about to ask the woman slipping and sliding towards us if we were on the right way, when she gestured behind her.

“How do you know where we’re going ?” I asked.
“The hats,” she replied and laughed.

We were en route to Grow Heathrow, researching for Playing for Time, a book about transitional arts practice, well prepped in Latvian and Andean headgear. Rosie was our guide. She has lived on this creatively-shaped, squatted site for over two years now. That day she showed us round its raised beds, well-stocked kitchen, compost toilets, rocket stove shower and her own tiny house under its tangled roof of elder branches by the M4. Grow Heathrow grew out of airport expansion protest and a Transition initiative on derelict land that was once a market garden and the proposed third runway. What strikes you when you visit is that people who live and flourish here show particular resilience and attitude that feels key for weathering the future. 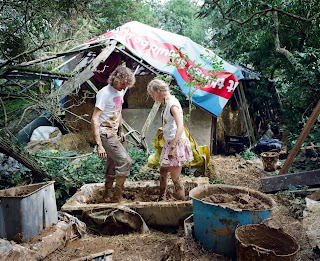 Activism and creativity lie the heart of Transition Initiatives. Most function as inspiration within traditional communities, but some of them also pioneer another way of being. Grow Heathrow don’t just do Transition as an add-on to their ‘normal’ lives every third Tuesday, or talk about living the low-carbon way at the local WI. They do it every day, 24/7. The renovated greenhouses that shelter 15 people permanently and hundreds of visitors, local residents, workshop and party attendees temporarily, are a hub for all kinds of off-grid and social practice. It’s a community that grows its own veg, builds its own wind turbine and straw bale meeting house, mends bikes, forages for medicine, chops wood, discusses its own governance and wellbeing, shares skills and opens its doors generously to anyone who wants to see what a certain future looks and feels like.

It’s not Shangri-La. It’s tough work and cold in the winter (though cosy in the main ‘house’ around a big wood burning stove). But there is something creative and energetic that conventional domestic life lacks, and you can feel it talking with Rosie.

“I first came when I was still at school. I felt it was exciting and imaginative. I was going to take some time out before university, but then I moved in and never left. I built a bender and started learning about growing and energy and living in a community, and I really loved it. And I still do.

“Being part of Transition Heathrow means I am involved in projects on the Grow Heathrow site and in the wider community. I’ve worked at the community cafe and the young people’s centre where kids have been excluded from school. I’ve started Open University (social science and policy). I also work with the Transition group I helped set up in Tufnell Park where I grew up. And I do some wider facilitation with a network called London Roots and give workshops on consensus and non-hierachical organising. 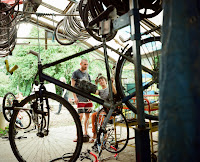 “In Sipson we take part in the Spring and Christmas Fair and the yearly Hayes Carnival. We also are part of the local campaign to keep Botwell Common from being developed. The village has been blighted by airport development and Grow Heathrow has given people hope that they are not alone in their fight and others will stand with them. The site is an example to local people of what 'else' there is, and what can be done with some creativity, determination and love, as well as a place to learn skills and come for a cup of tea.”

“The arts play a massively important role in helping people be more imaginative, free and communicative in their lives and in Transition.”

Rosie has helped run two arts residencies, where people from all over the UK have come to create an exhibition or performance. She is also involved with Transition Heathrow’s wellbeing group, which facilitates communications between everyone on the site.

“There’s a lot more diversity in the project now - people from different backgrounds and cultures - which means there is more disparity in how people see the world. This can create more conflict, as well as more reality. We try and do something together every week: go for a swim or to the park. Other times we hold councils, or a bigger gathering if there are tensions on site, or we have a court case coming up. We help with mediations between people and organise workshops. 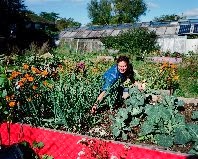 “It is important to have a very diverse mix. We miss having kids on site, and also elders. It is key to have people who are enthusiastic about collectivity, no matter who they are: people who will put energy into the project and work together.”

There were some questions I had a year later now the group has lost their court case against eviction: what, for instance, were the challenges living in the community?

“Living with more people. You definitely have to learn how to live more co-operatively and understand yourself as a part of a whole. It’s really deep living together and doing these things. Being able to sustain yourself in a place that is tense however can also be draining. Grow Heathrow is both a home and a public project and anyone can come through, and obviously you are by an airport, so there is no getting away.

“Technically we can be evicted at any time. We’re still trying to appeal to the Supreme Court and negotiate with the owners to buy the land. This would change the organic nature of Grow Heathrow, but it would also release a lot of potential; for example we’d be able to work with local kids, which we can’t do because of insurance.

Looking back what would you see as your key experiences? 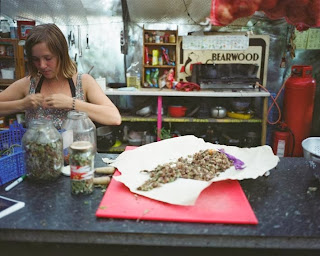 “Some of them are practical: building a my first cold frame; helping weld the blades for the wind turbine; making the wood burner in my house; walking barefoot around the site; learning how to make capers from dandelion buds; making cider from local apples; making dyes from leaves in autumn. Being in a community, knowing this is the energy and we created it, this is the food and we created it.

"Some are massive events like our third birthday; Christmas last year when the neighbours came round with a turkey; making a coffin for Keith when he died, and digging his grave and planting a cider apple tree for him with manure from our compost toilet. He really loved cider!”

Do you see yourselves as an example of living in the future? 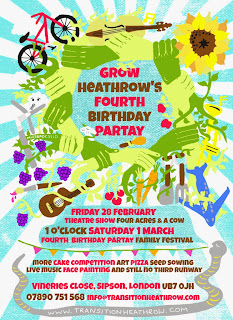 “Our official line is ‘Furthering the Heathrow vision - an iconic symbol of community resistance to economic, ecological and democratic process.’ We don’t always meet our aims fully of course! It can be a struggle against the tide. But I see Grow Heathrow as an example of how we can begin to create a resilient community, how we can increase resource autonomy and build new alternative structures of organisation.”

“Was there anything you miss In terms of comfort?” I asked finally, remembering last winter’s snow and mud. Rosie laughed:

“Two things we really need to build are a bicycle powered dishwasher and washing machine . . .”