Bringing to Share - Communications and the Low Carbon Cookbook 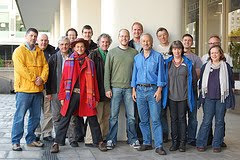 Welcome to our Transition Themes Week #9, our regular round up of Transition Norwich groups and projects. It's been a full-on month for Transition communications. As well as coordinating this blog and putting out our monthly bulletin the comms crew have also been working on a deadline for the Transition Network's Social Reporting Project where Mark, Kerry and I are writers and editors.

Last week I went up to the Festival Hall to take part in the Network's Project Sharing Engine and become one of the "alpha" testing team. Several webmasters from different initiatives are helping roadtest this innovative on-line sharing platform that will allow initiatives to disseminate their myriad projects across the globe. At the moment anyone can log their project by going directly onto the main site, where it is kept much like a library. The Sharing Engine will enable people to not only file copy via a widget on their own website but also to connect and cross-reference with others. It will become a vast interconnecting web and storehouse that will enable Transitioners to see the full range of activities and glean information and inspiration. So the meeting was as much about creating a dynamic social infrastructure as it was a technical exercise. 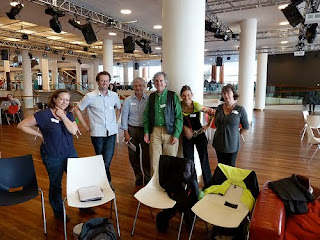 Not that computing skills were absent. At the start we had to say how tecchy we were in terms of numbers on the scale of one to ten. I have to say I did not feel very alpha at this point as several wizard 10s are on the team (including the Networks own technical co-op - Jim, Chris and Paul) as well as the project's mastermind, Ed Mitchell (8), the Network's new webmaster, Laura (9), and the Newsletter's editor, Mike (7). Where your zeta (2 1/2) reporter did have something to offer was editorially. Unlike the other initiatives most of TNs active members are also bloggers, either for our news blog or on This Low Carbon Life. Most of us regularly file copy, take pictures and create the necessary feedback loops for a resilient and connected collective.

One of the challenges in Transition is for people to actively report back on what is happening on a daily basis within the initiative. There are usually one or two people that are key communicators, but lacking other contributors the momentum for regular collective communication does not happen. One of the reasons we have the very non-tecchy Blogger system is so everyone can upload copy easily (the Network uses the far cooler Drupal). By running community blogs and contributing daily posts the rhythm of the enterprise carries people forward. This was one of the main topics we discussed in our break-out groups. When many people focus and participate within a shared enterprise everything becomes much easier and more fluid. These are how grassroots and diverse systems self-organise and create strong networks. 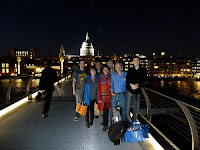 This has certainly been the case with the recent Occupy Movement which we'll be reporting on this week, along with other on-the-street reports: Simeon on the St Augustine's visioning (Economics and Livelihoods), Helen on the Magdalen Street Celebration, Elena on FarmShare's potato day, Ruth or Steve on Transition Hethersett and Kerry on Social Justice.

And in the spirit of the Sharing Engine here is a precis of the Low Carbon Cookbook project I wrote about last week as a social reporter in our Food and Health week. It is excerpted from the main piece what is going down in my kitchen is going down in the world which you can read here:

I am standing with a giant tea pot in my hands on a cold November day, listening to Tully Wakeman from East Anglia Food Link at Sustainable Bungay’s Growing Local! conference. He's telling a packed hall how 70% of grains grown in East Anglia are for animal feed, how “local” pigs are fed on rainforest  soya. He’s talking about peak oil and modern agriculture, how in the future we will have to learn to eat less meat and less dairy, a far simpler fare. This is it, I am thinking. This is The Project. 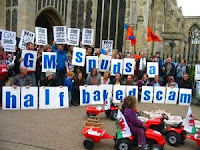 The Low Carbon Cookbook did not start straight-away. It began after a meeting between bakers, farmers, researchers and Transitioners to discuss how to create the Norwich loaf. It began after working with my friend in Transition, Josiah Meldrum, on three issues of Food Inspiring Change about local food projects and then on a treatment for a book called One Planet Community Kitchen (now roots shoots & seeds). It began after Tully inaugurated Transition Norwich’s second phase – the start up of the innovative Transition Circles, neighbourhood groups which looked at personal carbon reduction in all aspects of our lives - home energy, transport, food, “stuff” and waste.

It began after many of us had catalogued and recorded our downshift experiences in the TN blog, This Low Carbon Life, from baking bread to the Norwich livestock market, from eating roadkill to the health hazards of the global food business. It began in September 2010 after a fortnight on Transition Food Patterns that catalogued many of the local outlets, market traders and community gardens that make up a Transition food infrastructure, including the CSA that has now become Norwich FarmShare.

The Low Carbon Cookbook group have been meeting for over a year now, paying attention to dishes and produce in the way Mark was describing in respect to land and medicine plants on Monday. Most of us on the project have been part of the Transition Circles and trained as Carbon Conversation facilitators. We're cooks and growers, writers and academics, vegans and meat eaters, some of us constrained by chronic illness and allergies. All of us are highly aware of the ethical and political choices we are faced with everyday and vote with our forks, as Michael Pollan famously advised in the documentary, Vanishing of the Bees. 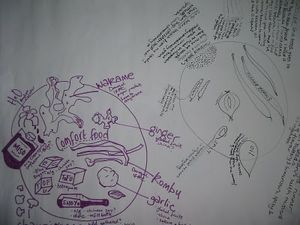 Josiah introduced our first Low Carbon Cookbook meeting at The Greenhouse with a talk on the history of co-operatives. We began the project by conducting a mapping exercise known as Deconstructing the Dish, speaking about its provenance, energy use and our memories around the different ingredients. My own was the humble dish of fava, first eaten on a Cycladic island in Greece, aged 19.

We have held kitchen conversations over a seasonal, local, organic, freegan, fair-traded, foraged meal each month since then. We have met in each other’s houses, in Jo's raw food neighbourhood café, The Nectar, at Norwich’s weekly FoodCycle, looked at key ingredients and tools, recorded and photographed all our sessions. We have considered all aspects of the industrial food system and how we can break out of it, how we can restructure, relocalise and most of all radically change our relationship with food.

The aim of the project is to compile (and publish) an A-Z on all subjects you need to know to eat as sustainably as possible within our present distribution systems. Here is a small taster:

It is built around a collection of Bring-to-Share recipes we have been cooking up for the last year and also a growing list of vegetables, wild and foraged plants. It contains resources: documentaries such as Food Inc and The End of the Line, books like Felicity Lawrence's Eat Your Heart Out! and Masanobu Fukuoka's One Straw Revolution, as well as local food sources. In short it helps create the atmosphere, conviviality, intelligence and connection that is intregral to a low-carbon culture. It is our hope that by providing this kind of practical and philosophic blueprint, other Transition initiatives might compile their own regional cookbooks with local resources and dissmeninate them eventually via the new Project Sharing Engine on the Network.

Looking forward to linking up!