We Are The Many

Protest song sung by Makana in front of world leaders at APEC summit in Hawaii (45 mins wearing Occupy with Aloha T-shirt)
Since September 17 there has been a new mood in the Western world as the OccupyWallStreet protest ignited a fire that has been roaring in the cities ever since.Tonight before hearing Rob Hopkins talk about his just-published, The Transition Companion, I'll be heading down to OccupyNorwich for their evening assembly.

Occupy is the story on everyone's lips and fingertips. It's the subject of this week's social reporting blog as Shaun Chamberlin introduces our week discussing economy and Transition as well as the key topic of many brilliant reflections within the social media. Transitioners everywhere have been taking part in the tent universities that have sprung up on the pavements around the globe, hosting talks and films and finding practical ways to contribute to this burgeoning movement. 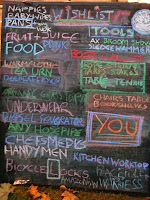 But to really understand what thousands of people have been doing with their bodies every night, risking being brutally attacked by police, you have to experience what it is like to sleep on the cold hard ground in the middle of a city centre. That's the business of social reporters, of those who are Becoming the Media and creating a new communications infrastructure, you have to write from within the field as one of the many, rather than observing from the comfort and safety of a house or office. You have to put yourself on the line.

Just before Guy Fawkes night I went with fellow Transitioner Nick from Sustainable Bungay and stayed amongst the tents. Here's a report that was first published on the OneWorldColumn.

On a Friday night in Norwich, November 2011 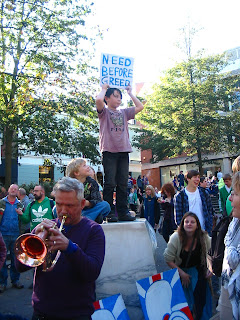 It's nine o'clock and eleven of us are discussing climate change. So far we have agreed that in order to mitigate the effects of modern civilisation on the planet's atmosphere we have to powerdown to a low-carbon economy, de-industrialise our agricultural system and bring equality to bear in all aspects of the human world. You might think this is taking place in a warm lecture hall or meeting room on this November evening, but we are far from such venues. We're meditating on the vicissitudes of financial power under the statue of Sir Thomas Browne at the Haymarket. We're sitting on a quincunx of (very hard and cold) granite shapes, inscribed with the names of his philsophical examinations upon life and death. Occupy Norwich is holding one of its evening talks and I've come to spend the night here amongst the tents. Like thousands of others I've been following the activities in Zuccotti Park and Finsbury Square on-line and I want to find out what it's like to occupy a space in physical reality.

Earlier in the week I took part in the general assembly at the Occupy London site at St Paul's where a sea change had just occured. The Church, having originally joined forces with the City of London Corporation to evict the protesters, decided not to go ahead. Clerics resigned from high places as the dilemma presented by the presence of 200 tents in the financial district forced the church to have a change of heart and threw light on the customary obscure power play of the Corporation.

As you weave between the tents you are first amazed by the camp's organisation- the field kitchens, information booths, rota of night watchmen, co-ordinators and working parties - and then by the intensity of the dialogues. In sharp contrast to the shoppers and office workers wrapped up in themselves on their journeys home everyone is talking and listening - a media team sitting in a circle outside the coffee shop, workshops on inner change and the NHS in the meeting tent, a soapbox exchange on industrialisation and slavery by the church railings. It feels modern and yet historic, significant in all ways. St Paul was famously a tent maker, this site was once a place for radical and popular debate known as the folk moot. It's as if all the spiritual and political contradictions about Western culture have been thrown up into the air, in these squares, on the these steps, for a radical re-examination. Not by the 1% who rule but by the 99% - the people who serve its complex machinery. Ourselves.

Philosophers, since the first Athenian city-state was created, have provided politicians with rational justification for all their red in tooth and claw deeds. Political ideas, sanctioned at universities, have justified all the empire's violent acts from the shock doctrine meted out in South America to the rationale behind the atrocities of the Khymer Rouge. In spite of the call from the "thinking classes" for a full-scale manifesto of economic demands, the Occupy movement is taking time to self-organise and find its own directives. Directives that are not just dictated by "left hemisphere" reason and force. 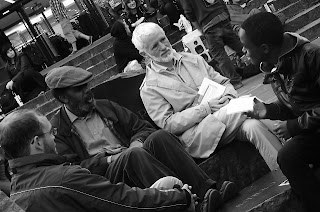 New kinds of street university are springing up around the world. These exist so people can get together and decide on the intellectual and ethical base behind their actions. Most of us have not met before and certainly not in these configurations. We are strangers bound together by a common cause, by our sudden realisation about the global banking system. We are used to living and thinking individualistically, within a hierarchical structure, sanctioned by the official bastions of education. Now we are coming together and learning to think and come to conclusions as a group, creating a new narrative. In common with other occupations, we use the tools of consensus decision making, skill-share, assembly and co-operative agreement.

It's a Friday night in Norwich. At the FoodCycle Cafe at the Friends Meeting House the long queue for the free weekly meal has now dwindled. At the Forum a Cafe Conversation on Philosophy and Depression organised by the UEA is winding up. We're just getting going. It's a debate that will go on until eleven and then continue around the camp kitchen until 1.30am.

* * * *
In 1992 a German professor from the University of East Anglia walked from Norwich down the coast of Suffolk. His meditation on life and death begins with Sir Thomas Browne and ends in the streets of London, following a train of black funeral silk woven in this city of silk-weavers. The Rings of Saturn charts the intricate wheel of history as it holds us ransom in its grip. In their seats of power, the 1% preside, like dragons with their hoards, coveting form, bringing death and ruin on the world. As I lie on the cold hard ground, next to Sam and Victor and Nick, I'm wondering what it would take to break that pattern, bring warmth and life back to the people, to get us off the wheel. 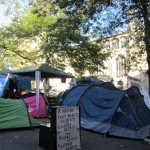 There is the most terrific din outside as the street sweepers and dustbin collectors storm down Gentlemen's Walk. Someone is speaking loudly to an itinerant man with a flying helmet. It's six o'clock. I climb out of the sleeping quarters I've been sharing with the others curled up in sleeping bags in one of the communal tents. I greet the dawn watchman of the camp and walk out towards the loud speakers sitting under the plane trees.

One of the most challenging things about the camps is confronting the hard edge of our city culture, for this is no summer festival in a green and pleasant English field. In common with other protest camps Occupy Norwich has a no alcohol, no drugs policy, but that doesn't apply to everyone else out on a Friday night. As well as keeping yourself together physically, you have at all times be ready to converse with everyone that swings by and cope with both the positive and negative responses to the occupation - not just the ordinary shoppers and workers, but the police, the Street Pastors, the homeless, the bitter and confused and angry, the mentally challenged, curious and cynical teenagers, merry pranksters celebrating the end of another hard week.

What is striking is the camp's general friendliness and openenss towards the people who turn up. The way strangers respond to one another generously, bringing not only free food, but their knowledge and time in order to articulate the complex web we are all caught in. We are the 99% means difficulties have to be dealt with rather than pushed away or dismissed in the heartless manner of all Empires.

The itinerant man starts to reel down the steps, singing a military song in German. "People are sleeping!" I tell him, but he is oblivious. Heil Hitler! he shouts as we stand under an umbrella in the softly falling rain.

"I don't think we want any of that around here," I say and laugh, and direct him back to the street where he disappears into the day. That's when I remember it's the 5 November, why everyone has been wearing those Guy Fawkes V masks and transfering their money out of the Big Six banks. It's a quiet revolution that's taking place in the cities, that burns within the right governance of all our hearts.

If we can hold out against the repeating hostilities of history, we might just make it to a future. 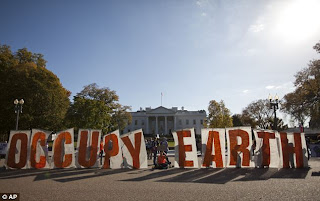 Makana singing We are the Many; wish list at Finsbury Square via Flickr; Young protester at OccupyNorwich, 15 October; writing on the steps at St Paul's, OccupyLSX; ON group in discussion on those seats (blipphoto.com); the camp (South Norwich News); OccupyEarth at the (successful) Keystone Pipeline protest outside the White House.
Posted by Charlotte Du Cann at 17:50