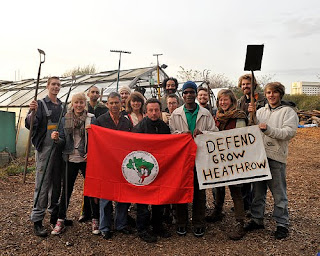 Today I'm writing a post in solidarity with my fellow Transitioners at GrowHeathrow, who are going to court tomorrow to defend their home. For people who don't know about this key Transition initiative, do visit their website and look at everything they have been engaged in in the last two years. I visited everyone there last month (Joe Rake in their communications crew is one of our Social Reporters) and it is really a dynamic and friendly place. The group have cleared 30 tonnes of rubble and made a lush and vibrant garden. It is totally off-grid and the first Tarsands-free community in the UK. They have installed a wind turbine and solar panels and cook with wood donated by a local tree surgeon. It's a true community space where they hold frequent workshops and decide everything by consensus. If you wanted a vision of how the future could be, the kind of future Transitioners frequently talk about or imagine might be possible, you need to look no further. Everyone is welcome. 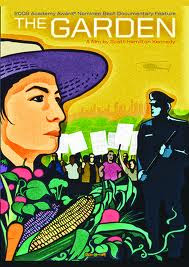 GrowHeathrow is also on squatted land. Their kitchen, living space and workrooms have been converted from two ruined greenhouses, their garden from derelict and poisoned earth, and tomorrow the owners are taking the group to court to try and evict them (in spite of the fact that the local community and residents' associations support the initiative and attend many of their events).

So today I'm writing about ownership and property, alongside our Social Reporting week on Economics, and to question the violence which those who own and possess use against the people who wish only to live on the earth as real human beings together (the brutality of the US police against the Occupy protestes, for example or the UK police evicting the travellers at Dale Farm). And how, as the banking system puts a stranglehold around the resources of every country, we are being challenged to come together and defend our right to live peaceably.

And also to rethink our attitude.

Everywhere, from corporate land grabs in Africa to the IMF seizure of assets in countries such as Greece, the rights to common ownership are being eroded. Indigenous people are being evicted from their ancestral lands, small farmers from land they have cultivated for centuries. In Britain new laws around squatting are now going through Parliament just at the point that many are losing their homes. To stand up against these measures we need to overcome any fear and hostility we might hold towards the dispossessed. We need to see our heartless attitude as a result of centuries of indoctrination by the Empire, as the 1% have systematically and violently seized common lands and native territories everywhere and asserted their rights to domination.

How does this fit with Transition? Why am I writing about the activist initiative GrowHeathrow when I live in East Anglia? Because the resilience of communities everywhere in the future will be measured insofar as they can embrace a culture of shared space and fellow feeling.

As Rob Hopkins said last night, summing up his talk at Transition Norwich's Third Birthday Celebration, most of the projects within the Transition movement are based on co-operatives and community-held assets. A brief look at The Transition Companion will immediately show you a wealth of social enterprises, community gardens, farms, energy companies, bakeries, breweries. Shared knowledge, shared meals. At the heart of the movement is our radical breakout from individualism, a relinquishing of a culture that champions private and exclusive property, to embracing one that celebrates shared neighbourhoods and shared lives. Habitats made for the benefit of all beings, not just for 1% of the human population. Our challenge is to let go of our addiction to possessing things and instead hold those same things in common - tools, cars, food, land, space.

You might not want to sleep in a tent at Occupy Norwich, nor live in a converted greenhouse in Sipson, but the spirit that Occupy and GrowHeathrow embody is core to Transition initiatives everywhere. Ours not yours.

Watch this video. Be with them tomorrow.

GrowHeathrow; Poster for The Garden, a documentary about the 14-acre community farm, South Central, in Los Angeles. the largest of its kind in the United States. In 2006 the owners sent in bulldozers and razed it to the ground; well wishing photo sent to the GrowHeathrow photo campaign; OccupyBeloMonte (Dam), Brazil.