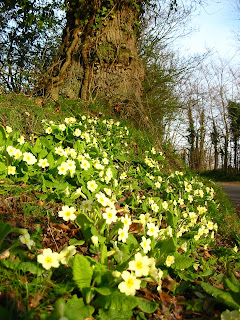 When Tom, Sorrel and I met in March to map out our creative workshops, it turned out that we had an artist in common. His name is Hundertwasser. This Austrian "painter-king" had a concept that informed his vegetable art called The Five Skins. These interlocking skins connect each human being with their environment. The first is your own skin yourself, the second your clothes, the third your house, the fourth your neighbourhood and the fifth the earth. One of his most famous monuments is a housing project in Vienna which he designed specifically so everyone could live in harmony together. The key to this harmony were small interconnecting terraces where everyone co

uld grow flowers and vegetables in the middle of the city. Last month our Topic week was on our gardens and the blog was so burgeoning there was no room for mine, so here it is! My fourth skin: the neighbourhood garden.

I think I made all my connections with people down these network of lanes where I live through the plants and trees. A few years ago we all came together to save our lanes from a development. We were all different and lived very separate lives in the way people do in England. We were the inheritors of all kinds of historical hostilities. But when we stood together in defence of the neighbourhood oaks, the bluebell woods, blackthorn hedges and moon daisy meadows all those unspoken difficulties disappeared. We still live in our differently shaped gardens, quietly behind hedges of elm and hawthorn, but there is a different feeling now between us. Everyone waves and smiles.

That’s what plants do. They bring people together. So what is happening in my garden is really my neighbour’s garden. It’s the neighbourhood garden – half cultivated, half wild – and all the exchanges that are going on there. 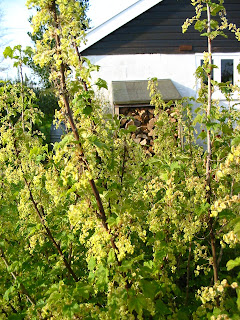 These are flowering redcurrant bushes in Julia’s garden next door where I have licence to pick as much as I like when they fruit. In summer we exchange greengages (from my tree), cultivated blackberries and honeycomb (from her allotment in London). Last year I decided to eat only fruit in season and with the exception of oranges and lemons, only local fruit. 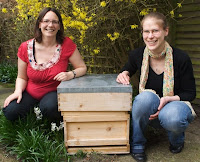 That’s when you notice what’s growing in the gardens as well as the wild neighbourhood – blackberries, rosehips, crab apples, plums and bullaces.

Elinor and Gemma with a Bungay Community Beehive. We just started up the first bee CSA in England. Mark bought the beehive from Julia and this Spring it’s going to house our first Transition bees http://www.sustainablebungay.com/.

Working Lane. Underneath my favourite damson tree, outside Philip’s studio where I am typing this blog. As I’m not on line at home I come here some mornings to work (as well as the library). The studio is in Philip and Irene’s garden skirted by a meadow and next to a pond, now glimmering with golden marsh marigold.

The Primroses on the bank (top pic) were taken on my way to take some tomato plants to David Moyse who grows some of the best tomatoes I’ve ever tasted. He gives me all his green ones at the end of the season and I make chutney and give him some in exchange. His grandmother used to live in my house when his grandfather was the head horseman at the local farm. 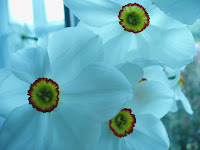 Narcissi on the windowsill. I love flowers in the house, but only buy local cut flowers or ones from my own garden. These are from Norman who has a market garden at the end of the lane and sells his vegetables in all the local shops (brilliant leeks and cauliflowers).

The Great Unleashing. These are flowers from three trees from the local walk that goes down by the marsh and round the pea and barley fields – wych elm, ash and goat willow.

The green moschatels (below) are also from the walk. These tiny woodland flowers that grow at the base of trees are unique in the flower world as they have five faces and are sometimes known as the town clock. Their Latin name adoxa means 'without glory'. 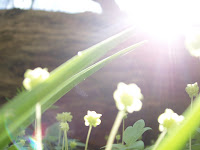 I love that name. It’s so Transition! We’re insignificant (as the flower guides would say) and yet when you look closely what extraordinary beings! We couldn’t have taken these atmospheric closeups without this brilliant camera Andy gave us after he came down to stay in a tent with his two nephews last August . . . his pictures of us all are what inspired This Low Carbon Life. It all started here under the apple tree in the garden . . . as indeed all good things do.
The Five Skins of Man from Hundertwasser: The Painter-King With The 5 Skins by Pierre Restany (Taschen, Cologne 2004).
Posted by Charlotte Du Cann at 09:54