On 2nd September I joined 19 other rebel writers to call to account the lobbyists and climate deniers who direct government policy outside their Westminster office. Here is a piece about that event and the role of writers-as-challengers to their conjuring of dangerous fictions. 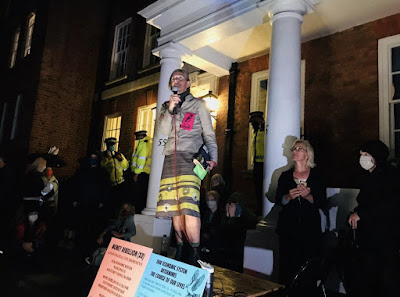 The next revolution – World War III – will be waged inside your head. It will be a guerrilla information war fought not in the sky or on the streets, not in the forests or even around scarce resources of the earth, but in newspapers and magazines, on the radio, on TV and in ‘cyberspace’. It will be a dirty, no-holds-barred propaganda war of competing world-views and alternative visions of the future.

Marshall McLuhan – Culture is Our Business, 1970

It is raining softly in Tufton Street and I am sitting in a doorway, at the feet of five police officers, listening to voices calling to account the neo-liberal lobbyists who convene at number 55. Long ago I came to this street to play with my childhood friend Gaye. Her father was a Conservative MP, as was my uncle who also lived here, beside these steps that by the end of this evening will be covered in fake blood.

This is not a story of nostalgia.

The Times columnist David Aaronovitch once asserted that no one in the privileged classes ever descends the social scale willingly. Except writers. Writers are by the nature of their trade rebels – rebelling against the past and its hostilities that hold us all ransom, breaking convention, the rigidity of the status quo, so that entropy does not set in and life can flourish. Their loyalty is not to their upbringing, but to their art.

Writing is how a velvet-collared turncoat came to be standing on this ensemble platform, decades later, with a quote by Marshall McLuhan up her sleeve about the future that now feels like the present.

I don’t know exactly what I am going to say in these few minutes but I do want to say why it matters that writers rebel, not only as individuals, but together – as we are here on this night in post-lockdown London: 20 of us holding scripts and books in our hands, reading poetry and fiery statements out loud with a police helicopter whirling above our heads. Who else can challenge the dangerous fiction, constructed behind these doors, and change the plot mid-sentence?

It’s an old story, the story of Empire, and thousands of writers have deconstructed its twisted plots through history, even in the trenches and the gulags, even, as Ken Saro-Wiwa in Nigeria wrote, in the face of certain execution. We know what we see: a story of domination repeated through centuries and continents. The question now is: how do we unstory it?

Writers – those true to their archaic function to hold people within the wild psyche of the Earth, true to what John Berger called the fraternal future – step outside conformity as a strategic act. Because they know the story of their time is not just theirs and they do not tell it just for themselves. This ‘powerdown’ enables them to listen and speak out on behalf of those without voices, for the creatures and the trees and all those who maintain and suffer the charade of civilisation in silence.

‘If you know yourself and do not know the enemy, for every victory gained you will suffer defeat’, quoted Paul Hilder from Sun Tzu’s The Art of War. A key reason the climate deniers and Brexit propagandists of Tufton Street broadcast a violent and hostile narrative is so they won’t suffer defeat. They have been trained in their dark nurseries to quash all feeling and fuel their will to victory – and they will sow every kind of confusion, blame and division among the ‘ruled’ in order to maintain the upper hand.

We are keeping our eyes open and do not swerve our gaze. We are not distracted by fake news, or intimidated by the bullish rhetoric of a comms-directed government. We know the difference between the myths that underpin life on Earth, and the fantasies that manipulate it. Words are our business after all.

We have long memories. We remember what it means to be human, beyond our economic function as a consumer or voter. We have the wild world as our ally and our ancestors stand behind us.

We can bring space and time into the small panic rooms the powerful command, and open the door. Like a warrior band outwitting the invader, we know this geography of heartbreak. We know the mountains and the forests and all the hiding places. Imagination is our finest tool and our attention is fearless. We have already travelled to the Underworld and back. We are in the long game and will prevail. In a fragmented time, we can cohere; in a culture of covering up, we will reveal. Our task is to remind people that they are not alone in their struggle.

When we speak of power, we mean the capacity to undergo change, to transform dark materials into beauty. The powerful cling to their bastions and buildings, their loyalty to form, and refuse to change their dragonish behaviours. But in a time of upheaval, no amount of authoritarian rule will prevent the consequences of destroying the vast and complex dimensions of Earth, anymore than it can control a tiny anarchic virus.

Their storyline is simple: we are the conquerors and we are in charge. We are more powerful than you and deserve your sacrifice. Our lust for power and riches has no end and we will defend the right to rule you with all the might and violence we can muster. You can find this ‘law’ inscribed in stone in ancient Assyria and Babylon, rejected by the Gnostics in the early Christian era, challenged by every slave uprising, peasant revolt and citizen rebellion through time. We can hear this voice in our own heads, inflamed by the headlines and opinions of media, and have learned when to hold our tongues. ‘If you know neither the enemy nor yourself, you will succumb in every battle.’

Sometimes barbarians who do not worship the city gods surprise us. In 1947, a poet writes the line, ‘I DO NOT LIKE MY WORK’, observing the decline of Empire, sensing the fleetness of reindeer hooves on the Northern rim. (W.H.Auden, ‘The Fall of Rome’.) In 2020 the unimportant clerks of flu-infected cities say: we don’t want to come back to work, and the story of civilisation falters irrevocably. Tonight in Westminster the tourists have stayed away, the posters of the theatres have disappeared.

The show is coming to an end. We’re writing the final act.

You can watch the Writers Rebel Tufton event here.

Posted by Charlotte Du Cann at 10:45 No comments: