Hard rain on the parade

The flags hang limply in the rain down the High Street. No one has removed them after the Jubilee, as this summer it appears the populace are in a continual celebration of the Kingdom. Last week the Olympic Games and its £27 million opening gambit were heralded by torch-bearers running through the town. As I write the sound system at Latitude booms in the air from several miles away, and everyone has been locked into the site due to the weather.

But my attention is not in these places. I'm watching the rain. The shop keepers are watching the rain, as the holiday makers stay away from the beach and their tills. The farmers are watching the rain as it soaks the corn and the potatoes. The trees are empty of fruit down the lane, the grasses high as houses. There are slugs everywhere, devouring produce in the fields and gardens (£8 million's worth) like an apocalyptic curse.
We don't have sun, but we do have water. In other places it is the opposite.

Charles Eisenstein, author of Sacred Economics, who is speaking next week in London, says we have a task ahead of us: to transform the damage that has been done by industrialisation and reclaim the land, as well as our true sovereignty, the commonwealth of the people. From an old paradigm, standing in the High Street, disconnected, it seems impossible, but from another perspective, standing on the earth, looking at the future, it looks like the possibility of starting again.

History depends on our attention. Where we place our attention confers value and significance. That's quantum physics and human nature. Attention can keep the flags flying and the illusion of supremacy going, it can hold people on pedestals up as small gods. Or it can focus on the real facts of the matter and see climate change happening in the backyard. Distracted by entertainments, you can't see what is happening in front of your eyes. You don't notice the weather. You don't see the London allotments torn down to make a hockey stadium, the people displaced in Guatemala for EU biofuels, you don't see the treatment of the cows, or the dairy farmers, when you buy your cheap milk, you don't see the scam of the banks who have created 97% of our money supply out of thin air.

The nationalistic parades and the media that trumpet them are the circus that keeps an old story in place. The Athenian civilisation that bequeathed us the idealistic sporting arena, also gave us a skewed "left hemisphere" way of seeing and a "democracy" that works for the rulers, rather than for the ruled. It has made the culture of the City superior to all lifeforms on earth, a legacy we have inherited and still uphold to this day. But this cultural story, with its fairytale shows and bloody arenas, is not the only narrative that is going on right now. It has never been the only narrative going on. People have been holding a torch inside them for hundreds of years in the mountains and the fields, as civilisations have risen and fallen, as they have sent their armies to conquer the world for resources and slave labour. At some point the people start watching the rain and realise there is another task at hand. For the planet and for ourselves. 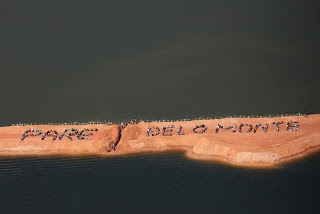 When you do, you discover you are not alone. There are millions of us out there. Some of us saying one thing, but thinking and feeling another. Some of us are finding our voices and speaking out. Some of us are listening, turning out attention away from the parade. We're not just in the town, or the city, we are in all lands. The empire dominates, as it has done though history: it crushes protests, wins arguments, forces people off the land, ignores the heart. But one thing it has no power over: it cannot force our attention. It can't buy love.

And it can't stop the rain from falling.

From One World Column

Images: cover of Sacred Economics; protest in the Amazon against the Belo Monte dam.
Posted by Charlotte Du Cann at 12:28