The Fabric of This World 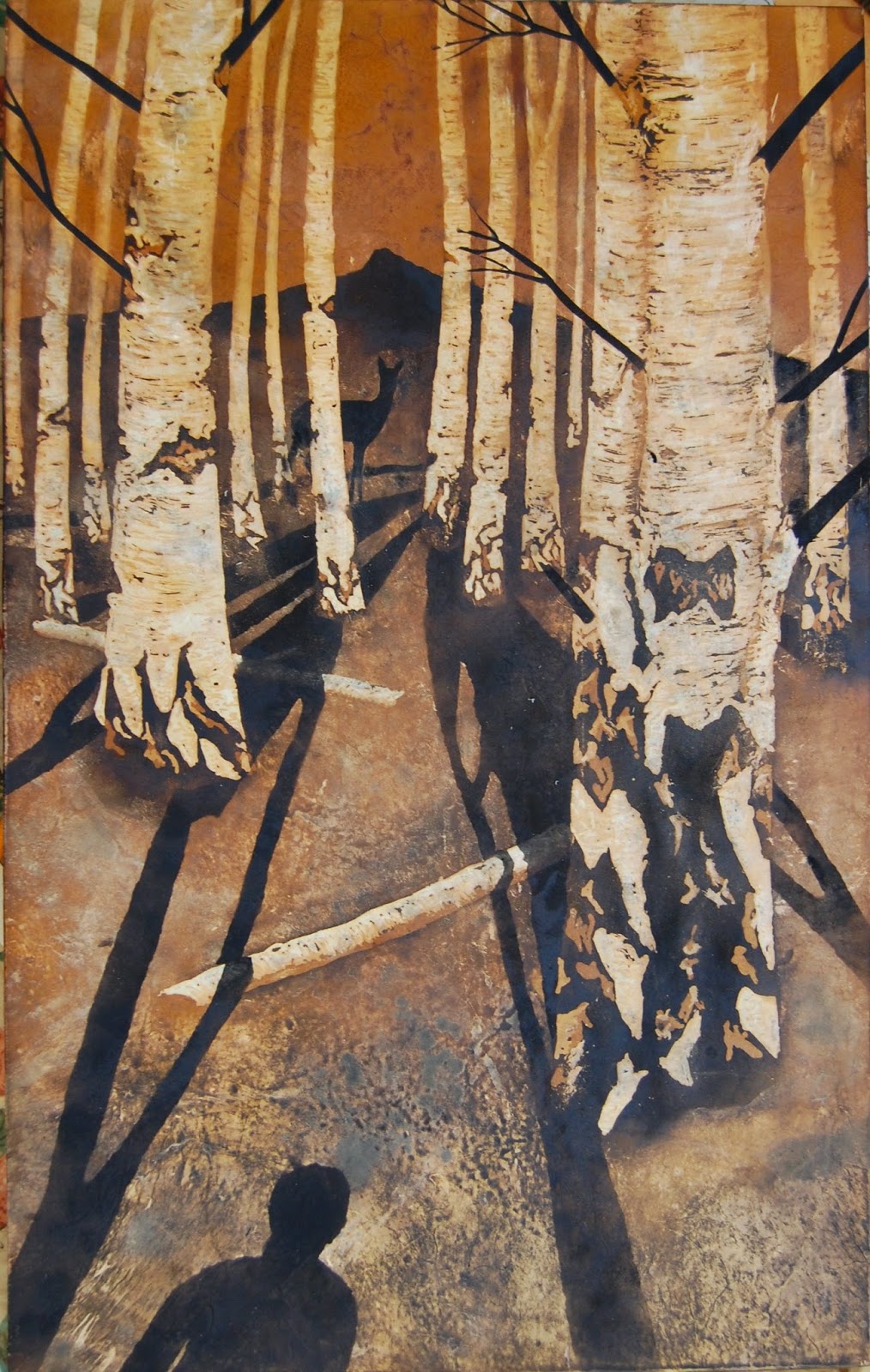 In celebration of the new Dark Mountain anthology, here is a quick peek into the artwork pages (16 in all) that intersect the texts. As well as a photographic record of the four Uncivilisation Festivals, there are two sections of work in various media, from gum arabic to found materials, digital montage to cyanotype.

Dark Mountain art is hard to qualify or put into a box, but what has shaped and defines this selection is the intense focus and relationship each artist has with the matter in hand — stuff that most of us in a 24/7 whirl of activity do not have eyes or time to notice.

Why do we need art? Because only when we pay this kind of attention can we see close up the extraordinary nature of earthly alchemy, or the movement of the heavens above us. That what science drily calls ‘eco-systems’ are in fact beautiful and meaningful patterns that intersect with our own intelligence and planetary presence in a way words cannot easily describe.

Like the Earth, these images are the work of collaborations, of projects — the results of waiting and watching and movements over time. Way marks and tracks, blueprints and shifts: a map of mountains soaked by the rain, the blue zigzags of a Patagonia glacier.

Each one tells a story caught in a glimpse: the story of a pilgrimage through Walthamstow, the story about a collection of plants made from abandoned technology, the story of the sun’s yearly trek across the sky in a grandmother’s house in the far north. The fabric of this world.

Here is one behind the book’s centrefold picture: the story of the man who follows the deer.

Roe Deer in May Birch by Thomas Keyes

Thomas Keyes first appeared in Dark Mountain 3 with a compelling recipe for black pheasant stew. He is a forager and artist who lives in the remote Highlands, with a wood behind his house. What inspires his art are the materials he comes across when he roams the land. Although he fashions works from a wide range of natural stuff — from mushrooms to wasps’ nests to oak galls — his signature canvas is parchment made from the hides of (mostly roadkilled) roe deer; his paints the tar and smoke made from the bark of the tree he loves more than any other: the birch.

‘I like the self-referential nature of the subject of birch and deer. The birch trees are endessly fascinating and so expressive, the more I see them the more I want to paint them. People from the city might see a forest with deer as an image, a pretty picture, but for me they are an important practical part of life. Some people get the paintings and some don’t.’

Keyes is one of the artists taking part in The Foraged Book Project with Fergus Drennan (an Uncivilistation regular) and James Wood, and like many others there is no separation between the stuff he uses and the subject of the painting itself. He uses the scars in the hides to form the kinks in the trees bark for example.

‘Foraging is a way of interacting in a rural environment and of noticing patterns: you start to see exciting things everywhere and have a reason to go places, to be on high alert. I wanted to make something artistic out of the material I foraged, but it didn’t go anywhere until I came across the deer and then I felt obliged in some way.’

The materials came together by chance. The parchment he found was the best way to preserve the deer skin. He had been making the birch tar (used traditionally as a sealant) by boiling it up on an open fire as an experiment. But his intense focus on these two lifeforms is not just because of their look and proximity:

‘Basically birch trees have always been there with people in Europe, as fuel, as medicine. They are one of the constants, which like roe deer, we’ll see into the future. Both have actually increased because of us and agriculture. They are two species that it’s safe and important to form a relationship with. So much of nature is in drama and disappearance, it is good to know there are some things we can count on.

‘What’s really interesting about Dark Mountain is that when you get people together to talk about the premise of collapse suddenly you are talking about what is actually there; whereas before when I was around people who did not accept that premise they were constantly fighting their corner, or arguing the point, with stats about peak oil etc and no one was looking at what lies beyond that. Whereas when you accept the premise you can have a look at the natural world, which hasn’t gone away. There’s quite a lot of it left, bad as things are.’

The paintings beckon a way back into the land most people now feel divorced from. Deracination and lack of connection with the natural world is one of the ways a dominant city-based narrative keeps a hold on our imaginations. There’s nothing out there, it’s all gone! In a time of unravelling however, belonging and being anchored in a place become increasingly vital. In a piece written for the present volume, ‘Finding Common Ground’, Keyes looks back at a land where his own connection was severed:

The parish I reside in still has barely half the population it supported up until the mid 1800s. Incomers are a necessity. As an Ulster Scot I come from long line of incomers: Ulster Scots are professionsal incomers and have played no small part in the colonisation of most former British territories. Clan Hanna were made enemies of the crown and send from Argyll to County Monaghan, beyond the frontier of the Ulster plantation in 1640. My direct, soil-based experience of that land ended formally only a few years ago, when my great aunt Edna Hanna died and the small farm I had visited as child became out of bounds. One break in the chain in 370 years, and it’s over. My children will only ever enter that land as trespasssers, with no emotional connection to it. In fact, once I am not here anymore, they probably won’t bother; their children may never even hear of it. The home those people built, the fields they worked, they churchyard they’re buried in, the relationships built over generations: all gone. I’d be no more home there now than I am back in Scotland, walking through the fading traces of other families’ tragedies.

In many ways, Keyes writes for most of us who no longer live in places where generations of our clans, families or tribes, have interacted with the land. We have now to dig deeper, beyond history, beyond our familial circumstances, to get back to an Earth where we feel at home with all our relations — rocks, plants, animals, trees. An immersion in the shapes and patterns of the natural world frees us from the grids and enclosures set up by Empire, in our physical forms as much as in our imaginations.
When you look at the painting you find yourself following the deer, down the wild track through the trees, toward the mountain — as our ancestors have always done through time. It feels like the only path you want to take.

Thomas Keyes is an artist, gardener and parchmenter based on the Black Isle. He is currently working on the Wild Project and The Foraged Book Project and updates thomaskeyes.co.uk with foraged art.

Calling all artists! We are still open for sub- missions for original work (pain -tings, drawing, photo -graphy) for Dark Mountain 6 as well as for our next cover. Please look at the submission guidelines for details and send to charlotte@dark-mountain.net. Deadline is 18th May.

Dark Mountain: Issue 5 is available through our online shop for £12.99 – or subscribe now to future issues and get this one for £8.99.