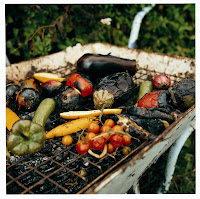 It was a great party. Unit 5 was wreathed in fairy lights and everyone joined in with the show -we watched the In Transition film, became "spect-actors" in an impromptu theatre piece, improvised by Tom Harper, danced to cycle-powered music provided by Tom Foxe, Fret 6 and The John Preston Tribute Band.

The Transition banner flew on the walls alongside Reskilling's innovative bunting made from old clothes.The Sheriff of Norwich, Tim O'Riordan opened the proceedings. Tully gave us an update of what we have all been up to in the last year.

But perhaps the star event was the ABUNDANCE of food brought by the Transition Cooking Bee who brought trays of delicious low-carb (on) snacks which we ate gleefully accompanied by Golden Ale (from The King's Head a stone's throw away), Jonty's local cider and organic apple juice - some pressed earlier at the Bluebell Allotments.

Spinach tartlets with organic spinach from Mangreen garden
Pumpkin pies with organic pumpkin from Mangreen
Eggs from a couple of miles away
Plum flapjack with Mangreen plums
Apple cake with Elena's apples (from her nan)
Tomato chutney - some from Mangreen, Andy also brought in some tomatoes
Pizza with Charlotte's organic tomatoes, garlic and chilli
Onion bhajis with local onions (from Paddocks Farm Shop, Mulbarton)
Organic dried chick peas for Falafel
Homemade bread with flour - a mixture some from Essex, some organic
Pastry - very local flour - given by Tully
Honey - from Orchard Apiaries.

Many thanks to Elena, Naomi, Alex, Mick and everyone in the Mangreen Kitchens & Gardens.

This winter TN will be compiling recipes for our Low Carbon cookbook. If you have any up your floury sleeves, do get in touch infro@transitionnorwich.org.

Left: low carbon wheelbarrow grill (not from the party but a from a great community allotment cookbook, Moro East, by Sam and Sam Clark, pictures by Toby Glanville - book review to follow). Right: A "non-personality" shot of the Band from Downham Market and Villages in Transition.
Posted by Charlotte Du Cann at 14:00