Calling An Amnesty and Other Prodigal Returns 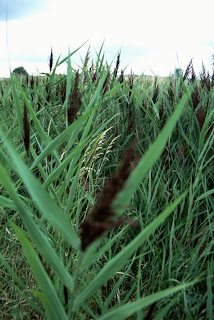 Your carbon debt is HUGE,” said Josiah on the telephone this morning. We were discussing last night’s Copenhagen Climate Emergency in Norwich and Tuesday's post about bathing in the hot springs of South America. I was about to leap to my own defence, armed with a “yes but I don’t have any children” or one of any number of possible parries. But I resisted the temptation. Because Josiah and I are co-ordinating the Second Transition East Regional Gathering in Diss this week, because we’ve been working at each other’s kitchen tables over the last year on local and sustainable food and all things Transitional and because, well, I like Josiah and his two boys, Reuben and Tristram and I'm looking forward to meeting his daughter, Iris, (now two weeks old) .We’re on the same road together. We can’t afford to fall out with each other.

Besides, who hasn’t got a huge carbon debt in the Western World?

We need to be prodigal and return to our senses, but we’re not going to do that if we are burdened with a debt we can never repay. If you undergo a radical change of heart, you don’t want to have to deal with accustations and judgements for your past follies as you walk back down the mountain. At the Climate Change talks last night it became clear in order to keep our emissions below that scary figure of a 2% rise in planetary temperature, we are going to have to drop our fossil-fuelled lifestyles pretty damn quick. And those of us who have used profligate amount of oil in the past, have lived in the fast lane, know the ins and outs of priviledge and glamour, know exactly how to do it. Because if someone like me can change, anyone can.

The fact is we didn’t know until now. We were brought up in illusion. I had never considered carbon emissions until I joined a bunch of community activists in Oxford and someone said something mildly about how much fuel aeroplanes use. The year was 2001 and I had spent the last ten years travelling in aeroplanes, buses, trains and cars across the Americas. When you know you know and you can take action - so long as you are free to do so. One of the speakers last night was the economist and driving force behind the New Green Deal, Ann Pettifor. She is famous for leading a worldwide campaign to cancel approximately $100 billion of debts owed by 42 of the poorest countries Jubilee 2000. The moment you cancel the debt, you can start to liberate yourself from the constraints of Empire.

The consequences of our life-style have now become clear. Since the 70s our carbon use has trebled. Climate change is directly due to our increased consumption, our flying round the world, our industrialised agriculture. None of us knew this at the time. Not because we were ignorant but because we are products of a civilisation that has deliberately blindfolded us to the effect of our actions, distracted us with entertainments, numbed our emotions with feel-good highs and hostility. We can do something about those things. We can wake up and not take those flights. We can ask questions rather than escape into our minds. We can join up and share food and houses and tools and fires. What will hold us together is our human relationships. The feeling that we want to see each other again.

So this is a call for amnesty for all prodigal sons and daughters. Forget the debt. Come home. 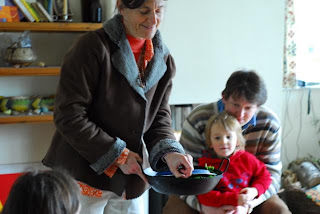 Above: reeds at Minsmere Marshes, Suffolk - the plant tribe at the root of Western civilisation and the world’s first source of paper by Charlotte

Below: Me, Josiah and Reuben with a pan of nettles for soup - Spring Tonic Walk, April 09 by Helen
Posted by Charlotte Du Cann at 16:24