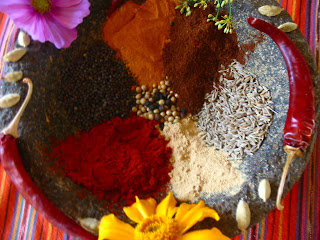 I am a Stranger amongst Strangers, yet curiously feel at home as I head towards Spice Paradise on a rainy Saturday night. I know this street even though I don’t live in NR3. I lived in inner city neighbourhoods for a big chunk of my life, Westbourne Grove in the 60s and 70s was a London W2 Magdalen Street. I would lean out of my window at twilight and hear the slap slap slap of the chapati makers in one of the six Indian restaurants along the Grove and smile as our cat vainly licked his turmeric-stained paws, evidence of his tandoori chicken raids from their dustbins. My student life was spent among sweat shops and sweet shops in the slumland heart of Birmingham. Wherever I travelled thereafter the scent of cumin and coriander came with me: those Eastern spices became an indelible part of my kitchen.

So the “only South Indian restaurant in Norfolk” was the obvious choice when I invited Ed Mitchell and Gary Alexander from the Transition Network to meet over a Cobra and a dosa. “TN has organised a big celebration here next week,” I said and outlined the plan: puppet workshops, art exhibitions, craft stalls, local bands, performance . . . the street’s changed a lot, said Ed, who used to promote reggae bands just beyond the flyover where all the action will be on

Saturday. Twenty years ago when he was in “Dev” at UEA there was a sharp edge. Now some of that edginess has softened, relaxed. There are rainbows in between the dark buildings. This neighbourhood restaurant is like that too. Light, spacious, colourful (predominantly a shocking salmon pink). South Indian food is feminine in comparison to the warrior cuisine of the North: airy dosas made of rice and lentils, fragrant fillings and dipping sauces, sweet coconut, sour tamarind. It’s a friendly place. Everyone was smiling. Even on the busiest night of the week we were left in peace as we discussed Transition comms for over three hours. I haven’t felt so relaxed in an eating house like that for a long time.

Afterwards we walked past Aladdin's, the café and patisserie where many of the Celebration’s planning meetings have taken place, and some of the street’s international grocers. If you have time on Saturday check out the great Indian spice shops: Mr Miah's and the newly open Spice Land where the owners are from the key spice territory, Kerala (the shop owners will be "Living Books" for the day so do ask questions about food). Cooks from the One Planet Community Kitchen buy sacks of rice and bags of cinnamon and c 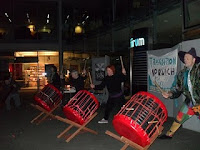 umin here. These are the exotic grocers that whet your appetite with their piles of world produce. The scent of a thousand dishes meets you as you stand among stacks of plantain and yams and gaze along the crammed shelves. For me, now a country dweller, this is the city. Something you can’t find anywhere else. A global meeting place where everyone can feel at home. Listen out for that different drum beat!

Spices from the One Planet Community Kitchen; marigold, cosmos and fennel seeds from the garden; Aladdin's interior; TN and Taiko (Japanese) drummers outside Forum in March.
Posted by Charlotte Du Cann at 18:57