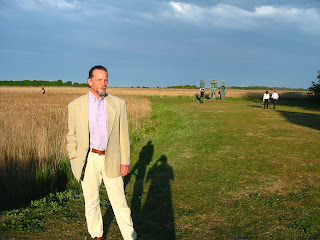 Last Sunday our neighbour Irene appeared in the garden with some tickets in her hand. She and Philip couldn’t go to this concert, would we like to go instead?

So that’s how we wound up in the new Studio at Snape Maltings amongst an audience of grey haired smartly-dressed people, drinking white wine and talking to each other intently like a gathering of hawks. It was the final concert in a weekend of Beethoven and Schubert– two late chamber works from the maestro composers. One an intense and unbroken struggle with form, the other a sublime intoxication with harmony. The Belcea Quartet were equally intense and brilliant, and I spent most of the first half marvelling at their sychronicity. I hadn’t listened to classical music in years, though I spent most of my youth carrying a cello around and hanging out with professional musicians, so I know how hard these works are to perform. 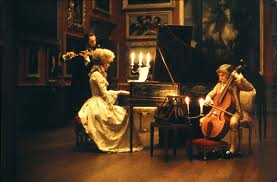 Then I closed my eyes. The Schubert quintet is famous for its intense adagio, for its beautiful slow sustained sounds with plucked notes underneath. It’s the kind of music that you don’t want to stop, because it seems so perfect.

But where was this music taking me?

Our culture is built around events like these. The people who go to them have been visiting these concert halls, these opera houses and theatres all their lives. A knowledge of these classical works defines us as civilised, educated and refined. At the first Heart and Soul, Arts, Culture and Well Being meeting at the Norwich Playhouse the question was asked: what will happen to this culture in Transition?

It was a good question because entertainment – high or low- is all about shifting our attention away from the present moment. When we’re engaged in listening to haunting sounds we’re not looking at the stuff that’s happening outside. We’re escaping into perfect harmonious spheres, into fiendishly difficult forms, being reminded of things that were or might have been. In history, in our own past. I’m remembering the times I came here to Snape, sailing up the river, to listen to Britten, Bach, Shostakovitch, Rostropovitch. . . going backwards to the 1975 to Kubrick's film, Barry Lyndon which used Schubert's music to chart the rise and fall of the rogue aristocrat. 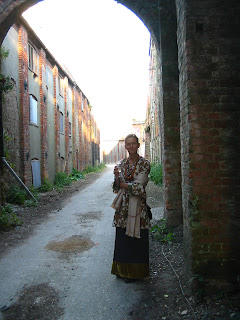 I’m remembering how it was to work 60 hour weeks as an event manager to keep a community theatre (also housed in an old maltings) running, the strange sounds that came and went in the building: Tibetan monks blowing giant horns, arch-druids playing fairy harps, virgin choirs singing about loving Jesus, preachers playing cinema organs, children maniacally toe-tapping as their dancing teacher shouted: You can be special! You can be a star! Sometimes as I handed the performers a cheque or brought them a drink on the house we exchanged our looks of exhaustion.

What I remember most is the repetition, the kind of repeat cycles Sebald writes about in his melacholic work about this coast, The Rings of Saturn: the actors repeating the same lines, the musicians playing the same phrases, and how it felt as if I were in charge of some kind of machine that only cared that this show was repeated over and over again. And how our ancient folk wisdom warns us about not listening to the fairy music and getting lost for centuries.

At the interval I stepped out to the grassy terrace that looks over the marshes of the Alde river towards Iken church. The warblers were singing in the reeds and the swifts squeaking in the sky. The great red chestnut trees were in flower and the floor was scattered with white poplar catkins. It was a beautiful evening at one of the most beautiful concert halls in the world. It didn’t take me back, or away. Everything was here now. 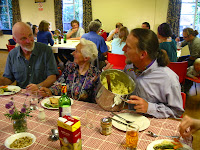 In Transition we hold events of a very different kind, in humble venues: village halls and libraries. We organise seed swaps, community suppers, film nights, energy days, bicycle rides, picnics, talks, workdays. They are not glamorous, grand affairs, nor expensive to put on; nor do they confer any kind of status or come with a longing for a place just out of reach. They bring us to the present moment, to look at a future that is uncertain, in which our decisions are crucial.

Last week a group of us went to Tom Abbott’s barn on the edge of the common in the Saints. We said our names out loud and where we came from and the organisations we were all part of: Greenpeace, Suffolk Wildlife Trust, Sustainable Bungay and then we watched the documentary, Inuit Knowledge and Climate Change. 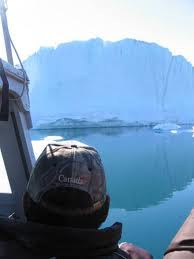 The people are not beautiful and the film is not beautiful. What is happening to the Arctic is not beautiful though the landscape takes your breath away. The elders of the village speak to the camera about how the temperature has changed, about the shift of the winds from North to East, how the fish is contaminated, the seal fur degraded. How the icebergs they consider as living beings no longer visit the bay as once they did. They speak about how they were trained as children to go each morning out into nature and observe everything - animals, wind, clouds - to sense the living fabric of the land and their place within it and how that place is being shaken at its roots.

Afterwards we debated the difference of consciousness between the Inuit and the visiting “expert” scientists – one that sees the people as intrinsically part of the land and the second that acts as if seperated and in control of it. The Inuit, for example, say the radio collars on polar bears interfere with their hearing and their ability to hunt and thus drive them to starvation. All their criticism seems to be directed at the “wildlife biologists”, observed Martin (himself a scientist) wryly, rather than the Southerner’s way of life that is causing the climate change. We spoke amongst ourselves, each of us in turn, telling our story. How our education teaches us to think our worldview is superior to anything indigenous people might see or say, including that native land knowledge we hold inside ourselves.

On his deathbed Schubert requested Beethoven’s late quartet to be played as his body slipped away from the earth. It was a radical work for its time and in many ways heralded the disharmonious sounds of the modern world to come. It was there that Sunday, like a shadowy dream, and then it was gone. But the film stayed with me. Because it was about life. What it was saying affects the marshes I was looking at and the migrating birds in the sky.

The glaciers of the deep North are melting. It's not time to be distracted by fairy music, to get lost in shadows. It’s time to go out and observe and connect. We need the event to come together, to gather and to pay attention collectively to something we need our wits and our imaginations and our hearts to engage in. Because we’re not the audience anymore, we are the players. 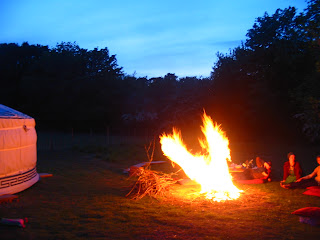 Pics: Mark at Snape Maltings; elders and iceberg from Inuit Knowledge and Climate Change; still from Barry Lyndon, 1975; drinking wine before the concert; Happy Monday at Bungay Community Kitchen; talking around the fire by Kris and Eloise's yurt.
Posted by Charlotte Du Cann at 14:51