ARCHIVE: On an ordinary summer's evening in a Transition town . . . 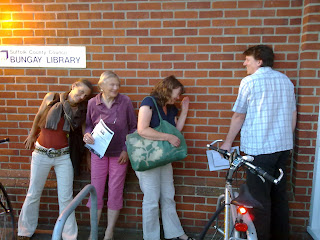 We're just on our way to Cathy's orchard and meadow for the Sustainable Bungay annual picnic and games (this year it's boules, instead of our usual rumbustious rounders on the Old Grammar School Field). So here is a summer celebration (from July 2011) of some of the people I've met in Transition and the friendliness and fellow feeling you can find in downshifting times. The above pic was taken after our July 2012 core group meeting, as we feel the heat of the Hot Wall and slip into a moody album mode. 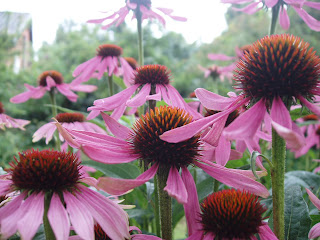 "It’s definitely the stick," said Mark as he stood with a piece of wood in his hands. It had been inadvertently donated at Sustainable Bungay's Give and Take Day and suddenly reappeared in our hallway. From the outside it looked like a shiny broom handle but it wasn't: it was a fighting stick belonging to a young man mortified by its disappearance. But you’d have to be a warrior to know that. 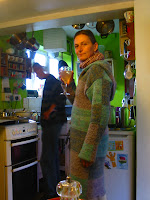 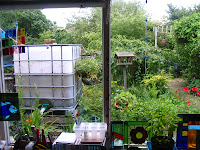 "Well, you’re rich in other ways," said the man at the Financial Instability workshop at the Transition Conference after I had detailed my downshift from The World of Interiors to Sustainable Bungay.
"I really am not rich", I replied.
"You are rich in social relationships", he insisted, frustrated with my density. "In quality time. You are abundant in other ways."
"I have very little", I replied. (which is not strictly true because like most people in this country I have chairs and tables, pots and pans and all manner of basic essentials). "What is wrong with nothing? Why do we have to be wealthy at all?"

It’s an ordinary evening in a Transition town and we’re on our way to our meeting at the Library. But first we have to meet at the pub with the Community Bee Group to celebrate the success of our Beehive Day (which I’ll write about tomorrow) and then unload Eloise’s van full of information boards and select some just picked fruit from the back of Cathy’s car. Cathy runs the Abundance project and swapping our produce and plants- at our meetings, in the Library community garden- has become a way of life. So here we are in the car park with a stack of boards and punnets of cherry-plums and blackberries meeting in a damp summer in a difficult time, swifts whizzing round the roofs, echinacea flowers full of bees. 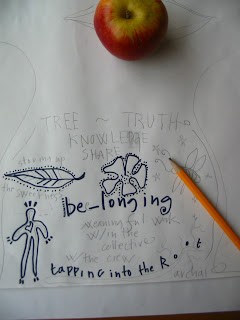 At the Transition Conference we all did an exercise. We had to imagine a group we longed to be with in the future. I am no good at visioning and all I could think about was the fact I would be 65 in ten years time and how weird that was. And then I realised I don’t long for a group of people because I am already with those people and I had met them three years ago in the theatre down the street from here. And what was difficult to feedback to my fellow Transitioners in the canteen in Liverpool was the fact that it wasn’t the individuals in the initiative that made us matter to one another, the way we are used to people mattering in our lives, as special friends, or heroes, support systems, as possessions and dependencies. My important relationships. 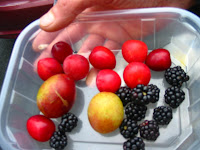 You can’t see the field from the outside, you have to feel it from the inside. You recognise it when you are in it because you are doing it along with everyone else. In fact you can’t be in it unlessyou are doing it. 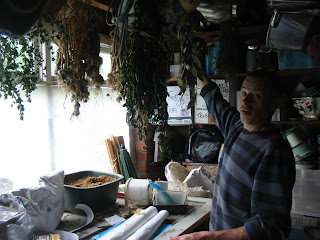 Because Transition is not a noun, it’s a verb.
Photos: standing against Bungay Library wall with Daphne, Lesley and Josiah; echinacea by the carpark; with squash wine in Nick's kitchen; rainwater storage; Cathy's Abundance fruit; Nick with harvested herbs.
Posted by Charlotte Du Cann at 18:43