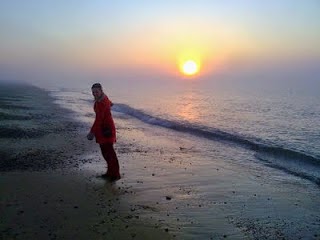 Happy Summer Solstice everyone! My copy of EarthLines magazine arrived today, so I am publishing the column I wrote for the previous Spring issue - an upside down post, as it was written at the turn of the year. Today it is a beautiful midsummer day and we got up at dawn to see the sun rise over the sea. Outside the barley fields are stippled with poppies, the larks are singing, grass snakes basking on the compost, the garden filled with peas and beans and clover, roses and long grasses. Later we will have a picnic in the dunes and go for a swim. It's been a hard time in a fallow year, but today is a day of light and air, a blue day, and I am walking out . . .

Today is a halcyon day, one of the fourteen that fall each side of the winter solstice. Years ago it was believed that on such days, the mythic Alcyone, transformed into a kingfisher, could nest by the shore in peace because the god of the winds her father had calmed the waves.

I am taking an unusual break in a stormy time. Outside the rivers are retracting from the flooded meadows, and the sun is low and radiant in the sky; its tawny light suffuses everything. I am attempting to tame the huge hedges that surround the garden with a pair of shears: hawthorn, elm, oak, cypress, ivy. Pausing for breath something comes to me I do not expect. The fragrance of violets, and the sound of a blackbird singing quietly to himself in the rockrose. Spring embedded in winter.

Sometimes we need a lucky break, a halcyon day when we can rethink things and notice what is under our feet, or lies embedded deep inside ourselves. Sometimes this comes in the form of a stranger, reminding you of something you had forgotten, and sometime a handful of midwinter days you wrest for yourself, so you can practice your song for another year.

An alchemical conversation
I’m talking with Chris Thornton from South Australia. He has driven from his native Midlands to hold a conversation about Transition and communications which is the subject of his PhD. He is researching how Transition can make a space, to reconfigure our sense of self, as creatures that live in the wider social and biological sphere. How communications can shape a new kind of personal narrative, that includes human and non-human others.

How do we do that in a culture that is focussed entirely on individualism and perceives the world – including the wild world – as objects under our control?

How do you start to fulfil your objectives? he asks me. I laugh and say it doesn’t really work like that, with agendas and remits, from theory. Look, I say and point to the box that sits on a table between us. It’s filled with differed coloured apples evenly spaced from one another and lined with the summer edition of the newspaper I have been working on all year.

Here are the apples we picked in the orchards of the Emmaus community in Ditchingham on a sunny day last week. You can read everything into that box. You can read relocalisation and climate change and the economic downturn; the fact I am storing apples to last all winter in my larder. And if you look at the page, it’s an interview with Anne-Marie Culhane about the Abundance project.

That’s where, like many people, I first came across the idea of redistributing fruit in the community and started to write about it. It’s the basis of all the grassroots media I have been involved in. Now think about an 24/7 apple bought in a supermarket, flown in from Chile or somewhere you have never been. That apple doesn’t say anything. It is just an object that you eat every day, as a global consumer. These apples however say everything about us as activists, our reconnection with neighbourhood, winter, the earth. They are all about relationship. Key to taking us back into that relationship is the artist.

Gary Snyder once said that artists act like mycorrhizal fungi, transforming old dead thoughts and liberating energy from the forest floor. They are integral to the vitality and meaning of the community in which they live. That’s why, for me, any kind of redemptive cultural shift has to have creativity at its heart.
Sometimes you wait a long, long time for someone to ask you for the knowledge you have been holding in your heart, it seems for an aeon.

Outside, after the conversation, nothing has changed. It’s the same world. My inbox is still flooded with requests to save the tiger, the rainforest, the NHS, how we can halt another fossil fuel frenzy from destroying another pristine place on earth. But something inside has changed. A knot has untied. I realise I'm not waiting anymore. 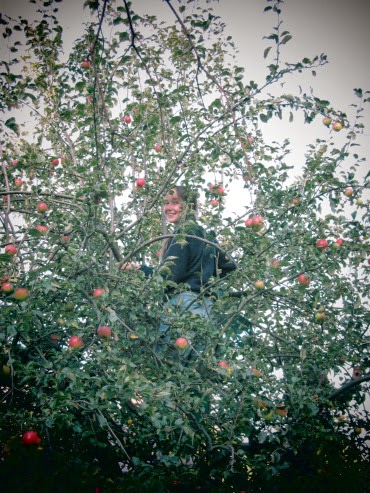 An alchemical meeting
I am in Bethnal Green with fourteen contributors to the book, Playing for Time. We are exploring a section of the book about transitional arts practice, how it can be defined through the diverse practices of the people in this room. On the floor is a map of the book with its many sections laid out in bold aboriginal colours: land, water, rites of passage, food growing, activism, ancestors, reclamation . . .

Is this a key tenet of a collaborative practice? we ask each other in pairs, as we test nineteen of them out. I have a small clipboard with Change written on it, Anne-Marie has one with Thinking in Systems. We are engaging in a dialogue, how allowing change keeps a door open for other things to come in and how the artist has to hold that possibility no matter how hard the wind is blowing to shut everything down in the room.
When you think within the ecological systems of the earth, you are not stuck in the tramlines of argument, I say suddenly, you are not stuck in an old story. Maybe it’s not even about a narrative with a linear sequence, but takes another shape entirely.

Anne-Marie laughs. Outside the leaves of the cherry trees have turned amber and gold and float past the elegant 18th century windows. Sometimes you don’t know what you know until someone asks you the question and then waits for the answer.

We learn to wait because we don’t know the answer yet. It is not where you think it is. Some of it is embedded in the apples in the room, and some in the spark that reignites the relationships we once had by virtue of being human on this planet. One thing I know: it’s the artist who hosts the space in which that reconnection happens. 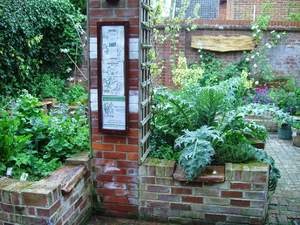 Next year I am curating a garden. It’s a small garden in a small town, created four years ago by my local Transition initiative, Sustainable Bungay. It sits in the courtyard of the local Library, and this winter I am designing a programme of events and workshops around the plants in its central bed: woad, indigo, dyer’s greenweed, yarrow, St John’s wort. Each plant in the Dye Garden is a portal through which to look at our key relationships with plants: the fashion industry (cotton), the use of colour (madder), the rural world (hemp). We are surrounded by textiles and yet we never consider them. What would the world look like if we did?

One tenet I learned from paying attention to dreams: if you stop and pay attention to small things great riches will be revealed. The humble leaves of woad become a doorway into the fabric of the world. The plant takes you back in time, to the archaic and medieval worlds, it puts colour and yarn and imagination and belonging back into your hands. Takes you into blue.

The technological world goes so fast and furiously that we never get to look deeply and truly at the wonder of ordinary things. We never really know what we know. So though we imagine we can only properly experience the world by visiting every desert, hill and city, we only ever know it superficially as consumers. You can’t possess the earth, you can only behold its beauty and complexity when you become part of its vast and interlocking systems. You might catch it just for a moment, but that moment brings everything your heart desires into play. You just have to make the time and the space.

EarthLines is a magazine dedicated to nature, and today I wish I could write more about the natural world, which is the deep love of my life. I wish I could tell you I have spent this year up the wild mountains of Britain, or followed a Blue Ridge creek in the course of a year, or followed the footsteps of Patrick Leigh Fermor across Europe, and then written of all my adventures. I wish I could share the insights I once had under a madrone tree, or the medicinal properties of wild indigo.

But the truth of the matter is I have spent this year working with people, in small spaces, editing pages of a book and a newspaper, and all my encounters with the wild world have been ones that have caught me unawares. A summer dawn among the dunes, a sea holly bush covered in blue and tortoishell butterflies, swimming down the Waveney alongside rainbow-finned fish. A deer in the headlamps as we travelled home down the back lanes. The bright new moon and Venus just before the storm surge. The big places, deserts and the hills of other geographies, now lie deep inside in my memory: Mexico, Arizona, Chile, Greece. They frame every small action in my home country. Sometimes the scent of violets brings them back. A kingfisher spring in sere winter.

Why do I not strike out more into the wind-rippling marshes, march along the Eastern seaboard, catalogue the mushrooms as I once did in my local wood? Some part of me knows that unless we can join forces as a band or network we will lose hold of the places and creatures we love, that to connect in the spirit of regeneration we need conversations and gatherings, an alchemical space where things can turn around and we can forge another identity for ourselves as a people. Where we can let go of the arguments that divide us and divest ourselves of an old and unkind story. 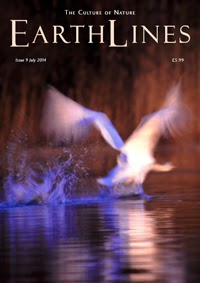 What breaks up the false dominion of monoculture is the presence of diversity and kinship, the sound of many different voices in unity. The meadow, Darwin once observed, is resilient because of the beneficial connections between each plant, insect and organism that flourishes there. To thrive in a hard time we need to know ourselves as that chalk land meadow; we need to be that coral reef, we need to be that primary forest and the mycorrhizal fungi on the leafy floor. We enter the system by paying close attention to our home country, to the small places, at the edges of things, in the spaces where there are no agendas, in the question and the pause, your laugh out of the blue on a halcyon day.