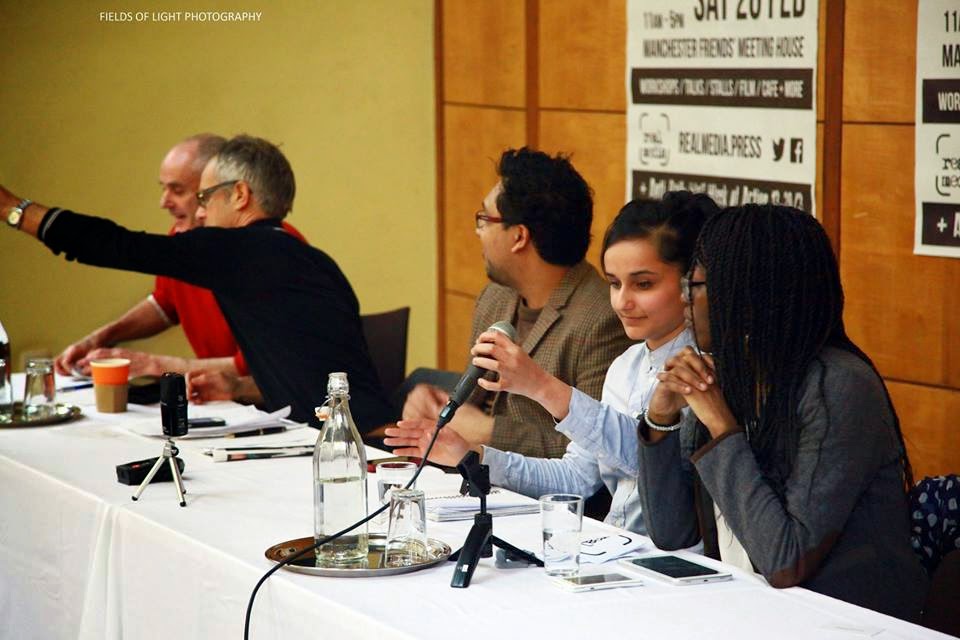 At the end of last month I went to the Real Media Gathering in Man- chester to meet up with fellow forgers of UK's grassroots media. Here are some reflections on the event, as Real Media's first campaign kicks off this week. Originally published by the innovative Independence blog, Bella Caledonia, this is the slightly longer version of the story.

‘It’s tragic,’ said the traveller, staring at the teaser on the front page. The news was all over Euston Station. A huge screen by departures was proclaiming the end of the world as we know it:


‘He was 83,’ I responded as we stood by the newspaper rack at WH Smiths.
‘I was shocked,’ he said. ‘I thought he was going to go on forever.'
‘No one is immortal on this planet!’ I laughed, and went to board the 0800 to Manchester Piccadilly. I was heading towards a convergence of journalists responding to the call for a ‘Real Media’: to cover what is happening on rather more grounded territory - Britain in 2015 in the run up to The Election.


Real Media describes itself as a ‘series of events and actions to campaign against media distortion and for independent grassroots journalism’. It has been set up by RealFare, a project that aims to challenge myths about the welfare system and this gathering is its kick-off point.  In a similar way that UKUncut brought  corporate tax dodging to public awareness and the Occupy movement the corrupt banking system, Real Media wants to expose the hyperreal, hostile nature of the press that distorts rather than reports on the reality we live in.


Aside from this gathering there are two actions this month: a national Anti Daily Mail Week from 13-20th March with online blockades, subvertising, protest and parody, followed by Occupy Rupert Murdoch Week from 22nd-29th March, organised by Occupy The Media. The week will include art and action and is being brought right to Murdoch’s door: his News UK headquarters in London Bridge. A full website will be launched in April.


The gathering taking place at the Friends Meeting House is framed by an opening and closing plenary, with workshops, films and discussions throughout the day. Networking is at full tilt, as I arrive with a bundle of the final issue of Transition Free Press under my arm.


As the speakers open the discussion it becomes clear there are there are two big challenges ahead: one is to call ‘Big Media’ to account, to make the reading/watching public aware that their news is highly manipulated in favour of the five billionaires who own 80% of its production.


The second is to build an alternatively-structured, collaborative media that will include the voices of people who are blocked and left out of the debate. If UK news coverage is ‘shallow and corrosive’ as described by radical US journalist, Glenn Greenwald, our task is to deepen and broaden it, to make our media both people and planet-friendly.


It is a producer problem for sure - subjects such as climate change, social justice movements, the fate of the unemployed or asylum seekers, are commonly bypassed or misrepresented. But it is also a consumer problem. We are addicted to processed news.


Like junk food, we know junk media is not good for us, yet find ourselves lured into the ghost trains and freak shows that beckon us at every newsstand or website sidebar. Flick me, click me, now! How can we kick the habit and instead feed our minds and hearts with empathic stories and intelligent debate? How can we see the Earth, not as a battleground, but as a common ground for human beings and millions of other species coexisting, all with limited lifespans?

The media, like all British instit- utions, thrives on humiliation. And the prime way to avoid humiliation is to humiliate someone else you consider lesser than you. What would a new media look like that doesn’t tap into the fury that lies beneath an institutionalised powerlessness? That recognises that the pecked chicken in the corner is not the problem, but that we all are cooped up in a  henhouse, and this is not how we are supposed to live? 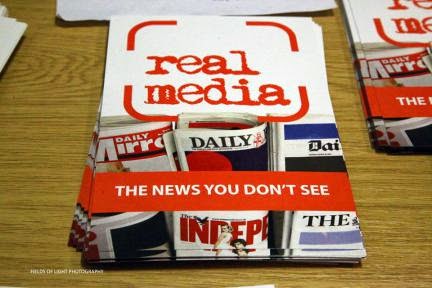 What would a media look like that is not owned by oligarchs, where editors are no longer ‘content managers’ or  papers ‘products’ and a dead actor with alien ears the headline of the day?


In the hallway and networking rooms of the Friends Meeting House the signs of it are in the air and on the table: new cooperatively-run, people-owned  local papers such as Birmingham’s Slaney Street or The Bristol Cable. The strong intelligent editorial of The Occupied Times, that first went on sale outside St Paul’s in 2011, with its distinctive black and white style. International on-line and print magazines that operate without advertising, such as the New Internationalist. Publications that train people to become citizen journalists like Manchester Mule, or STIR magazine based in Dorset; crowdfunded journalism such as ex-Guardian political commentator, Nafeez Ahmed’s Patreon platform. Independent writers, editors, broadcasters, new wave techs and a few Fleet Street vets, like myself, all happy to share their knowledge and skills and experience.


Which brings a third challenge into play: finding ways to cohere our different outlets into a meaningful and stable network. In a media monoculture news is easy to co-ordinate. McMedia can be sold anywhere. It looks and tastes the same: the same press releases and think-tank reports, the same agency photographs, the same levels of antagonism in columns and headlines, just reworked into different house styles.


However a diverse, cross-cultural media doesn’t look or feel like this. It might be grainy instead of glossy, but its headlines don’t scream at you or twist your guts. In conventional media, the reader is irrelevant, except as a consumer, mostly of the advertising which keeps its papers, websites and channels financially afloat. In Real Media however the reader is a key part of the communications system: they are the story that is being written and, in many cases, they also fund the paper or platform they are reading or listening to.


The only free press, as OpenDemocracy states, is one paid for by its readers.

No media outlet is cheap to run. In-depth investigative reporting is expensive not least for the legal fees it can incur. Most people are unaware of how much journalism costs to produce both in terms of effort and finance, and give it a poor level of value or trust.


Conventional journalists however don’t have to think about where their salaries or readership come from. Unless they bump hard against the system, as the Telegraph’s Peter Oborne did recently regarding HBSC, reporters rarely consider the pernicious influence of advertising on editorial, or the dissonance that arises, for example, when companies like Unilever sponsor environmental pages in The Guardian.


In alternative media you have to think about these relationships: you become an entrepreneur as much as a reporter. You have to juggle the demands of sourcing ethical advertising, subscription schemes, crowdfunding and funding from progressive charities, such as Network for Social Change. None of these are secure outlets. Most ‘alternative journalism’ doesn’t pay either its contributors, or its editorial staff.


So the way forward for many publications, both on-line or in print is through donations: to build a dynamic economic relationship with their readers, which is how the new media platform, Common Space, launched through Common Wheal, has been able to fund its team of reporters. In England, we are highly aware that the Independence movement has radicalised a large section of society that had never had been involved in political discussion before. It has helped to redefine democracy as a people-led movement, rather than a battle for power and privilege in the corridors of Westminster. - and Common Space can be seen as a direct reflection of that engagement.


But how can a left-leaning press alliance get this kind of new thinking out to people who may lean in other directions? ‘We don’t want to be in an echo-chamber, talking to ourselves,’ Common Space’s editor Angela Haggerty stated.


Answering questions from the floor about dealing with disenfranchisement among fracking protesters, or within Muslim communities, she advised: ‘You have to confront the argument and be prepared to explore it properly.’ Most of all you have to listen and allow enough space and common ground for everyone to be included.


This is a very different position from conventional journalism which stands apart from the subject it is reporting on. It is a stance that demands far more than an ability to ask awkward questions and make the deadline. To stop sliding into the Us and Them rhetoric that typifies Big Media, we need to ask ourselves those kinds of tricky existential questions that have been arising in the backrooms of the Friends’ Meeting House on this rainy afternoon.


Who are you reporting to, and for whom?


Whose side are you on?

Everybody knows the boat is leaking

Everybody knows , as Leonard Cohen once reminded us, but few of us speak with one another as if we all know. Everyone knows the system is rotten but carries on reading papers that say that the shiny world they showcase is going to last forever. One of the reasons for the Big Media clampdown on dissent, explains Ahmed, is because of the systemic crisis we are facing – political, financial, environmental, social – is signalling that the system itself is dying.


‘Fundamentally our planet is owned and controlled by a tiny elite of people who are exploiting the commons for their own benefit.’


If everybody knows that fracking contaminates water tables, that Amazon doesn’t pay its taxes, that ‘divide and rule’ is the tactic employed by all bully-boy Empires, a key move we need to make as citizens and communicators is to speak to each other from that knowledge, and frame our media likewise.


One thing lies in our favour: what drives every journalist, no matter who  they work for, is neither money, nor corporate control; it is the story. And if that story is no longer illusion or propaganda, but  embedded in the real lives of people, reporters will have no choice but to go out there and find it.


Everybody knows the captain lied.


That story is us. Time to start writing it.

Find out more details at the Real Media website. Occupy the Media website can be found here, with details of events and the Charter For a Free Democratic Press.