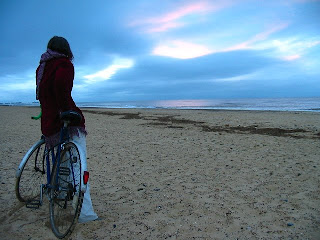 4.38am sunrise on the sunrise coast, East Anglia. The sky is banked up with cloud yet the light has a presence that is palpable. It emanates over dawn-coloured water, pulsing on the horizon. We stand at the tide-line and sense its unmistakable appearance. All over England today people have climbed hills and beacons and tors, lit fires through the night and waited for this moment. We can’t see the sun but we know it’s there. Not because we have clocks but because we can feel it with our bodies. 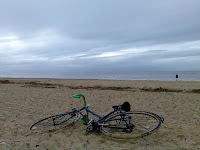 It’s a short journey to the sea from my house, about 2 miles, and the most frequent journey I make on my bike. When you’re cutting carbon, this is the kind of journey that represents a typical Transition decision: two wheels or four? It’s so easy to take the car and not to cycle or walk into town (30 minutes). But of course every time you do, you encounter the life of the neighbourhood and the earth all around you: sounds, scents, colour, people, creatures, insects, trees. Every time you experience your own vigour: the life force that lives coiled up in your cells, that hums through your blood, your breath, the strength of your form, your sense of balance. Reconnect with the fire that burns within, that infinite light. Everything in fact that makes you want to be alive, to know the world immediately, directly. 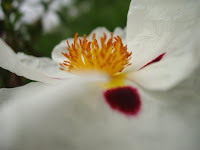 This morning we had the whole world (and the roads) to ourselves: the scent of elderflowers and wild rose in the lane, mock orange as we sped by the sleeping houses, fennel in the dunes, the purple opium poppies in the allotments, red sorrel on the Common, wrens singing in gardens, larks over the marshes, the slow roar of the invisible sea before the dunes, and then the hugeness of sea and sky

It’s a fast moment, the moment of summer solstice but suddenly it’s as if the year opens out and everything expands towards an infinite horizon. You think it’s going to dip down like one of those peak oil/finanacial downturn graphs, but it doesn’t. It broadens out. It’s no longer the young dappled summer of the woods and green meadows. It’s the high golden summer of the seashore and the waterlands. Soon I’ll be making this journey with my thermos and swimming towel. Three months of cycling down and watching the sun come up over the horizon. And everywhere people half naked and happily immersed in the physical elements of sun, sea and sand. The summer of summer holidays.

I got a blue bike for my birthday when I was eight years old. And I loved it in the manner of all children, because it meant independence and freedom. I was an acrobatic child, climbed trees and scaffolding and rooftops, somersaulted over gates, jumped stairs and spent hours inventing balletic bicycle routines in the street where I lived in the city. Something of that physical ease and happiness I kept with me all my life and even now I like the reckless feeling of going downhill, or swerving corners, one finger on the handlebar. And all bikes I’ve owned have been blue ever since.

Last week I went to see Barry to get my brakes fixed. I had been using an innovative stopping technique with my feet and was wearing out my shoes. I was thinking about getting another bike. Barry showed me a vintage Raleigh that had just come in. It was beautifully made and in pristine condition - stainless steel wheels, dark forest green with a basket and a bell. A classic shape, but rather slow looking. He mentioned a price. It was a bargain. I hesitated.

“Not exactly a BMW,” I said (Barry once sold us his very beautiful scarlet and chrome E reg in the days before we discovered peak oil).
“A Rolls Royce,” he pronounced.

It was a lovely machine, but when I tried it out down the sandy track by the garage something heavy and depressing came over me. It seemed to take an age to turn a corner. And then I realised: it was an old lady’s bike. I had visions of bowling sedately along the seafront with long skirts and cardigan, and I shuddered. And even though it was my 54th birthday yesterday I couldn’t quite do that sit-up-and-beg thing.

“I’m just a drop handlebar kind of girl,” I told him.
“Head down, bum in the air,” he said.
“Something like that,” I laughed. And sprang happily back on my second hand 5-speed Sun bike, terminally rusty from an encounter with the sea waves. Without a helmet, without a care. 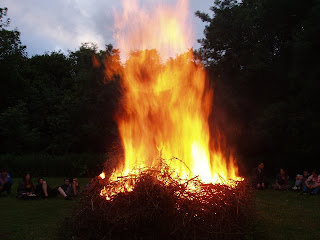