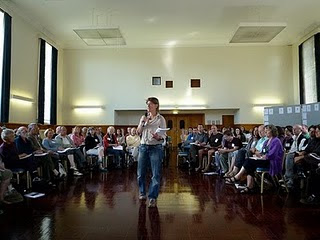 On the red wall in the old students’ union there were sign-up lists for all the workshops – Zero Carbon Farm, Tales for Transition, Community Ownership of Assets, Wild Zones. DIY streets... One at the end was covered in signatures. The title was Making Sense of the Financial Crisis in the Era of Peak Oil.

Nicole Foss writes under the name Stoneleigh on the influential blog, The Automatic Earth. Unlike most disciplines which only look at their subject on its own terms, Stoneleigh looks at the Big Picture, and the the Big Picture in 2010 from the financial and resource perspective is looking none too good. In fact it became obvious through this intense one and a half hour lecture that we are facing a meltdown, within which the financial collapse (already set in motion in 2008) is the defining event. This is because finanical markets move far more quickly than resource markets. They change in the speed of an email or a phone call. Fear spreads like contagion and positive feedback is the rule. 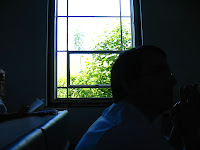 The graphs came and went. The patterns of deflation were spelled out. Bubbles burst through the centuries, pyramids collapsed. With fossil fuels the bubble has expanded like never before in history. 1600 trillion dollars of virtual money in 30 years. For every slice of financial cake that exists there are now one hundred claims. Because these expansions are built, as Stoneleigh pointed out, not on the reality of wealth, but on a perception of money. At some point the spell breaks. We are running off a cliff and our legs are still working, but very soon we’re going to look down and realise there is nothing to hold us up. We fall bigtime.

We looked at the screen: credit disppearing, affordability descreasing, house prices going down, prices for essentials going up. People hoarding and the lack of lubricant money halting the interactive flow of goods and services. What do we need to do now? Stoneleigh advises us: look at your structural dependency, deal with debt, and make relationships you can trust. In effect, be part of Transition. 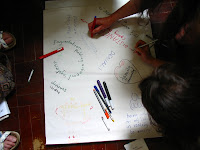 The lecture hall was packed and everyone sat in a stunned kind of silence. Afterwards we reeled out to a second leg of Open Space and after lunch the next day entered a Big Group Process in the Great Hall. It was a new Transition experiment. We gathered into our “home groups” (groups of eight people formed at the Mapping of the initiatives at the start of the conference) and looked collectively into the future. We explored what we felt would happen in one year’s time, then five, then ten. We closed our eyes and put ourselves in a frame to see what would lie ahead, as Sophy asked questions. What does it mean we are so much in debt? What are our feelings about what is coming? Then we discussed the matter between ourselves and drew our thoughts in images and words. At the end we held up our sheets of paper in a living gallery. 2011, 2015, 2020. Everywhere there was a split between breakdown and breakthrough, fall and transcendence. In amongst the dark scribbling emerged butterflies and the phoenix. Through the dualities of hope and despair, the good ship Transition sailed on towards the future.

The Stoneleigh effect rippled through the weekend. It was the most talked about event. Not because most of us are unaware that things were going to change radically, but because the reality of the figures made the reality of what we might experience come home to everyone in the room. 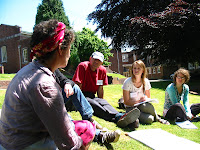 Transition is well known for its positive outlook, for the fact it sees an opportunity for living very differently on the planet as fossil fuels become scarce and costly. It deliberately steers a different course of activism from environmental or social protest against the old powers; it does not encourage endtimes glee, the mind's arrogant dismissal of life. It works very hard to make new connections between human beings, to forge resilient communities, to enter the field of possibilities rather than follow a trajectory that we have been trained to see is the only way. But the fact is none of this can happen without the old structures that hold that trajectory in place breaking up.

You don’t get to the butterfly without the caterpillar dissolving. And that dissolve is what we were looking at in the Stoneleigh graphs as they dipped. It was the pattern of collapse of a civilisation.

Resilience, the key concept of Transition, is the ability to weather shock, to adapt and still thrive. This is the kind of unexpected shock we will have to weather, as Sophy explained later. The lecture was a last minute addition to the programme and interrupted the Open Space sessons; it sent people reeling and some to sit for hours in circles talking about their experiences. It influenced the way we thought, what was discussed around the tables, under trees, at the bar. But in many ways it was a relief, we didn’t have to be Pollyannas anymore. It was OK to talk about the difficulties we will face. Because it was clear we were all going to face them. That made a difference. Because instead of being alone, we will be together.

That evening I went swimming with Adrienne. There were five of us and we met up in the canteen in the self-organising style of the conference. The river Dart runs through a wooded valley, free flowing, tan-coloured with dark mossy rocks on either side. We went down a track through the trees and jumped naked into the cold wild water and swam together upsteam, and then floated back with the current. The sun spiralled through the green leaves and I remembered a long, long time ago a moment in Australia: a boy had fallen into the rainforest pool from the cliff and I was beside him waiting for the shock to subside and a turtle swam by and I heard the wind blow through the gum trees and looked up and saw a group of men, women and children standing naked in the water, in complete syncronicity with everything around them and there was a peace and a silence between us that seemed to stretch to infinity and I realised I was looking at the future.

Because who knows what happens when we take off our clothes, divest ourselves of our caterpillar lives, what butterflies we might become? Who could predict that I would have met Adrienne again after 25 years and that we had so many deep and shared experiences to talk about in a way that we could never have known in our careless city youth? What underlying pattern brought us together, connected the totem bird of the Conference, a fledging jackdaw with the fledging jackdaws I wrote about in the blog before I came? What patterns of strength do we find within us when the shock subsides, what depth of feeling, what intelligence and skill arises when other possibilites lie ahead?

What wings do we discover when we look down and see there is only space beneath us? 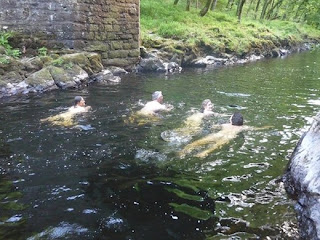