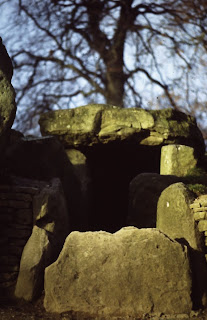 Solstice is a door you go through. Perhaps the greatest door of the year. Thirty years ago, when I was 23 I walked out of the door and left Christmas behind – all its sentimentality and gift-wrapped pressures, the small violence of drawing rooms. I left turkey and television and fled into the mountains with my friends. There we drank vino caldo and flew down the slopes and felt free. It was as if a spell had broken and I was suddenly released from the grip of December and could roam the world. I went skiing in Kashmir, swam in the Caribbean ocean, discovered Venice and New York, and finally I went travelling as a way of life in lands where tinsel time never came. But I also left Winter behind, and everything that meant in terms of time and a place on earth. I lived in a perpetual and artificial summer. And one day I knew I had to come back and find a place to live. I went to Newgrange in Ireland, now the most famous Neolithic burial mound in the world. Once it commanded the hill and the wind sang through its abandoned chambers. Now it is a world heritage site, its stony face tidied up and fenced off. You have to take a shuttle bus with a tour guide who tells you what once happened here, as you stare obligingly at the three rocks that command the entrance with their mysterious spirals like giant snakes. The guide does not know what they mean. In spite of all this control the mound is an awesome space inside. As we sat in the dark our guide clicked on a torch and talked about the different kinds of mark-stones. On one there was etched a sheaf of corn. No one knows what that means either, she said and fell silent. And then she turned off the light. We looked through the Winter Solstice door. It was quite small inside the mound, and you could sense people in the dark, strangers pressed together close, like animals, and in this silence I felt something unexpected: I felt suddenly how it was when the people came together and waited for the moment when the door of the great year swung open, when the sun came back to the earth and the darkness of Newgrange became full of sunlight, and your heart burst open with excitement. In the days when everyone lived according to the time of the sun and earth. When I came back I wanted to discover what those snakes meant and those doors of time. And I walked for miles across the land, recovering myself as a dweller of these misty islands, as someone whose heart could leap at the sight of the sun rising. I wanted to belong, not to society, not to culture. but to a land shaped by ancestral forces. I wanted to become native, so that no one could tell me I did not belong to the earth or to life. 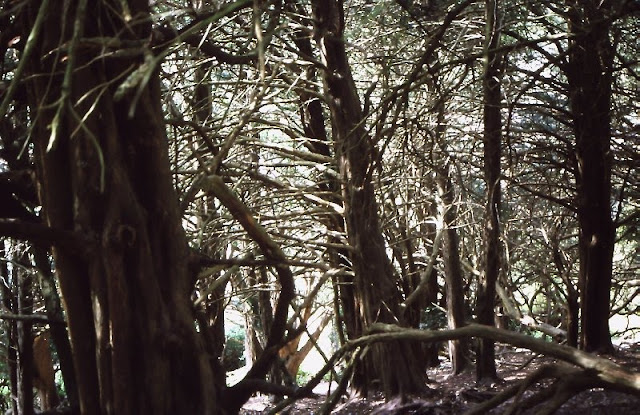 The stone door in the first picture is at Wayland’s Smithy, an ancient burial mound on a hill in Oxfordshire where I began my quest. These hills in central England are crowned with circles of beech trees with small tracks leading to them that have been walked for thousands of years. Carved into the hillside is a mysterious figure some call the White Horse and others the white dragon, indicating that this hill, like many mountains of the world, is where the treasures of the earth are kept. Wayland was the lame smith of the Saxon gods who wrought their fine jewellery but the burial mound on this hill goes back way before he kept his elven forge here. It contains the bones of certain people buried at a certain time who wrought another kind of treasure entirely. This burial mound comes before everything we know. It comes before the temples, pyramids, the cities and the libraries, before the gods and before the invaders of this island. I lay above my ancestors on this mound like a grassy whale in the centre of England and for the first time in my life felt entirely at home.

I delved into libraries and I sat under trees. I lit fires and marked the calendar of the year. I discovered that at the solstices an ancient struggle is enacted between the oak kings: the deciduous oak, the ascending sun, and the holm or evergreen oak (here the holly) who rules the dark half of the waning year. At the apexes of solar year, the light and the dark battle with one another, and one cedes rulership to the other. It's a mythology we know in fragments, in snatches of song, ritual, carol and rhyme, Who killed cock robin? (the bird of the oak). It was I with my little eye, said Jenny Wren (bird of the holm). I found that these mythologies are like a code that points us to where the real treasure of life is kept. Red berry, red breast, red blood. Solar fire. The mythic language resonates within you in a deep place, in deep time - a language of stone and star, a track of geese flying across a liquid sky. Bone knowledge, heart knowledge. At the solstice you tap into that bone knowledge of yourself, the part that remembers everything about your homeland, as you wait scanning the horizon, across an empty field, on top of the hill. You know that no matter what fairy stories you have been told, gospels according to Luke or Darwin or Sigmund Freud, your human parents do not give you the spark of life - the breath in your lungs, the food in your mouth, the wood that stokes the fire, the rhythm that beats in your heart. And that the primary relationship lies not within the institution of family, but within the creative matrix of the earth and sun. If, as Jeremy Rifkin suggests we are moving beyond psychological consciousness towards the realm of bio-spheric, where we are empathic with all living things, it is this relationship, released from our bonds of tribal obligation, where our attention now needs to go. In modern life it is hard to pay attention to the big things that matter, so prevented and distracted are we from the wild and the deep, the elemental, the ancestral, the true allegiance of our hearts. Yet waking this morning it is everywhere I look. Snowlight filling the house. A fresh breeze across the land. In the gaps of the clouds a full moon in eclipse and Venus shining, and to the East an invisible sun starting its ascent. A planetary moment under a great oak. A new day. Happy solstice everyone! 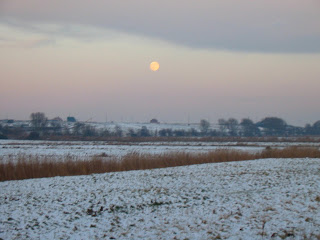 From topic week on Midwinter