Riches-to-Rags - Our Fashionable Stories of Stuff 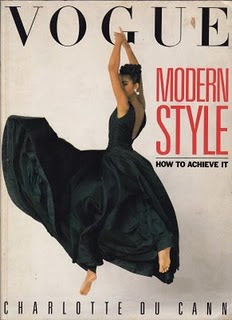 I confess. I was once a fashionista. I worked for Vogue and Harpers and Queen and Elle, I observed catwalks, I styled shoots and interviewed designers in swanky restaurants – Jasper and Issey and John – and when the Japanese were In wouldn’t have been see dead in the capital cities of the world without a black turban and black lipstick. No one saw my hair for a year.

“You’re wearing your coat inside out,” said my friend Alexander in Rome. "I can see the hook”.
"It’s a fashion detail," I said. "It means this jacket is by Jean Paul Gaultier."

It was the most expensive beautiful thing I owned, a moody tangerine cotton frock coat with gold buttons (well this was the 80s!). Alexander, who was studying for the priesthood, laughed. He didn’t know anything about Jean Paul Gaultier. But he knew the work of a clever devil when he saw one.

Sometimes l think about the clothes I used to own and it shocks me that I remember my wardrobe more intimately, more joyfully than I remember my friends of that time. The question I ask myself now is: is this because we were damned, fallen angels trapped in the colourful lures of the material world, or is it because our relationship with matter, with the fabric of the earth, has never been truly celebrated or understood? Or is it that our letting go of Stuff, our powerdown, has become the most urgent and most interesting story of our times? 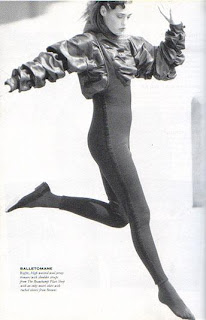 When I joined Transition Norwich the very first conversation I had was about fashion. It was with Helen. We were sitting at the Arts, Culture and Well Being table at the Unleashing, discussing the lecture on Peak Oil by Ben Brangwyn, and she asked me:

“What are we going to do about last’s year trousers?”
“We’re going to have to wear them and not worry about them,” I replied.
The truth was I had given up worrying about this year’s Look a long time ago, when I had chucked my job as a fashion editor and gone travelling in search of Life without a Hemline instead.

I now wore thrift store clothes and darned my own socks. My coat was worn. I hadn’t visited a dry cleaner for a decade. It was a different time. In 1998 I had tried on a hand-knit in Gap and felt the sweat-shop labour of children and had shuddered. Conscience and the consequences of the fashion business had pricked my consumer bubble.
This week we’re going to be writing about that wake up call that millions of us are experiencing as we connect with the planet, with our fellow human beings, and the decisions we are making to turn our materialistic world around. What it takes on the inside to shift that fierce possessive love of things to loving the earth and its peoples in relationship. As the Spring collections are starting up in Paris, Milan, New York and London and Norwich (once the weaving capital of Britain) is having its first fashion week the Low Carbon Life crew are going to look at clothes in Transition, waking up to the facts behind the textile industry, celebrating charity shop style, making our own hats, mending our shoes, our own stories of stuff. 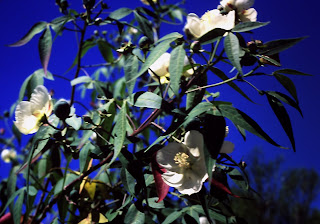 The picture is a photograph of a wild cotton plant in Arizona, one of the most lovely bushes in the world. Because our consumer story, like the story of Sleeping Beauty, starts with a needle and cotton. With the very first industrial machine, designed in the North of England in 1764, the Spinning Jenny. If you follow the thread you find out who is in charge of the wheel . . .
Photos: cover and inside picture of last century's trousers from Vogue's Modern Style; desert cotton flowers by CDC.
Posted by Charlotte Du Cann at 14:22