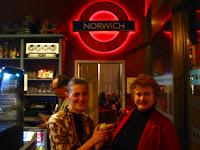 It came out of the blue the day following the Transition Norwich First Anniversary Party in 2009. The same week we launched this blog, This Low Carbon Life.

Would you like to join the OneWorldColumn? The invitation was from Rupert Read who had founded this weekly “alternative” column on the EDP six years ago at the height of the Iraq War. We’d like you to write about Transition and food, he said. So there it was after 20 years, an invitation to join a shared column with five other writers on subjects ranging from globalisation, peacemaking and human rights to international relations and the environment.

I joined with a happy heart, thrilled to be getting the Transition movement expressed into the open. I wrote about peak oil and climate change, what is was like to join the Wave and the Norfolk Coalition Against the Cuts demonstration, about the Big Society and how John Gummer MP had told a woman at an Energy Fair in Suffolk that wearing a woolly hat was a Very Good Thing (whilst keeping five cars in his garage). I wrote about the oil that Chevron had allowed to seep into Ecuadorian rain forest, how 50 billion farm animals are slaughtered each year in the industrial food system. I reviewed Avatar and Food, Inc. and wrote about things that deeply affected me on a global and planetary level and what Transition was doing at a local level to configure the world that had got so out of balance: seedling swaps and community gardens, Transition Circles, Bungay Community Bees, all our decisions to use less energy, eat differently, come together in small bands and work to build a low-carbon culture.

Each week the six of us would send each other our column and peer review what we had written, I read Lee Marsden on right-wing religion, Rupert Read on future people, Trevor Phillips on unions, Marguerite Finn on nuclear power, David Seddon on South Africa, Mark Crutchley on sharks and the perilous state of the ocean. We made suggestions and gave feedback and the column brought a rhythm and communication to the week. Unlike this blog it was hard to write those 642 words, because when you write for conventional media, you’re writing against invisible forces that don’t necessarily like what you are saying, with an eye on the news desk, knowing that anytime those paras can be cut (which sometimes they were). What made it work was we were not on our own.

Then last August equally out of the blue the EDP told us we would not be needed any more. It was "time to ring the changes". 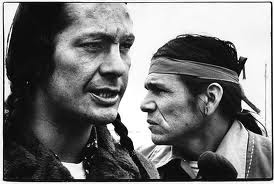 But that was not the end of the column. We decided to keep writing on the blog where six years worth of writing from 12 writers had been archived. And we were going to continue. Instead of falling apart we came together and pooled our resources. We began to meet at the Alexandra pub and talk about ways we could expand ourselves and "make the OneWorldColumn blog a focal point for all the activities that were taking place in the region; to start a conversation that would not only bring the organisations and disciplines we represented together (Green Party, Greenpeace, the peace movement, Transition movement, Campaign against Climate Change, international development), but to unify all the different strands within the local progressive community", We are academics and politicians, philosophers, activists and campaigners, the subjects we write about are equally diverse, yet what struck me when we met is how we speak the same language. It’s as if we’ve known each other forever.

Last week we gave a party to launch our blog at the EPIC Media centre on Magdalen Street. We were throwing open an invitation to all progressive organisations in the Eastern Region. Last of the six to speak I stood up and told a story about working for newspapers. It was in 1990 when I was working on The Independent as a fashion editor and Mark was singing with his band, The Love Fund, at a gathering in Milton Keynes called the Sacred Run. A band of Native American warriors were running from America to Russia to deliver a message of peace. I persuaded the news desk it was a good story and went to interview their leader, the activist Dennis Banks:

“I run to remind the world that the eagle is still the eagle and the owl is still the owl," he told me.
"Does the world want to know?” I asked.
He looked at me, cocky little journalist, French designer jacket, Japanese tape recorder in my hand.
"It’s doesn’t matter who gets the message. What matters is that the message is delivered."
"Well," I replied (rather pleased with myself) "Thousands of people will read this tomorrow."

But the fact was they didn’t. Because the story was never published (the photographer didn’t get a good shot). I left the paper to travel to America and didn’t appear in newspaper print for another 20 years. A year after the runners returned communist Russia fell.

At some point all our empires end. The ones we think will go on forever inside us, the huge corporate machine that strides the present earth. This blog, the OneWorldColumn blog, seem small things in the face of such powers. Our task in Transition seems immense. But if what we are saying is the Right Thing, if we are saying what we feel in our hearts, if we are People in the same way the eagle is the Eagle, and the owl is the Owl, then it matters that we keep delivering that message. The invisible forces are strong because they don’t want people to say what they really feel, what we know in the core of ourselves to be true about the earth, about social justice, about freedom.

The empires may control and close down the official communication channels, but this new media will keep finding new ones. It’s easy to be persuaded that unless thousands of people are reading you and you are backed by powerful newspaper magnates and surrounded by the glitz and glamour of the world, what you say is irrelevant. But it isn’t. That's the beauty of modern social networking. It’s run and written by people who know that when you are a messenger that’s what really matters. Because when you’re in communication you are not alone. TheOneWordColumn is written by six people, This Low Carbon Life is a community blog, The Transition Norwich news that comes out today is the work of fifteen different contributors. We’re not on our own anymore. We’re in convergence.
Photo: With Jacky Howe at the OWC party at the EPIC centre, Magdalen Street; Dennis Banks and Russell Means at Wounded Knee; Avatar poster
Posted by Charlotte Du Cann at 09:13