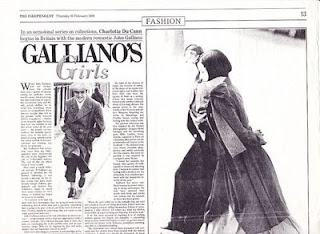 "You play the cello, don't you?" boomed the editor. "Yes," I said. "Well, I played in the orchestra at school" "Oh, good," she said. "Then you can interview Segovia tomorrow".

I had a feeling I was addressed as Du Cann in the corridor that day, but maybe that's not what she actually said. Whatever, being commanded to interview the legendary guitarist on the basis of having strings-in-common was utterly petrifying. I had never done an interview in my life before. I was 22, cocky, but not that cocky.

"What shall I do?" I asked my fellow cub reporter, Rachel, who was busy writing captions about raspberry chiffon. "Buy a tape recorder," she advised.

I'm not sure that would happen now. In those days you got a job at places like Vogue with no experience and were thrown into the deep end. If you couldn't swim with style, you didn't pass the ordeal. I didn't interview Segovia in the end, but I did interview Simon Callow, just before he played in Amadeus at the National Theatre, in equally nerve-wracking circumstances. I don't know who was more shaky, him or me, as we sat in Snowdon's studio while the maestro photographer fumbled about with the camera. He took three hours to take one shot.

I learned my first lesson about interviewing that day. Which is this: while it may look as though nothing is going on and you are not in control, in fact you are clocking everything. Control is not what it's about. You are waiting for the shot or the quote, the aha moment that will turn the ship around. Sometimes you have to wait a long time to get that quote, usually after about thirty minutes fumbling around in the dark.

This week on the project is all about interviewing people. It was set up as a week by Adrienne Campbell, who couldn't do the assignment because she had to go into hospital (now thankfully out and in recovery). Her original - typically adventurous - idea was to interview someone difficult, even in opposition to Transition, and take them on in a dialogue, stand in their shoes and find out how they tick. I'm taking up the helm and introducing the week, but I haven't interviewed anyone specifically (my fellow reporters will be doing that from tomorrow). What I wanted to do was explore why we originally discussed the idea and what this standard media technique does, and how it could apply to Transition. 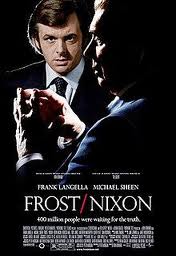 A writer always sells someone out, the great observer Joan Didion once wrote. That was the second lesson I learned, when I got to type up my first interview in the features dept. The heady feeling of having material and being able to fashion a story you want to tell around it. In magazine journalism the story is everything, and the writer of the interview is as key as the subject. This also held true, at that time, for television. The interview can be an investigation, a confrontation, or a dialogue in which both people can come to different conclusions about themselves and life at the end of an hour. It's a useful tool because most people enjoy the attention and will invaribly spill the beans at some point. The interviewer looks like a mouse, but is in fact a weasel, mesmerising its prey.

So I spent a decade thereafter with a tape recorder in my pocket, interviewing artists, writers, singers, fashion designers, furniture designers, chefs, craftsmen. I wasn't interested in catching people out, or unearthing scandal, but I did want to know how people made things happen. I was endlessly fascinated by form and creativity. I hung around backstage, on film sets, in studios, in bars and swanky restaurants (not great for interviews - all that clinking of glasses). I thought nothing of getting on a plane to interview people about their house in Tuscany or their latest book in Albany.

Sometimes I got the quote easily, and sometimes I had to sweat a lot for it to happen. I was nervous, even when I'd become good at it, because it's a nerve wracking business. You have to think on your feet. Some people prepare a lot beforehand, but I waded in with one or two questions up my sleeve and improvised. It's a risky style but you can push the edge that way. People let their guard down and come up with surprises. Sitting in front of the filmmaker Wim Wenders and the designer, Yojhi Yamamoto in Paris, a great silence ensued that I thought would never end. I was about to break it, when the Japanese master of the understatement turned to me and said:

Black is the colour of hysteria.

Once you've got the quote, you have the story.

Sure thing, you might say, but what has any of this old stuff got to do with Transition? Because the interview is a great tool and a key tool if we want to become our own media. People flourish with proper attention. Anyone's story is interesting, if you can find a way to open them up, ask questions, go back in time, listen, allow. In ordinary life we don't do this. We go to meetings. We see people every day in a superficial way, we don't pay each other notice, in terms of ourselves as beings-in-Transition, in terms of sharing a storehouse of knowledge, or skills. We're too busy to give that kind of time, and maybe not generous enough to find out what our fellow transitioners actually think or feel. That meeting with a tape recorder can give an objective frame, in which everyone can go deep and far, carve out an hour when the demands of ordinary life can be put on hold. When the best of ourselves can come out.

In Transition of course we don't want to sell anyone down river, especially since we are all in the same canoe. So the interview has to change its form in many ways. When I interviewed Rob Hopkins on his whistlestop visit to Norwich last November, squeezed between breakfast and a vist to Grapes Hill Community Garden, it was more of a conversation around the role of communication and social enterprise. We are not adversaries, sitting opposite each other, we are in the same business, sitting side by side, so the interview is more of way to reflect and connect, rather than a relevation.

Interviewing Shaun Chamberlin last month for the Transition Free Press over Skype, we had a great discussion and covered a lot of intellectual ground, which was the main point of the interview. But you can't be intimate through a machine. Had we wanted to talk at a more emotional level, it would have been tough going. You need the presence of people in the room. You need those awkward silences, the sense that someone is listening.

Since the creation of the Internet many interviews no longer happen in situ, but in the format of an (emailed) question and answer session. These don't require any skill (or daring) from the journalist, apart from formulating the questions. There is no encounter and no shaping of a story. As a result the material is far more limited and you tend to get stock answers. Some of this is due to a decline in journalism, the effect of a market culture on a creative form. Some of it due to the subsequent lack of expenses that don't allow writers to visit or spend months of their time around people, as Didion or Tom Wolfe or other "new" journalists once did in the 70s and 80s, in order to research a story.

When the Social Reporting Project was set up last year, I wanted to pass on some of the skills I learned in those glossy magazine Fleet Street years, when journalism was not just about press releases and getting stories "off the wire". Ed and I ran two workshops, one at the Sunrise Festival and another at the Transition Conference. In one exercise we asked everyone to split into pairs and interview one another for five minutes about a Transition project, then feedback to the group. These events are a whirl of constant conversation: most of them disappear afterwards. But I can still remember talking about our (Sustainable) Bungay Beehive Day and hearing about the Brixton Remakery starting up, how Rebecca from Transition Crouch End organised a community processon along an underground river to celebrate Guy Fawkes and Halloween. Something sticks when you make this structure in space and time. 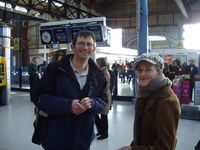 So although none of us are working for the mainstream press, we work alongside each other all the time. We can all of us take time and ask questions, talk to each other as if we matter. Not in terms of "I want something from you" (the manager), or "You have a problem I am going to sort out" (the therapist), but as social reporters who are in search of a new narrative. Because if I don't know you and you don't know me a certain pattern will prevail in the world - one that none of us in our hearts want to see through to its logical end. We need to speak outloud and listen in our Transition communications as beings of the future, who possess certain experiences and skills that can change that pattern. We can't do this on our own.

Interview with John Galliano, The Independent, 1990; poster for the docudrama, Frost/Nixon; interviewing Ed at the Transition Conference (Mike Grenville); with Rob Hopkins at Norwich station
Posted by Charlotte Du Cann at 17:56