Little Boxes on the Hillside 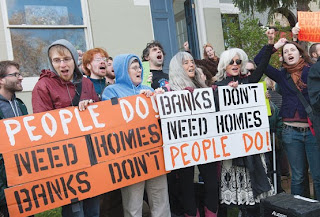 Last night we drove through the new ticky-tacky estates in Stowmarket on the way to What if . . .the sea keeps rising. This being England these 3000 houses are not coloured blue, green, red and yellow. They are a kind of uniform pinky brown and crushed up against each other, as if there is no room to breathe or stretch a limb. And in spite of the architectural differences of size and shape, they all look just the same. We groaned a collective groan and said we couldn't imagine living there, and this being England, were glad when we entered the historic streets of the old market town.

John suggested on Monday there might be positive sides to development, and if you are talking about building houses that have efficient heating systems and promoting cycle paths, you could force yourself to look on the bright side. But that would be to skip what you felt about them in the first place. No developments evince joy in people. No one celebrates when green fields are torn up, trees are felled, creatures are driven out of their homes, and the little boxes chew up the green hills and shut out the view. No one likes it when Lego land encroaches on the familiar neighbourhoods, brings traffic and supermarkets and alienation in its wake. Although people do go and live in these places, nevertheless.

So this post is not about the whys and wherefores about planning. It's about the stuff that's left out: the feelings of people and the people who are not afraid to voice them. 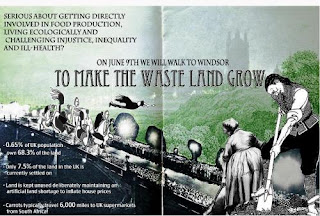 When I first joined in with a community action it was in Oxford in a group called Canal 21, part of Agenda 21, that was originally created at the first Rio Summit. A huge development was taking place in North Oxford and ripping up areas of wasteland, green fields and canalside and placing a lot of stress on the local neighbourhood. People were dispirited and it felt as if there was nothing anyone could do. The developers were in league with the City Council and so far any individual protest had been vilified or ignored. However, as the planning applications were drawn up, the group began talking with everyone who lived in the area, and holding meetings and communicating with other groups, from the allotment holders to the historical societies and started a campaign. We knew we couldn't stop the bulldozers coming in, but we knew we could make it very difficult for them, as well as fight for ecological moorings for the boating community along the canal. We could lessen the blow, make demands and generally bring the issue out into the open.

It was the era of the 1990s road protests and many of the people I knew at that time were veterans of Newbury. Most of them suffered from burn-out, a consequence of battling against a "growth-at-all costs" mindset, with its ingrained worship of property and belief that human developments - from industrial to domestic - are always more important than the earth they are founded upon.

This is an ancient belief in the supremacy of human civilisation and those who are in its driving seat. When you are looking at the kinds of new estates planned around Norwich, alongside the NDR, you are looking directly at that cultural bias. As Denise Carlo of the Norwich Transport Action Group wrote in The End of the Road recently:

Over the past decade, the twin crises of climate change and peak oil have deepened, but they have not altered the tarmac laying ambitions of Norfolk’s elite. . . Norfolk’s preoccupation with road building and hard infrastructure generally is emblematic of the unsustainable global system. Reliance on major infrastructure for transport, telecommunications, energy, water and waste as a means of stimulating and supporting economic activity, underpins the global carbon-generating economic growth and consumption model.

This belief system, coupled with the desire to manage and control and profit, creates a massive driving force. In this driving force, considerations such as rising evictions due to the economic crisis, the privatisation of public spaces, empty buildings and homelessness are not considered. Nor is the effect of activism that challenges these beliefs, such as the current Digger camp outside Windsor and the evicted Occupy camp on Hampstead Heath.

One thing I learned from negotiating with the developers: you are always in the way of their will. 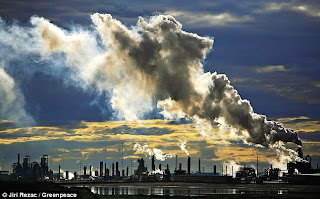 In the 14th century barn at the Museum of East Anglian Life at question time, the audience veered into tangents and it was hard to look at climate change and its effect on the land squarely and collectively. The conversation travelled all over the place. Tidal power, Why doesn't Transition doesn' t talk to the people in Asda? fantasies and tirades and the possible beginning of a new initiative in Stowmarket. And I think it was looking at the final slide on the wall, of Laurence Edward's Creek Men at Orford quay, when I remembered Jeppe Graugaard and what he was saying at our last Dark Mountain meeting.

We were sitting in Ava's wild garden in NR2, full of columbines and yarrow, a blackbird was singing high in the Scot's pine and Jeppe was talking about beauty . . . how it's fundamental, and could be a guiding force in everything we do, And that's really what I wanted to say about Development, by which we mean this week, the proposed housing estates and the roads around Norwich. Some modern buildings are beautiful, and some are sustainable, and some are built with the planet in mind, with respect to resources, water, plants, people. But very very very few. Amongst the hubbub of voices talking about Transition and sea level rise, I felt I was looking for a connecting thread that would make sense of everything and provide a lead for this piece. And suddenly I heard a bird singing outside in the pine tree, and I remembered. 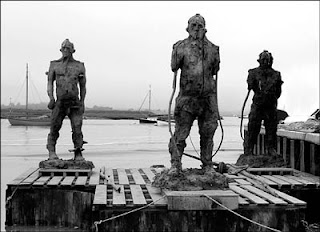 The fact is the earth is beautiful in its all forms and what we do to the earth is not. This is not because we are not capable of creating beauty or being beautiful ourselves, but because the forces that are driving us are ugly and destructive. The earth is round and fluid and diverse and we live in little boxes made of ticky-tacky and all look just the same. While we discuss plans and scenarios and tell ourselves we have to accept it one way or another, whether we like it or not, we're not looking at beauty or the forces that drive us, culturally and unconsciously. We're not looking at how ugliness and those kinds of defeating thought crush our hearts and restrict our imaginations and prevent our reconnection and alignment with the planet. We're not listening to our hearts and seeing there are other ways of looking and acting and being that might lead us to different conclusions. And that, ultimately, this is not our world to be playing with . . .

(to be continued in The Festival of Transtion week on Monday)The Windsor Diggers poster; Occupy Homes action in Washington DC: tar sands refineries, Canada; The Creek Men by Laurence Edwards, awaiting their voyage to Snape.
Posted by Charlotte Du Cann at 17:59