Mr Moyse and the Green Tomatoes 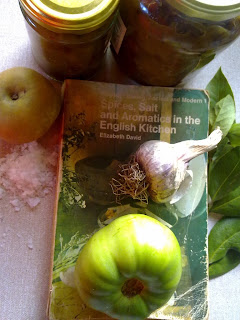 Years ago when I first came to the lane, I joined a neighbourhood action group to protest the development of a tourist railway. It was going to cut through the network of lanes that run along the marsh in the back country of the parish. I offered what I could do as a newcomer. I wrote flyers and press releases and stood up in the village hall, speaking on behalf of the badgers and the blackthorn and the people who love to come down these "commons" on foot, or bicycle, or pony trap. After that (very successful) campaign, I felt I had finally put down roots. Everyone waved cheerily as I walked by their houses. And none more so than David Moyse (75) ex-engineer, steeple- and record keeper, who has lived on the corner of the lane all his life and his family for generations before him.

When I joined Transition the following year, I began to write again, after many years silence, and one of the very first stories I wrote was about the little roadside stall I found with neat bunches of leeks for sale and the man who grew them in his wedge-shaped garden.

It was the beginning of the Low Carbon Cookbook. 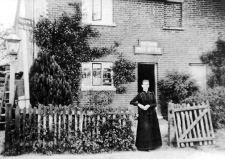 "Near me at the corner of the lane, Mr Moyse puts out his excellent tomatoes at the end of the season on a roadside stall in the manner of Suffolk cottagers, with a tin or jar for coins.They come in three sizes, but all of them are intense. Last year as we walked by we would say how much we were enjoying the tomatoes over the hedge. Just as October was coming to an end I found Mr Moyse walking towards me in a most determined manner:

I had been talking about green tomatoes, how they are so delicious fried and make such good chutney. And now I found myself with several kilos of green fruit and a challenge on my hands. We had got talking when I went round to collect them and I had found out that Mr Moyse’s grandmother once lived in my house. She was the best cook in the lane he said.

So this is a small sustainable tale about honouring the elders and finding your roots wherever you are. Start talking over the hedge and you will make contact with another generation who knew how to live in synch with the land. Talking to the greengrocer in the market town I found he used to deliver milk by horse and cart as a boy (still works two horses), that the man who owns the local organic store originally comes from a dairy farm in Galicia where they still milk their 70 cows by hand. After the evening milking he says the family sit round together in the barn and talk until midnight. The key to human sustainability is communication; and not being afraid to open your mouth and make a fool of yourself. That way you find out that making chutney is dead easy (just don’t burn the pan).

Because I had of course never made chutney in my life. I liked the idea of making chutney which is not the same thing at all. I searched for a recipe from the library, picked a few windfalls from the apple tree and brought out the biggest pan I had. (Well actually it’s the only decent pan I have). Several hours of chopping, stirring and bubbling later the house was redolent with vinegar and mace and raisins and I had ten shiny dark-gold jars in the larder.The largest one I reserved. Six weeks maturing time later, I burst into the Moyses' bungalow and wished them a Happy New Year! I wasn’t ever quite sure whether they liked it, or were just being polite when they accepted the jar quietly with a smile. 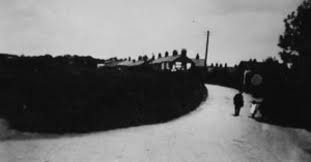 This year on All Souls Day Mr Moise called out down the road after me.

"Would you like some more of those tomatoes?" he said.
"You liked it the chutney then?" I asked.
"It were beautiful," he laughed. "Come round tomorrow."

So now we have a deal. Last year I found out about the history of the lane (his grandfather was head horseman of the neighbouring farm, his father the blacksmith), this year I learned about making wine from the fruits of the hedgerows and the local gardens, from rosehips, grapes, whitecurrants, blackberries, and now I’m having a rethink about all those windfalls I see lying around. Couldn’t we get an apple press and starting making our own juice?

It’s is not an official Transition initiative this lane I live in, but it is a transition lane in spirit, with all the right ingredients for resilience: market garden and barley fields, horses and rabbits, allotments and ancient coppice, wild cherry hedges and oak trees. There’s a good diversity of people too – dwellers of grand houses and humble cottages, newcomers and natives who have been here for generations. The lane brings everything and everyone together. Sometimes we meet and get talking about what the sloes and the mushrooms are doing this season. The plants are always a bridge. That’s when you get to feel you are living in the same place, in the same land, on the same planet. It’s the most extraordinary thing about transition. It makes you feel you belong in a time when you never thought it was possible."

So now, years later, Mr Moyse is definitely David. Now I know he doesn't like being called Mr., and is happy for Mark and I to swing by, talk over the gate, and ask for things if we need them. He has lent us his old lawnmower (which we eventually bought), and we have been enjoying his cucumbers and beans and delicious ripe tomatoes for several summers long. 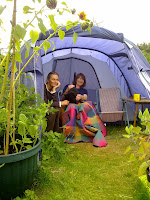 Now I always make my own jam and chutneys from local fruit - yellow cherry plums, damsons, apples, blackberries, and of course green tomatoes. This year I've used large unripe marmandes donated by Mr Pinder aka Malcolm, and several tiny Columbiana cherries we grew arounnd the tent in company with their fellow Solanacea cousins, Hopi Tobacco. I've had to move quickly because Mark is Very Partial to fried green tomatoes for breakfast. Those gorgeous slow-growing marmandes are a big treat too to have amongst a good pan of roast vegetables (right now sweet potatoes, last of the peppers, parsnip and pumpkin). I used a recipe from Elizabeth David's Spices, Salt and Aromatics in the English Kitchen, a very old Penguin I found in a junk store. I added a chilli and used mace and cloves (as there was no allspice in the cupboard), apple cider vinegar and less sugar and salt.

Put all the ingredients in a pan, except the vinegar. Moisten them with some of it and cook gently for appromiximately an hour. Keep adding the vinegar as it bubbles down. When it reaches a jam like consistency it's ready. Allow to cool for a while then then pour into warmed jars. Keep for six weeks at least before using.