Holding This Book in My Hands

Mourid Barghouti, the Palestinian poet, once said that a writer’s task in a world ruled by tyranny and abstractions, is to praise the real and the ordinary. The people in the room, the earth outside your door, the things you hold beloved in your hands. I’m remembering those words as I wrap this Dark Mountain anthology in its brown paper jacket and head out down the frosty lane towards the post office.

This is not how most reviews begin: on a cottage floor in East Anglia, with masking tape. Mostly they are written with the world held at arm’s length, by critics in glass towers. But this is not an ordinary book, and we do not live in ordinary times. This annual collection of essays, reviews, encounters, poems, stories and pictures is, even before you even open it, a beautifully crafted object: its cover the colour of damsons, sketched with a range of peaks on the isle of Skye that look like the interior workings of the human mind. Inside your eyes scan photographs of leaves and drawings of hares. The index presents the contents under intriguing titles: on road kill, on endings, on tools, on history, on creatures.
Already you are engaged on a physical and imaginative journey.

To take the pieces out and view them separately would reveal the individuals who wrote them, but reading them together gives a true sense of what the Dark Mountain Project is about: the collective intelligence of a people waking up and writing as if everything in life mattered. A work of naming then, and sometimes of farewell, charting the vanishing times we witness. And a response to the book’s core question: how do we begin to find our way home?

Central to the book is the essay by Paul Kingsnorth on Dark Ecology and the premise that life does not revolve around human civilisation, but around the planetary systems of which we are part. Kingsnorth co-founded the Dark Mountain Project with Dougald Hine in 2009 with the publication of a manifesto called Uncivilisation. Now in its fourth year, the Project is waymarked by an annual anthology and an arts and literature festival, held on the downs in Hampshire. This year it has expanded into a series of book launches in the UK (Liverpool. Edinburgh, Brighton and London), as well as literary workshops in the wilds of Dartmoor and the Scottish Highlands.

The book begins with the death of badgers and ends with the disappearance of house spirits in an unnamed valley. In between you can listen in to conversations held in London and New York and the forests of Chile and follow poets who track the wild dimensions like small shamans. Some voices are well known, some unknown; all of them worthy of invitation: 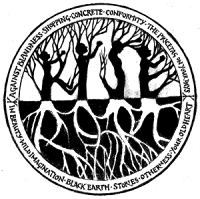 Sometimes a wild god comes to the table
He is awkward and does not know the ways
Of porcelain, of fork and mustard and silver
His voice makes vinegar from wine

Attention to the physical and humble is everywhere: Paul Kingsnorth swings a scythe, Matt Szabo bends like a peasant, the Iraqi artist, Rashad Selim resurrects dead pianos, Dougald Hine and Sajay Samuel discuss the vernacular in culture (“home-made, home-brewed, home-spun”), Caspar Henderson investigates the barely imagined beings of the deep sea. Ian Hill holds a graphite pencil in his hands and follows the trajectory of the mineral through history, from the Cumbrian hillside to the European battlefield. Robert Alcock witnesses a neighbourhood under siege in Bilbao and hopes the kingfishers will return to the post-industrial port that has become his home. John Rember, professor of literature, surveys his class in snowy Idaho and knows, though they do not, that the glamorous ski slopes he once flew down without a care will no longer be their rightful inheritance.

What we have in common is a sense of time and a loss of illusion. Unusually, for a movement that recognises we live in times of unravelling, it creates a literature that feels extraordinarily secure. This is a consequence of facing reality and being rooted in place. Because, when you talk with people who recognise radical change is underfoot, it’s a radically different dialogue to the one where you think civilisation is going to continue, as you have been educated to believe it will and should. The conversation is not there to rush in to fix a broken world, but to discover what we hold in our hands: tools in our sheds, ancestral memory, kinship round a fire, language, imagination, the austere beauty of a rainwashed land. Where we sit, where we have sat, it seems, for centuries, remembering the past, recording the present and imagining another future.


Things will have consequences and in the heart of hearts of thinking people, I believe they know things are going wrong, although they may not be able to articulate it.

This book does what people, constrained in an old system, sometimes cannot. It asks questions and invents new ways to approach an unspoken subject. It recognises that our base camp is the planet we live on, the wild places we treasure in the heart of ourselves, the neighbourhood of beings we live amongst. Creating a new narrative from this brings the possibility of redemption: the regeneration of a land and a people. That possibility has a powerful allure, the feeling you have when the bird returns to the river, and the soil regains life, and it has attracted many of us to connect with Dark Mountain’s network of writers, thinkers, activists and artists, and start up gatherings in our home places. Abstractions and ideals cannot do this, only a restorative relationship with the earth can bring us home.

The resilience of all living systems depends on their diversity and ability to communicate with the whole of themselves. You can see this at play in this book, the way the pieces work, like mycorrhizal fungi, in an underground communications network, On the woodland stage at Uncvilisation this year we stood, eight contributors who had never met, and as we read out our poems and prose they formed a composite story, without our even trying.

What connects us and makes us resilient in the face of collapse, are the things you cannot ordinarily measure or see.

Dark Mountain 3 gives a glimpse of them.