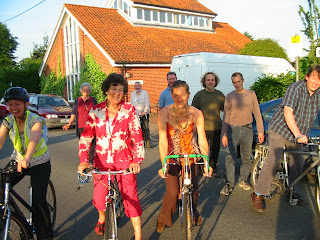 Last night we listened to the second half of the Stoneleigh talk at the 2010 Transition Conference, where Transitioners asked questions about the coming bursting of the finanical bubble.
At about midnight the cat jumped up to be let out of the window. And I looked outside into the warm starry night, into the garden and across the fields and marsh to the sea beyond. What has any of that got to do with this? The moon was a bright sickle over the trees and Jupiter shone brilliantly. On the horizon the oil tanker lights flickered.

The recording was of Nicole Foss responding to questions put to her after what was for many a wake-up call to global financial instability. This thing is going to blow! We knew in our minds that unregulated markets had created virtual wealth, but we hadn’t faced the reality of its consequences.

What should any of us do? Well, some of those answers were practical: putting cash aside and waiting until the price of land came down, investing in tools. Making sure you were in a place where your face fitted. Some of them were ways of seeing the decade that lies ahead, opening ourselves to the reality of a financial deflation. The way Greece is being pushed to the periphery of the eurozone, the way feed-in tariff guarrantees are unlikely to be upheld, that Governments do not play fair and fascism is likely.

But the ones that struck me were those to do with the people in Transition. Those of us who were mentally prepared for such times, showing communities there are other ways of doing things and recognising individuals who may have no money or seeming skills, but are incredible social beings. Who can hold a centre, when everything else falls apart.

Yesterday Helen rang me and said she couldn’t write the blog this week. She is inundated with Knit-In squares. A thousand of them in all the colours of the rainbow. Her original plan to have enough squares for a mammoth woolly to hang over the County Hall balcony for the Pride celebrations has come true. She has been sent squares from all over the world as well as all corners of Norwich. “It caught people’s imaginations,” she said. 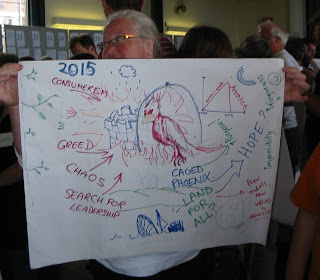 In Bungay this week people are coming to the Library to see our Transition community garden being built. A plan was drawn up after the permaculture course in January but the working party had been waiting for funds. Out of the blue Sustainable Bungay was given £500 by the Bungay Society and so now we can forge ahead with the brickwork for the raised beds. Our fruit trees have just arrived in huge pots, between the rainbutts and the plantswap tables. Suddenly everything is ready to go!

In between the cracks of the system different things can happen. Seeds that were lying dormant, that you never thought were there, break through. You can’t expect them, but you can notice them. You can open your window at night and see Jupiter blazing in the heavens.

Because as well as the imminent financial meltdown there is also a new mood out there in the bigger picture. Of a possibility of something else happening. This is not a grandiose thing that has come out of board rooms, universities and temples. It comes from the bottom up, from the streets and shanty towns, from the people at the end of the line. People pulling together, reinventing their lives and their neighbourhooda. Something that’s happening everywhere - from small moves in East Anglia to the big movements in South America. From Mark on this blog to Oliver Stone’s new documentary, South of the Border.

To tap into that mood is important because if things really go to the wall the way Stoneleigh talks about and within a short timeframe, we’re going to need to hold together. And what holds us together are not the sentiments of Empire, nor the bullying tactics of corporations, nor the glitterati of society, but something far more ordinary. Something that catches the imagination, sparked by people you would never expect to matter. Who have been working in the community and on the land all along. The people in charge of the lifeboat. 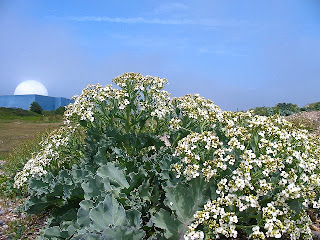 The new push: photo op for the Bungay bike strategy outside the Library Courtyard; looking at the big picture in the Big Group process, Day 2, 2010 Transition Network conference; seakale flourishing outside tSizewell Power Station against all odds.
Posted by Charlotte Du Cann at 14:38