Love in a Strange Climate 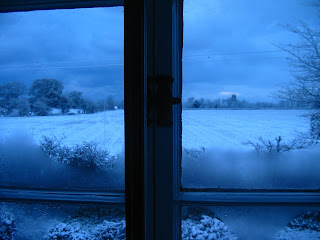 “Well it’s a community-led response to peak oil and climate change," I said energetically. And the woman looked at me as a great divide yawned between us. We were standing at a stall in a village hall on Energy Day. But I wasn’t selling jam and she wasn’t holding a raffle ticket. We had both just listened to John Gummer MP telling us that wearing woolly hats in winter was a Good Thing and Professor Winter explaining how the least carbon-intensive food you can eat are local carrots. And hey, if you heat your house with your own wood and swap your swanky car for an equally swanky but less powerful car, you can keep within the government targets for CO2 emissions. Both the woman and I realise that neither my words, nor those of the men on the platform, have bridged the vast silence that climate change brings within a conversation.

I had arrived at the stall by chance. One day I went to a documentary about climate change called The 11th Hour and found myself in a theatre full of people who knew that wearing woolly hats and eating carrots alone is not going to do the trick. What all the talking heads in the film were saying was that the way to avert the catastrophic consequences of a civilisation that considers itself separate from nature was to link up with people and find out what you can do. So here I was at the Transition East stall, doing all the things that Transition initiatives round the world do – communicating the bad news and the good news about powerdown. But the one thing none of us had yet done was talk to those people up on the stage, the politician and the professor, the penultimate of the 63 Transition ingredients now being assembled, Pattern 6.1 Policies for Transition.

This month we got our chance. It was called the Big Climate Connection, organised by Stop Climate Chaos Coalition, a group of over 100 NGOs, environmental, faith and community groups. Last year SCC organised The Wave in which 65, 000 people marched to Parliament. This year SCC organised a national lobby of over 190 MPs in the UK. And Michael Uwins from Friends of the Earth in Norwich was on the telephone. "Peter Aldous, MP Waveney is on the Environmental Audit Committee," he said. "We need someone to talk with him." "Oh, Kate will be brilliant at that," I said. "We’re counting on you," he said. 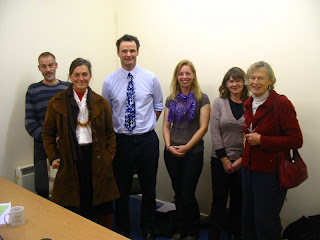 And that is how I found myself with Mark and Kate and Nick and Lesley and Daphne from Sustainable Bungay inside Peter Aldous’s office in the severely downturned seatown of Lowestoft. Aldous was newly elected in May and has just moved in. It was empty and there were only two spare chairs, so most of us sat on the floor. "Do you mind if I eat my sandwiches?" he asked. "I don’t know whether they sustainable or not.”

“Well, they are brown,” I said and laughed.

The lobby was meticulously organised. We were given a lobby pack with instructions on how to set up a meeting and what to say and how to feedback. Top of the agenda was to put forward three "asks" related to the Energy Bill and the UN summit: energy efficiency in homes, a cap on carbon emissions from power stations and support for low-carbon technologies in “developing” countries. (You can read about the meeting in full here).

Talking with politicians is a strange affair. They nod and listen but you never know whether they will act or not. And we are cynical creatures, knowing how politicians are lobbied, courted and heavily influenced by corporate powers, in particular the fossil-fuel industry, who dismiss climate change as a millennial belief rather than a scientific fact. And I am particularly cynical having been brought up amongst Conservative MPS and their grandiloquence. Aldous to our surprise was well-briefed, friendly and generous with his time (one hour). He agreed to all the asks and to follow up this meeting with another in four months time. We covered a lot of ground and focused our attention on the creation of an infrastructure and resources to implement renewable energy and community projects. 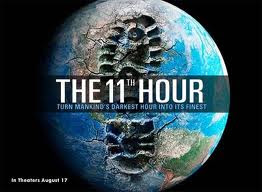 Would anything come of this lobby? It’s hard to tell. But it’s what we took part in joyfully and energetically the six of us on the fifth of November, one tiny piece in a vast planetary jigsaw our minds can barely comprehend. To influence the course of history the so-called bottom up grassroots organisations will at some point have to negotiate with the top-down policy-makers. And we’re not well versed in that. We like to have opinions and criticise and pull down, but we’re not so keen on making efforts outside the parameters of our known world. I didn’t want to organise a lobby and was hoping Kate (who is running for the Green Party as a District Councillor and had organised a coach to the Wave last year) would do it. But it ended up being me.

And so I had to read what the Energy Bill was about in the same way I have had to read books about climate science and peak oil, give impromptu seminars on community transport, write about the unpalatable facts of the industrial food system. We have to get smart. And we have to get constructive. Because it’s one thing having a gut feeling about climate change (which most of us do) but if you talk with policy makers you have to have more than a gut feeling. You have to know what you want as a people. You have to be able to put yourself in the politician’s shoes and learn their language and you have to teach them yours. Because unless we start speaking together and forging a dialogue, making bridges across that divide, we won’t be able to see what lies ahead of us and what we can do about it. Because no matter how much we care as individuals or community groups what will really change things is when the active forces within society perceive the real situation together.