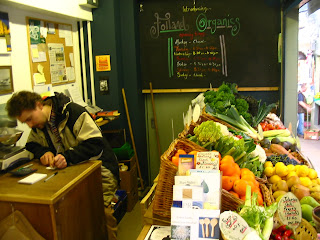 The cookbook is a new working project. It began with the "low carbon snacks" for TN's Anniversary party in 2009 and the food sharing at the Transition Circles (most of the cooks and writers have either been part of TN2 or are Carbon Conversations facilitators - or both). In our first meeting this September we mapped the territory we would cover – the ecological "deconstruction" of dishes we'd brought. In October we mapped the construction of the book. We decided we would follow the seasons during the course of a year, cataloguing what came and went through our larders and kitchen, what plants we grew, what wild things we foraged, our most nourishing and lovely meals.
Apart from giving a carbon readout of every dish, the book's function is also to collate and cohere the independent food producers and sellers in and around Norwich, including the CSA (which Elena is writing about on Thursday) and the bakers working with the Milling Project, like Steve Winter of Dozen. We’re going to chart their inter-relationships, with ourselves and within the city. We’re planning to create a Norwich-based workbook that can be copied by other Transition initiatives.
Key to this project is the reestablishment of our proper relationship with food, with vegetables in particular. Vegetables lead us back to right relation with the earth, whether you grow your own, buy a veg box or go into the markets and farm stores that sell local produce. 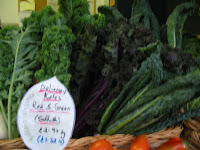 Eating low-carbon means procuring your food in a very different way. You have to know where to go. To a bunch of outlets, not just one. It’s an absorbing task. The attention you pay goes deep and wide. You have to be aware of transport (yours and the food's), of packaging and become keen to the relationships with people. The people you don’t see who grow the food and process it and the people you do, who sell it. You become aware how small producers and local businesses depend on the loyalty and the engagement of their customers.

“Regular customers are what keeps this place functioning. They are the key drivers. You can’t compete with prices, with fruit for example, but you can with locally grown veg. It's about freshness because you are buying direct. "

I’m talking with Robert who runs Folland Organics in Norwich Market. We’re standing in a quiet moment on Saturday surrounded by local mushrooms, Demeter Seeds, Fairtrade bananas, long bunches of celery, dark brassicas, scented apples, skinny new leeks, squashes of all colours and sizes. Looking at the gnarly parsnips and celeriac in the rough wooden boxes you know winter is coming. Already your focus is turning to the deeper darker dishes. Soups and stews. 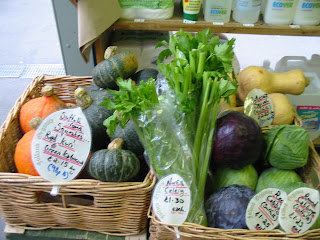 Robert buys his organic veg from three main sources in Norfolk: a smallholding in Greshams, established on the principles of community exchange, Grahame and Lizzie Hughes (founders of Eostre Organics) in Bunwell, and the biodynamic farming community of Thornage Hall where Robert, also a musician, plays piano for eurythmic classes.
The edge he has lies in the proximity of these suppliers. it means leaves can be cut at the end of the day and by morning they are on the stall. “People who are using it are using it with enthusiasm. You have to fan the flames."

This is the key really. Big stores can have the dazzle and the PR but they don’t hold a connection with place and people, with the time of year, with the heart of things.

“The important thing is the link that is being made. If there are not places like this where can people get their organic stuff? Supermarkets. You’ve got a quality issue. They are already bored with it."

Robert has a theory about this unsustainable food systems we've been caught up in: "Everything is going faster and faster. In the end the supermarkets will float off and people will fall to the bottom. You always have to run to catch up with them and then one day you can’t catch up with them, and they’ll realise people aren’t with them anymore. It’s important to do something else." 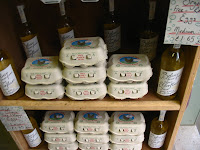 Brought up alongside Portobello Market in London, I always bought my fruit and veg from stalls. I don’t jibe with perfectly sorted produce on trays, covered in plastic that seems to have no relationship with the outside world. So when I moved to East Anglia and walked into the then-steaming labyrinth of Norwich Market I felt at home. The stamping of feet in the cold, mugs of tea alongside the till, the starlings stealing crumbs from the cafes, the banter and the exchange. The stall was then run by the cooperative Eostre who started it up in 2003. At the time it was the country's only 6 day a week organic market stall and one of the only places in the UK outside the supermarkets (and very few of them stocked them) that one could buy organic Fairtrade bananas. I regularly bought fairtrade coffee and secondhand books from the market, and a big bag of fruit and veg, stuff I had never even seen in London, like giant sweet lemons. Later when Eostre folded it was taken over by Salle Organics, and then by Robert who had worked on the stall in its early days. "It’s come full circle," he says, smiling, and puts my biodynamic apples in a paper bag. 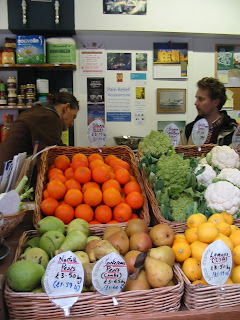 When the market was revamped two years ago many of the stallholders suffered. People didn’t approve of the Council's redesign, the flow-through was altered due to the repositioning of busy traders like the keycutters (who once formed the back row) and a change in bus routes. The dynamic shifted. But Robert is still there and it's a really good stall. A gem that needs to be treasured. Keeping the supply chains close to home is what creates resilience in communities. The money that goes into the stall stays within the circle of people that Robert trades with. It doesn’t flow out into the insatiable maw of the global food machine. And somewhere inside, where everything matters, it makes sense of the world.
Folland Organics is at 30/31 Norwich Market. Inquiries to robert.folland@phonecoop.coop. The Low Carbon Cookbook's third meeting is on 23 November at 7pm. Inner Space, Maud Gray Court, St Benedict's St. Bring ingredients to make a meal.
Posted by Charlotte Du Cann at 12:51