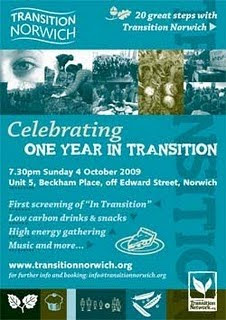 Welcome to our first Transition Themes Week! We'll be running this week most months, to give you an insider peek at what goes on behind the scenes in some of the Transition Norwich meetings and projects - from neighbourhood groups like NR3 and Transition Circle Hethersett, to theme groups such as Reskilling, working groups like Communications and Permaculture, projects such as the CSA and the Low Carbon Cookbook, opening to include our outreach connections in the city as well as the Transition movement on a regional, national and international level. We'll be looking at some of those 63 Patterns or Ingredients that are being discussed interactively on http://www.transitionculture.org/ at the moment. Today to kick off the series we're looking at the genesis of the hub group, Communications . . .

The very first meeting I went to in TN was a Heart and Soul, Arts, Culture and Wellbeing gathering at the Playhouse. It was packed (25 people) and everyone was talking at once. One voice was particularly strident: the Most Important Thing was Marketing. This voice was evangelical and fiery. We must go into the streets and spread the word! "We need editorial!" I chipped in, not sure whether to be alarmed or excited by all this passion and zeal. Chris intercepted the hubbub in his characteristic mild way: "We're thinking of forming a communications group." Afterwards I went up to him. "I'm in," I said.

The first communications meeting was held several weeks later at the same place and was very low key. We were 5 people and pragmatic. We had a website to set up, events and gatherings to organise, to make the most of the moment, the zeitgeist as Eileen put it. "Has anyone got a pen?" asked Tully. "I have," I said. "You can minute this," he told me. "We need a creative structure," I told everyone, "A co-ordinating editor and correspondents for all the groups. Like a beehive". And that was how it began. I had never taken notes for a meeting in my life, I had never worked on a website, used a googlegroup, hosted a stall, designed a newsletter, facilitated, blogged or Tweeted. I was an ex-journalist from another era. One thing I knew though: I knew the value of editorial. I knew that the low-carbon world we were all mad keen to manifest could not just be transmitted as marketing or information, by workshops or reports or strategies for behaviour change. 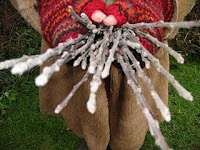 Modern communication tools are useful, but they do not tell the whole story. We are not people of the left brain only: we are creatures of sense and sensuality, imaginative, intuitive, creative, and some things about life, about downshifting, you can't put into a memo or a Surveymonkey. To create a real and vibrant culture of powerdown we can't just communicate in that split second it takes to send an email. Or to be radically inspired by an idea in a meeting. We have to be able to pause in the middle of a sentence and talk about our experiences: Hang on a minute, let's look back at that track we just made. Was it the right one? How does it look? How does it feel? Is it beautiful? Where are we right now? Is this the place we meant to get to? And who are my companions?

Communication is many things in Transition: bulletins, meetings, calendars, press releases, parties, events, stalls, emails. It's working till 4am with Andy on this poster we designed for the First Anniversary celebration. It's taking a branch of bay leaves to the Heart and Soul group and speaking about its oracular qualities to a circle of strangers; it's talking on BBC Radio Suffolk at 7.20am about showing The End of Suburbia ("We love our cars," said the rush hour presenter, "What do you say to that?"); it's standing up in front of a crowded room without notes and encouraging everyone to take part in the new move of Transition 2.0. A call to arms. "I've just been reading a story to some children," I said. "It's called the Bear Hunt."

Two years later Communications is working on this post this frosty morning, knowing my fellow bloggers are going to be writing after me this week - cataloguing the shifting and changing configurations of people that make up a Transition initiative. What it's like to go through this process, the good stuff and the hard moments. The profit and the loss. Valuing everything. We're not scared.

Thanks to this technology, we've got a good archive stored up now, like so many shiny bottles of summer fruit in a larder, like honey in a hive. After several meetings in cafes and what seems like a thousand emails, that editorial structure finally took its place in the news blog. We're leaving a colourful track behind us, so others can follow. That's the most important thing about communication, as any writer will tell you. You're part of keeping a door open, a possibility, so the future can happen in the way in all in our hearts we would wish. Even if we never get to see it.

What a beautiful day!

Poster for TN First Anniversary Party by Andy Croft: Egmont russet apple twigs from Powerdown (Feb 3) on the TN blog; banner for the May Bulletin on the Stranger's Circle by Mark Watson;; TN's Twitter logo.