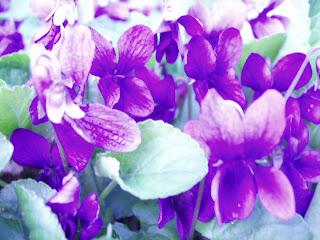 One night last week I came through the gate and halted on the dark garden path. There was something in the air. What was it? Something ineffable, strange, marvellous. I called out to Mark who was walking down the lane. Breathe in as you come into the garden!

The odour of sweet violets. The flowers catch you unawares, containing as they do a singular property (ionone) which means you cannot smell them directly, or you might, but if you lean down to capture it it disappears. Maybe this is why they have been honoured as the flowers of memory. Because memories come like violets in a night garden, when you least expect them. And when you seek to hold the moment you realise it has already gone.

I had just been to the World Book Night at the Bungay Library as part of the Suffolk campaign to save our local libraries. The courtyard garden there was crammed with give-and-take books, there were petitions to sign and glasses of wine to drink and upstairs the local poet’s society was conducting an open mic session. I hadn’t thought about poetry for a long time. Once it had described and made sense of my whole world.

Suddenly amongst the creaky folk songs and polite lines about Spring a tall young man in a great coat stood up and recited an outrageous satire on the millionaire coalition government. It had a rollicking Hilaire Belloc gait. Polished and savage and loud, the recital was unashamed. A wild card amongst the well behaved community audience. I clapped wildly. It was Luke Wright, one of a group of young performance poets who came out of UEA known as Aisle 16, who had since gone on to run a club in London and appear on Radio 4..

Downstairs Margaret, a fellow Transitioner, had being accosted by a Tory matron.
"She was very upset," she said.

I laughed: He always shocks people, I told her. I had come across Luke Wright when I was working for the Poetry Trust. He and his fellow poets had sworn and swaggered and shaken the tea tent of the alternative fringe of the Aldeburgh Festival and some of the dowager patrons had walked out. 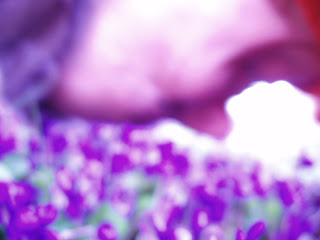 That’s when I remembered The Fall of Rome, a political poem that suddenly breaks away in its last lines into another world. How it is when we are intensely focused on one thing and out of the blue something unforeseen enters our field and reminds us of the bigger picture. The poem is by W.H.Auden capable, like all good poets, of delivering a perfect shock. The poem is set in a city that is Rome but all cities and all empires since. It is 1947 when the poem was written and also now:

When we do we will have to remember how to order our lives: not as they have been run, according to the laws of Empire, but according to the rhythms and measure of Earth. The Hopi call this measuring principle wild turkey. Amongst the most impeccable and ritualistic of peoples, growing corn in one of the world’s most inhospitable landscapes, the Hopi keep a door open for the wild things to enter. Because they know that for life to work for human beings, everything we domesticate from creatures to the growing of crops to the building of settlements, needs to be in balance with the wild and unexpected. The Earth is not tame in her nature. She has a wild and stormy heart.

Civilisation is a closed-system that attempts to control, possess and use all the resources of the earth for its own benefit. But the Earth as a whole multi-celled entity (including ourselves and our imaginations) is an open system, as anyone who has studied chaos theory will recognise. All closed systems live within the fluidity and dynamics of the open system and are subject to its laws, not the other way round. We either respect those laws as symbionts, or we don’t and become parasites. Either way, the laws of earthly movement still hold. The storm breaks and how we have acted in the past plays out in the future. When things become limited, chaos enters the field. When the city becomes decadent the barbarians 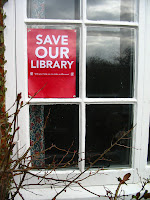 enter from the North. The poets start raising their voices. Some of us start listening.

Sweet voilets by the road, Save Our Library poster in the window by Mark Watson