"Did you just say Monsatan?" asked the lawyer. "I did," I said and laughed.

We were at the Spring Regional Conference of the Suffolk Agricultural Association in Ipswich. The subject was Climate Change and Food Security. But you could have retitled the conference: Climate Change: What a Great Opportunity to Promote Bio-Tech (and all the agri-business corporations that own the seeds and pesticides and fertilisers that make it possible).

We have to feed the 9 billion! declared the Chair, former minister for agriculture, John Gummer (now Lord Deben), and provide those miraculous loaves and fishes. East Anglia has to become a bread basket for the world!

So to prepare us for our destiny we listened to the scientist who talked about the perfect storm of climate change and how emissions from agriculture, principally nitrous oxide (from fertilisers) and methane (from intensively-reared animals) contribute to it. We saw maps that showed how Britain would remain part of the fertile strip as global temperatures rose and graphs that our home production of both grain and livestock were down and our imports up. We listened to the agriculture manager of Waitrose explain how they have plans to double their profits by 2016. And most scary of all we listened to MEP, Robert Sturdy who had no time for smaller farms, believed agriculture should be market-driven and regretted that so many good fungicides and herbicides had been withdrawn by the EU. 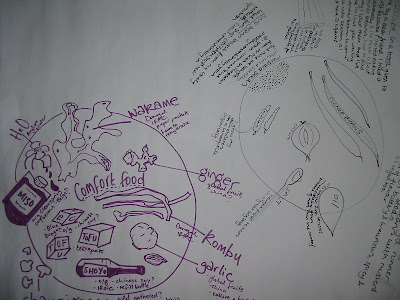 Basically we were confronting an impossible task: to produce more food with less land, less water, less pesticides, less fuel within a low-carbon economy, that is also a growth economy where no one is giving an inch.

“This is biggest issue agriculture has faced,” summed up the Chair, "And unlike the Depression of the 30s or the Black Death we are not facing this in ignorance we are facing this in knowledge. And because we know therefore we are responsible. People don’t want to know of course," he added, "Because once you know it changes you and you become ashamed.”

The farmers with their sunburned faces and tweed jackets remained for the most part quiet. The room was filled with their silence, like the mute East Anglian fields of wheat and barley, sugar beet and rape. Obliged to grow commodity crops, following the dictates of agronomists, governmental ministers and the demands of the market, they have been listening to these clever patronising voices for a long time, in a feudal land that has been under the plough for thousands of years. Their harvests are now utterly dependant on fossil fuels and agro-chemicals. And they know it will take more than a sermon on Genesis to bring those once-fertile soils back to life.

I am not a farmer, an agronomist, a scientist, nor any kind of expert. But I recognise when words are being used to dominate people rather than liberate them. The elephant in the conference hall, the beast who has already slouched his way across the planet, is our present global industrial food system. Manipulated by giant invisible corporations and made possible by a vast and complex distribution network it’s a machine that munches through eco-systems 24/7 and seems impossible to halt. But like all machines it has a crucial dependency that no-one likes to mention: its energy source.

Occasionally at question time other voices were raised. “What about peak oil?” asked my fellow Transitioners in the room.
“And what about peak phosphate and peak nitrates?” asked Lady Cranbrook of the Alde Valley. “Do we have a national food store? Or are the lorries our larder?”

Lord Deben laughed: That one I can answer, he said. We don’t have a national store.

We are, as the fuel protests by farmers and drivers showed us in 2000, famously 9 meals from anarchy. 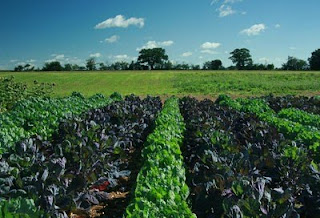 The voices of the politicians rose as they imagined a formula that would conjure manna from heaven. In the future, declared the scientist, bio-fuel crops will spread across the landmass of Europe the size of France and Spain! We will have genetically manipulated, input-free, flood-resistant rice! We will run vehicles on electricity! We could argue about that for decades, he said.(Decades? As the carbon emissions in the atmosphere have risen to 380 ppm and the price of petrol has risen to £6 a gallon? As the price of wheat has doubled? As food prices in Britain are rising more steeply than any other developed country?)

Gummer’s argument (more theologian than politician) was that because we know about bio-tech we have an imperative to use it, the assumption being it gives higher yields. But we also know about organic farming, practiced for millennia without pharmaceuticals, that a fertile soil locks in carbon and that we can eat lower down the food chain and not waste a third of food we buy.

If you watch documentaries about modern agriculture such as Food, Inc. or read books by Felicity Lawrence or Michael Pollan, you also know that in order to feed 6 billion people fairly and squarely, let alone 9, we are going to have to radically alter our Western diet and powerdown, both in terms of what we eat (less meat and dairy) and the energy it takes to produce. We’re going to have to shorten our food supply chains, build up an infrastructure of small local producers and distributors, learn how to cook and grow, and get used – in austere times – to paying the real price of food.

At present we pay a mere 10% of our disposable income for what we eat. This is because cheap oil has created cheap food and because we don’t care to look at its provenance. We have fallen into what the writer Thomas Berry, calls the industrial trance. As we enter the shiny supermarket malls our minds glaze over the environmental damage caused by farmed salmon, or the reality that “local pork” is fed on Brazilian soybeans or that behind each colourful packet there are workers in fields and packing houses being brutally exploited. To pay the real price of food means giving up an escapist consumer lifestyle that makes our own hard working existences bearable.

And the present business model, as local farmer Lucy Wyatt pointed out, is going in the opposite direction. It’s encouraging us to keep disconnected and under its spell. 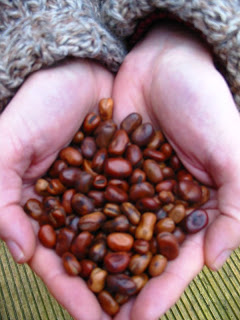 Maybe it was when the MEP started talked about the “moral imperative to grow more food and embrace this technology.” Or maybe when the man from Waitrose explained how they monitored “the eating experience of our customers” that I remembered Mourid Barghouti when he spoke in the Jubilee Hall in Aldeburgh just down the coast from here. The Palestinian poet was urging writers to use real words to keep a certain world alive and another at bay. Those in power, he said, live and talk in grandiose and abstract terms. They do not name the physical things of this earth: the ordinary, the beautiful and diverse. The names of plants and places and people. This was our duty. And maybe this is the right and only response to a “conference” at which a small elite spoke and most of us kept silent, where a cow was called a “product” and all the attention was on the latest marketing deal with North Korea. To name, without shame, what all of us really know.

There are farmers in Norfolk who grow amongst the commodity crops a heritage wheat known as Blue Cone. In Darsham an ex-mechanic called Malcolm treasures an oasis of kale and squash and spring lettuce on his smallholding. On a roadside stall in Reydon each day a woman called Sarah puts out jars of marmalade and fresh eggs for sale. On my windowsill there is a plant that has held glowing red chillies all winter. Its name is Ring of Fire. These humble relationships connect us with the fabric of life, which, whether the storm hits or not, is our only real security.

There is network of growers, allotment holders, writers and cooks in East Anglia working to re-establish a right relationship with food. Some farm, some teach schoolchildren, run shops, advise on sustainable food distribution. Some of us are relearning skills: how to grow leeks and raise chickens, swap seeds, share community kitchens and gardens. We're learning how to store apples, how to graft cherry trees. How to relish a simple dish of potatoes and beans, to eat radically outside the system controlled by corporate agri-business. It’s a different kind of culture. It’s not feudal. It's not dominated by those voices. Civilisations famously rise and fall according to their ability to feed their people. But sometimes it’s the people who start to feed themselves.
All photos from the Transition Norwich Low Carbon Cookbook project: Deconstructing the Dish, Sprouts and clover from Oak Tree Low Carbon Farm by Richard Mudhar; handful of dry field beans by Mark Watson.
Posted by Charlotte Du Cann at 09:21