Being the Anchor (Pausing for Reflection on the Transition Conference) 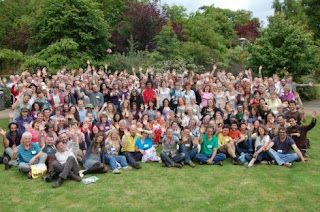 One thing I learned from plants, I said to Dan as we headed home to Suffolk and resumed our discussion about roadside herbs, is that whatever you experience in the company of the plant that is the medicine. What makes the medicine is the looking back on that experience afterwards, the dialogue you hold about it and the story you then tell the world.

So after the whirlwind three days in Liverpool what is that story? I wanted to experience everything - the 90 minute workshops, the three hour workshops, the open mike session, talking with the friends I’ve made in Transition who I can’t see everyday - and like everyone else I couldn’t. I missed the Tree Walk, the singing Flash Mob in the canteen, the roving storytellers, the incredible bookshop in the foyer. I had a job to do: I was disseminating all the publicity and media and comms work we do in Transition. I took part in all the main events of the conference to keep pace and then I returned to the Media Action Station, liaised with Ed (web coordination), Mike (photographer), Chris (audio), David (video) and all the conference bloggers who swung by.

When I stopped running and accepted my small role in the whole pattern, that’s when everything started to make sense.

To be an anchor as a communications person means you are in the midst of the action. You report back to the studio and that dialogue makes the broadcast. Being an anchor in a medicine sense has another function: it means you are prepared to put yourself in the eye of the storm and allow that change to take place within you. You are grounding yourself wherever you are, finding your bearings, and bringing the knowledge of what you know into action. Harmonising all those different voices. And that is not an easy position. It demands all your attention, all your feelings, all your time.

We were here to enjoy ourselves, to network, to celebrate, to engage in discussions and explorations. But we were also here to work. And the work of the future means we have to break out of the repeating patterns of the past and live life urgently and for real and not as we have been taught as a theory in our heads.

The conference was a metaphor for Transition, the kinds of pressures we have to withstand, the break-out moves we have to make. Held in Hope University (an ex-Catholic teaching college) the modern buildings kept us in their scholastic corridors and meeting rooms. We spilled out onto the lawns at midnight like noisy students and experienced a certain pressure that in many ways felt like a final exam. You might not know (unless you made that journey) that you were actually in Liverpool. It was hard to find home, said Jo and Inez at the final plenary in the chapel. Or feel close to the earth. Even Jay Griffiths' eloquent talk about wildness felt strangely academic.

We were people in a fishbowl with ideas, responses, theories, we had exercises and workshops and games that enabled us to come together and design a future of energy descent. Beyond the glass windows and the air conditioning lay the real world. What brought it into the room were the messages that came from the outside, particularly those political stories from Transition Heathrow and from Transition Barcelona who on Sunday night showed us videos of the extraordinary uprisings that have been taking place in the main square. How thousands of people in response to the financial and political crises of the times have come together and started to discuss a different way of doing things. Earth care, people care, fairshare.

This is the story of our times: the people who have been working for years persistently, in activism, in Transition, in permaculture and medicine, who suddenly when the moment comes, bring those principles into action. In the city squares of the world the people are gathering to design a future that they want. A democracy that is not dictated from above. One that comes out of neighbourhood, community ownership, sharing of resources, consensus decision making, participation, communication. One that is immediately local, but connects with people everywhere on the planet in the same situation. It self-organises because the people who hold those principles in place put themselves in anchor positions. They hold the change. This is not leadership or control, nor is it random and chaotic. It’s another function entirely.

Last year Nicole Foss in her talk said there will be people in the future who you might not have noticed before, because in the industrialised, push-and-shove, hierarchical culture we inhabit, they are given no value or are taken for granted. But in a time of turbulence their presence becomes known. They are the anchor people who stabilise, who connect, who include, who cohere, who make sense in a time when everything seems to be falling apart. Who bring lightness and possibility in a a time which appears heavy and dark. Who, because they know what to do, so does everyone else.

When the police forced the people out of the Plaza Catalunya the spirit of what had taken place went into 23 neighbourhoods in the city and fired everyone into discussions and community-based actions. People got together to prevent the police evicting their neighbours (thousands of homes have been repossessed by the banks). Groups went into the countryside and took the news of what was happening which had not been reported by the mass media. They are walking now through Spain, going from village to village telling the story.

We met in Liverpool and now we’re returning to our villages and towns and neighbourhoods, telling the story of how things could be different in our words and actions. There are many stories that emerged out of the conference and I hope to relate all of them over the coming months. Today this was the one I chose to tell. Because Transition happens for real when we go out and join in the square with our fellows. When we put our feet on the earth and make ourselves at home. That's not a given, it's a task for everyone who longs for change. I could finally relax at the conference about not experiencing everything because as people came by and told me their experiences they became mine too. Transition is not an individualist story: it's a composite one, many stories told by many people.

Time to stand up and speak. Time to become our own media.