Benchmarks or Why I Don't Read Like I Used To 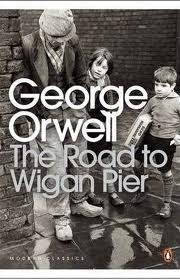 I have a confession. I don’t read books anymore. Or rather I read books very rarely, and as I began this blog this morning I wondered was this just me, or was it a symptom of our age?

Like all writers I read a LOT of books when I was young. I spent a childhood immersed in fairy tales, my student life devouring English Lit, my working life reading for publishers and media. By the age of 35 my kitchen housed a library of well over 2000 volumes.

"What are you going to do with all your books?" asked my friends aghast when I told them I was leaving the city to go on the road.

"I’m going to sell them," I said. And they were shocked that I should do such a terrible thing (more upset it seemed than by my imminent departure).

So they went: all my linguistics text books, the bent-spined Modern Classics, a collection of American novel first editions and illustrated versions of Alice in Wonderland, paperbacks, poetry, philosophy, plays, all the Great Works from Beowulf and Virgil to the latest smart and complicated novels reviewed by the Sunday Times. 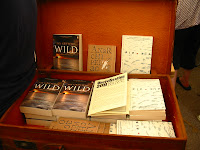 After that I just read what I found in various cafes and swapped with fellow travellers. I began to spend time in libraries: leafy courtyards in Mexico; the vast reading rooms of New York. I began writing my own notebooks and forgot about keeping up with High Culture. I stopped reading fiction and started immersing myself in mythology, psychology, deep ecology, stories about people who changed their lives. When I returned and began to write up my own adventures that reading list decreased also.

Re-reading Jung's Memories, Dreams, Reflections late one night I realised I didn’t want to end up living in a solitary tower like the old psychoanalyst. I realised reading books had become an escape, something I looked forward to at bedtime. Then I saw an old lady reading by lamplight in an armchair in a Suffolk cottage. There was a stack of fiction beside her, mostly detective novels. "She reads for hours," her daughter told me as we stood there watching her scan the pages oblivious to our presence. And I shuddered. 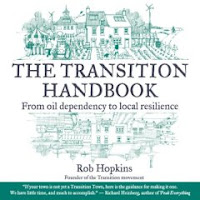 When I joined Transition shortly afterwards in 2008 I read several of the seminal texts: Rob Hopkins' The Transition Handbook, Richard Heinberg’s Powerdown and David Korten’s The Great Turning. They shaped a way of looking at communities and the earth I knew nothing about. But once I felt I “got” Transition I was more interested in doing and writing about it than reading theories behind the social, economic and environmental shifts it demanded (though I now read a lot of my fellow bloggers on these subjects). Books about cultural change like The Tipping Point and The Empathic Civilisation frequently revolve around one great idea, sometimes spun out over hundreds of pages. And although those ideas were often really interesting they originated from within a scientific and establishment mindset and often lost my attention.

The truth of the matter is that the way we understand the world and transmit ideas has changed. We don’t need a pages of details once our imagination has been fired up. It’s changed with social media, with the democratisation of writing on the net, but also because we as people are in a time of shift and these often plodding academic texts don’t capture that spirit of the times. They are not written from the front line, in the thick of things, by people who are active catalysts within the collective, as touchstones for change.

We’re a people waiting for that new narrative to arrive on the shelves. 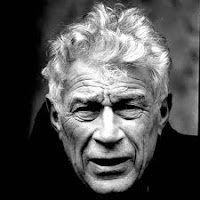 Hold Everything Dear - Dispatches on Survival and Resistance by John Berger

This is a week about giving a book you would want someone else to read, a life-changing book, a transmission that might make you look differently at the planet and start to powerdown. Looking back at the great world literature that once occupied my imagination, the texts I remember are not the stuff of romance, novels or biographies or bestsellers. All of them are non-fiction and all of them radically challenged my world-view: George Orwell’s The Road to Wigan Pier and Roland Barthes' Mythologies made me question (and ultimately leave) the acquisitive society I was brought up in. The Drama of the Gifted Child by Alice Miller revolutionised my interior life, Christopher Hill’s The World Turned Upside Down my understanding of history and politics.

The Transition book I would leave on the bench (if I owned it) is not however about peak oil or climate change, the financial crisis or growing vegetables. It’s about something else. I don’t write this with the book in front of me but from memory because it stayed in my heart. 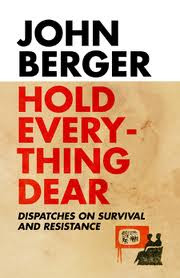 Hold Everything Dear is a slim book about a journey to Palestine and written with all the spare poetry and intellectual fire of old age. The real business of writing is to uncover truth and transmit it in way that others can know it also and act in their own lives. It’s not to distract or to entertain or to keep the left-brain occupied on a train or beach, or to fend off boredom and the fear of death. My private universe. It’s there to startle and transform, to break the illusory bubble that imprison us and the Empire (as Korten describes it) would be happy we remained. To exchange vital knowledge and ideas. To awaken us from our individualist torpor and to connect us with the vibrant collective intelligence of all people who desire a different world.

John Berger goes to the front line and sees for himself how the Palestinian people are living. He looks at the hyperreality of the media, the business of war, at poverty and privilege. He stands by a group of donkeys and by a young boy watering aubergines under olive trees and locates himself in an ancient land. He sits at his writing desk at night and addresses the dead revolutionary artists he once knew. The future is fraternal, he says. He is 79 years old and he is still a Marxist and reading these pages you know why. When the chips are down hold everything dear he is telling us. The people that matter, the trees that matter, the life that matters.

For me this is the true frame for Transition. Belonging to a people who are intellectually active, politicised, fraternal with our feet in the beauty and form of physical earth, part of a lineage of writers and activists who have been dreaming of freedom for millennia and are prepared to put themselves on the line for it. 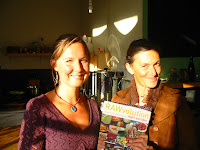 It’s a literary thread I rediscovered this weekend at Dark Mountain’s Uncivilisation Festival and plan to write about next week. Meanwhile here is a picture of Jo Balfe and me and book in her café, The Nectar (where our bookcrossing event will be on 24 Sept), taken last night as some of us gathered to share our knowledge about food and the future. Happy reading!

Cover of The Road to Wigan Pier; Jay Griffiths' Wild in a suitcase at Uncivilisation Festival: John Berger and cover of Hold Everything Dear; with Jo and RAWvoution at The Nectar Cafe.
Posted by Charlotte Du Cann at 07:01