This is the House Transition Built 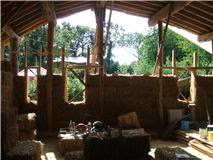 What is the house? Is it a dream we hold, a fairy palace, a shelter from the storm, perched on a hill, overlooking the sea, somewhere down a farm track or a long drive edged with lime trees? Or is it a nightmare, the haunted house, the house of childhood secrets we fear to reenter, the slum and the council estate we long to escape from, the little boxes on the hillside we are loathe to see?

This week the house is a practical place, a building in Transition, in cities and villages where property is valued more than people and everyone is assessed by their address and the colour of paint on their front door. As the Government is poised to relax planning laws that will make it easier for developers to tarmac the green fields of England, while the Green Deal gets pushed back and low-income city dwellers pushed out of the smarter neighbourhoods, our relationship with the House is changing.

No longer a place of exclusivity and security, it has become a liability. The economic downturn and soaring energy prices have made our homes the highest financial burden most of us carry. And, as we come awake to peak oil and climate change, also a burden on our conscience. To change our relationship with the environment we need not only to consume less we need a different attitude to the shelters we build and inhabit. Including those in our imaginations.

How can we create an aesthetic of downshift in a culture of aspiration?

I once spent my working days visiting people’s swanky apartments and villas for magazines like World of Interiors. I styled photographic shoots of heritage chintz curtains and designer chairs and unwittingly upheld the aesthetics of Empire. I had grown up in London’s Bayswater district in a Victorian white-fronted house, serviced by a crew of professional builders, carpenters, interior decorators, window cleaners and dailies. And yet I always longed to live in simple vernacular spaces - artist’s studios, rough Greek interiors, thatched cottages. When I sold my city flat and went travelling I got to live in a series of palm-leaf cabanas, wood cabins, yurts and adobe roundhouses and eventually settled in a cottage that resembled the one in the Kent marshes I had loved as a child. It doesn’t belong to me and yet it feels like home.

So when it came to my turn on the blog this week I wanted to look at two Transitioners’ houses that reflected this personal and contemporary downshift: a retrofitted house in Norwich owned by Stefi, one of the movers and shakers behind the Magdalen Street Celebration and the innovative Café Conversations, and a straw bale house, designed and built by John Preston and Carol Hunter from Transition Downham Market and Villages.

Transition has its foundation in permaculture and natural building. The upcoming The Transition Companion was inspired by the seminal text on environmental architecture, A Pattern Language by Christopher Alexander. Many Transitioners dream of cobhouses and passive houses set amongst forest gardens and friendly communities. And yet we live within old walls, constricted by planning laws, by expensive green technology and by a lack of skills in the basic arts of living. How do people work with those constrictions and yet make steps to live within their principles? I stepped out of my door to find out: 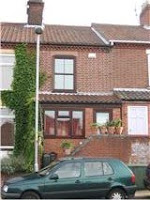 House on the edge of Mousehold Heath

Brought up in an airy 1930s suburban house in Los Angeles and having just returned from India Stefi stepped into her 1900 NR3 terrace two-up two-downer and wanted immediately to bring space and light into its narrow and dark British dimensions (it is 9 foot wide). She was influenced by two streams, she said. One was an aesthetic made of the space and light she inherited from her native California and the simplicity she found living in an Indian one-room dwelling open to the elements. The second stream to do with ecological living and energy reduction. 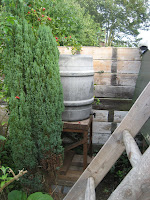 Inside the rooms have wooden floorboards and bare plastered walls and simple furniture ("primarily sourced from the rich pickings of Magdalen Street's dozen or more charity and antique shops! So the embodied carbon is very low"). Light has been introduced by opening up a skylight in the kitchen, making a glass front door and a device known as a solar tunnel which amplifies and bounces light into the recesses of the dark back bedroom.

“The sun tunnel costs £200 to buy, £150 to have fitted. but could be done DIY - it's an easier fit than a roof window. Even situated on a north facing roof, there is no longer any need to put on the lights in the room during the day. You need to figure out a way to shade it on summer evenings or you'll have daylight coming in until 11 pm and again at 4 am!" 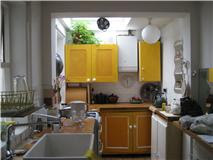 Meanwhile the double-glazed K glass fronted door (£150) and large window bring both light and solar passive heat to the front room, along with its underfloor insulation (£600). The woodburner in the “winter” back room uses wood from her pollarded sycamore tree:

“While warming the rooms, I also warm water and put it in a thermos for the next morning's tea (just needs a few degrees heat up in the kettle). I can also pre-cook pulses and rice for a super-fast finish off in the pressure cooker.”

Her energy bills have fallen dramatically as a result of these steps. Inspired by Chris Hull’s model she has also installed a rainwater loo outside and is presently constructing a Japanese-style handbasin where the grey water feeds into the cistern, meaning there will be enough water in the drought times without having to use mains water. Further into the narrow, immensely long garden rainwater feeds the pond and this summer at her birthday party people brought succulents for a new sedum roof. 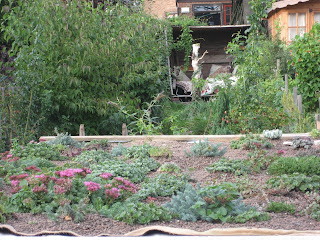 “This helps insulate the outhouse, improves the view over the garden, preserves the tar roof which would otherwise slowly breakdown under UV exposure. It also adds to the biodiversity of the long terraced garden, which borders on Mousehold heath and hosts many of its flora and fauna.”

The undercover materials include a recycled woollen blanket and a quality pond liner. Some things you just can't skimp on. 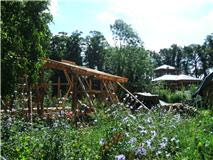 House in the Quarry

I met John and Carol at the Greenpeace Fair where they had just finished a set on the cycle-powered stage. John and Carol sing a sharp-witted contemporary slack rock as The John Preston Tribute Band. They are also about to finish building a straw bale house after five years hard labour. The last layers of the cob floor are being laid this week and with luck (and warm weather) they are finally moving out of their caravan and into the studio with its wood-fired stove, living roof and hand-made, hand-plastered walls, surrounded by a permaculture garden.

The derelict land John bought was in an old chalk quarry that housed a neglected but mature walnut orchard. Originally they designed and planned to build a house and a studio but soon learned that more space means more time and more money.

"Where this fits with Transition is that all these are learnable skills," John told me as we riff about busting through the mystique of the professional builder and not living in house “where the woman is trapped in a kitchen and a stupid room dominated by a TV set.”

“Oh, I thought you were a builder,” I say, dead impressed, it has to be said, by anything to do with DIY.

“I have an O level in Woodwork and Technical drawing, “ he corrects me, “And a degree in Music. I’m a music therapist. I didn't even have any interest in DIY before this misadventure.. Building is all about confidence and getting intimate with the materials. You can learn to lay bricks in a straight line, but you just won’t do it as fast as a bricklayer."

The skills to do with constructing your own house are many, not least dealing with planning permission and building regulations, along with learning about U-values and how to make your own paint (lime, borax, casein, natural pigments). What has stood them in good stead is instinct and persistence. For example where other houses built on this historical backfill of chalk have brought in massive machinery to build expensive high-impact concrete piles as foundation, John and Carol put in a simple low-impact trench (for £1500). They took a risk it would pass the geological tests. 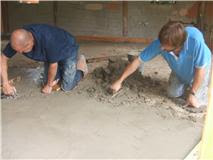 “It’s scary building because you have to spend money. And you have to undo things if you want lovely results.”

"And you don't have the same level of energy when you are in your early 50s," added Carol ruefully and laughed. 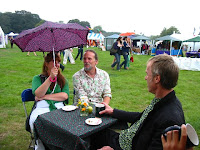 John and Carol have deliberately worked alongside people who were prepared to teach them – from green build designers to plumbers. (“The work will show you the way” as one Polish builder told them). Everything in the house has been installed with peak oil and carbon emissions in mind, which is how we ended up sitting in the rain discussing oil-based insulation materials and sourcing ecologically-sound door frames from Estonia, while everyone else was in the tea tent eating cake. Ah, Transition!