Today is the start of the national Social Reporting Project – an experiment in Transition communications that is set to run throughout the autumn. Yesterday I wrote an editor’s introduction on our new blog on the Transition Network site and each day over the next fortnight each of the 12 bloggers taking part will introduce themselves and their initiatives. Thereafter we have guest editors who will write on a chosen topic and set the theme for the following weeks. Peter Lipman (chair of the Network) is kicking off October, writing on The Big Picture, Sophy Banks (Transition Training) November, with a post on Inner Transition.

Before the project began I wanted to meet as many of the Social Reporters as I could. So during September I’ve had long conversations with people on the phone and jumped on a lot of trains. Some of our communications are about practical things to do with uploading copy, deadlines, word count and all the technical stuff you need to know about writing a blog. But mostly it was to connect with the individuals taking part and the places where they live. 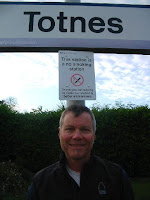 What struck me, as I met everyone in the West, in their local cafes and around their kitchen tables, as I spoke with Teen about community woodlands in the Highlands of Scotland and set up a meeting with Jo at the community plant nursery in Finsbury Park, was that even though the language of Transition and the national culture is a shared thing, the places in which we do Transition are very different. The territory shapes it entirely. Not just whether you are in a market town or bio-region or city, but what makes up the configuration of that settlement, the land that surrounds it, the feel of a place, the history of its neighbourhoods, the spirit that inhabits the streets and hills.
How, for example, the experience of conflict in Northern Ireland has created a conflict-free initiative in Omagh, how the political history of the North has formed strong livelihoods (and anti-cuts) projects and connections with other progressive groups in Lancaster, how the campaign to prevent a third runway provided the strong community backing for Transition Heathrow. How for example Ann in Wales can buy community compost for her market garden with no difficulty, but Rachel in Dursley struggles with neighbours to set up a composting scheme on her new estate. How Jay who comes from San Francisco sees the very English town of Totnes, and how Kerry, moving from an established initiative in Norwich experiences a new Transition University in Glasgow. 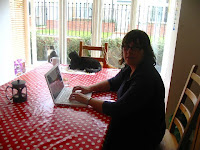 All these subtle differences, flavours and diversity are what an editorial platform can provide space and time for. On a blog you can feedback experiences that are impossible to express in a meeting. You can celebrate events and the people you work alongside with in a way the slickest marketing can never do. In a world addicted to busyness the ability to look back and value what we all do is often missing. Pressure from “real world” commitments can push our efforts out of sight, even though many of us feel that the big issues of peak oil and climate change, building connections and relocalising our communities are the most pressing things we need to engage in.
Our intent behind the Project is to provide a friendly and intelligent space for this reflection and appraisal, where we can pay attention to all things great and small, from the greatest metaphysical questions to the humblest vegetable on the allotment. And also a place where we can meet as Transition communicators, even though we might not know each other. To link up and show the pattern of Transition culture across the country - what it looks like, sounds like, feels like. All those invisible connections that make us a resilient people. What the future might hold if we can walk down the mountain together. 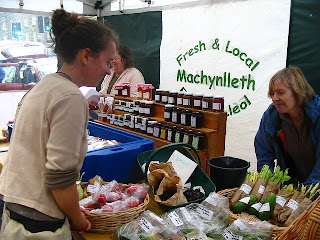 Communications feedback is also the principle behind these Transition Themes Weeks we began last year on This Low Carbon Life. As Social Reporters everyone writes as themselves, but they also write on behalf of their initiatives. During these theme weeks, we write on behalf of our groups, giving a glimpse of what is happening around the city for those who might not otherwise know.

So here are the participants in our Eighth (and a half) Week: Simeon on the Economics and Livelihoods’ community exercise, Chris on the run-up to the Magdalen Street Celebration, Elena on the harvest at Norwich FarmShare, Jo on raw food in the Low Carbon Cookbook and Jon on Norwich Community Bees’ first colony. Next week our Outreach section will also feature Andrew Boswell on the Northern Distributor Road campaign and Jeremy Bartlett on a new Urban Green Spaces project. All welcome!
From Transition Themes Week #8