Putting Ourselves on the Line

This column is usually reflective of world events. We talk about the big subjects – Libya, the London riots, nuclear fallout in Japan, global peak oil and environmental degradation - but we also record the stories we come across as citizen journalists, as activists and writers within an international progressive culture.

We do this is because amongst the constant chatter of daily news and the distraction of entertainment the smaller and more radical stories are not told or given proper focus. Because we don’t see them or read about them, because they are not highlighted and given weight by professional commentators people think these stories do not exist. Or they don’t matter.

Whereas in fact they are key.

Today I want to highlight three of these stories you might not read about in the mainstream media. Because as every storyteller knows, it’s the listeners that make the story come alive. It’s paying attention to what is being said and making connections that makes the subjects of these stories enter the consciousness of the collective and change the course of history.

On the Dark Mountain
I am at the Uncivilisation Festival on the Hamphire downs. It’s the last event of the weekend. Jay Griffiths, author of Wild, is introducing Benny Wenda An independence leader from West Papua. Like most people in Britian I know nothing about the genocide in West Papua (though I did once watch a three hour documentary on East Timor and the Western media by Noam Chomsky). We have just watched a film made in this country that has been occupied since 1962. Benny Wenda in a headdress of bird feathers sings his Cry for Help, a song for the 250 tribes now being exterminated by the Indonesian armed forces, as Rio Tinto and BP ravage his ancestral mountain. He sings for the earth, for the soil, for the birds of paradise we are all losing.

“I lead my people with a tear,” he says. 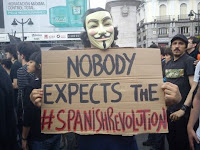 Standing in the Square
I am at the Transition Conference in Liverpool. Last year the financial commentor, Nicole Foss was the breaking news. Her analysis of spiralling house prices in a devolved economic future sent everyone into a crisis. This year the key words are calm, focused, mature. Everyone is discussing collaborative methods of powerdown and community action. On Sunday night however while most people are enjoying an open mic session, activists from Transition Barcelona were showing videos of uprisings that have been taking place in the main square. How thousands of people in response to the financial and political crises of the time met and started to discuss a different way of doing things.
When the police forced the people out of the Plaza Catalunya the spirit of what had taken place went into 23 neighbourhoods in the city. People came together to prevent the police evicting their neighbours (thousands of homes have been repossessed by the banks). Groups went into the countryside and took the news of what was happening which had not been reported by the mass media. Indignados are walking now through Spain, going from village to village telling the story and also to the EU government in Brussels. It is estimated that 10 percent of the country has been involved in this “real democracy” movement.

Against the Wall
I am at home in Suffolk skimming tweetdeck. Lists of tweets flash by like so many newspaper headlines. It’s the holiday season and the feeds are quieter than normal, but here is one story that keeps grabbing my attention. A civil disobedience action now in its last day of action in front of the White House. The heads of the largest environmental organizations are calling for the President to block the Keystone XL oil pipeline, planned to run from the tar sands of Alberta to the Gulf of Mexico, citing dangers to climate, the risks of disastrous spills and leaks, and the economic damage that comes from continued dependence on fossil fuel.
Over the two-week sit-in 1,252 people have been arrested, including top climate scientists, landowners from Texas and Nebraska, former Obama for America staffers, First Nations leaders from Canada, and individuals including Bill McKibben, former White House official Gus Speth, NASA scientist Dr. James Hansen, actor Daryl Hannah, filmmaker Josh Fox, and author Naomi Klein. 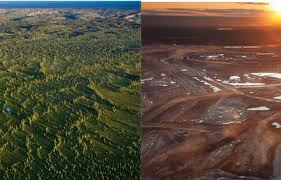 “On an issue as complicated as climate, there will often be disagreements over tactics and goal” said McKibben, one of the organizers of the protests for tarsandsaction.org. “But there are some projects so obviously dangerous that they unify everyone, and the Keystone XL pipeline is the best example yet.”

This is not the only action taking place in a nation that seems so rigid and militaristic that protest appears impossible. On the 17th of September, 20,000 nonviolent civilians will swarm Wall Street and set up an indefinite occupation - complete with free kitchens and doctors, tents and communal childcare - until their demand for real democracy is met. Inspired by the radicalism of Tahrir Square and Plaza Cataluna, the aim of #OCCUPYWALLSTREET is to save democracy “from the combined threats of plutocracy, oligarchy and corporatocracy. And with global climate change accelerating, there isn't a moment to lose.”

What connects these stories? We live in an institutionally separated world. Our media is highly selective, fuelled by base and reactive emotions. We are engineered to see news as discrete one-off events, whereas they are intimately connected with the fabric of the world and set within a deep framework of time and Empire.

There is a story about butterflies that is often told amongst people who campaign and put themselves on the line for a very different future. Here it is: when the caterpillar transforms into an imago it enters a state of complete dissolve within the cocoon. As it dissolves imaginal buds which create the new butterfly begin to emerge, which the immune system of the caterpillar violently resists. At the first attempt the buds are defeated. But at their second attempt the buds change their tactic. They are the same discrete units as before, but this time they start to connect with one another. It’s this combined network that holds out against the resistance of the old and brings the new form into being. What links the buds is communication.

That’s why the story goes both ways. 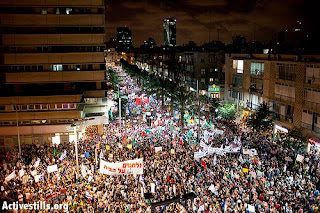 Photos: Forgotten Bird of Paradise, 2009; placard in Barcelona, May 2011; sit-in outside the White House, August 2011; tar sands in Alberta before and after; on-going demonstrations for social justice in Tel-Aviv

ONE WORLD EVENT! New film and discussion evening Little g presents the documentary, The Shock Doctrine by Naomi Klein on 16 September at the Friends Meeting House, 6pm. All welcome.
Posted by Charlotte Du Cann at 17:58