The Writing on the Wall

The future is fraternal John Berger (Hold Everything Dear)

Last night I went to a meeting about the Dark Mountain Project in Norwich. This literary and intellectual movement revolves around a manifesto written by ex-journalists, Paul Kingsnorth (The Guardian) and Dougald Hine (BBC) who, like many writers, artists and contemporary thinkers have "stopped believing in the stories our civilisation tells itself".
In response people are gathering in order to create a new cultural narrative. As Paul Kingsnorth explains in a recent interview in The Ecologist:

We’re an open space in which people can gather when they stop pretending that everything will be all right – that the world can be ‘saved’, that climate change can be stopped, that governments will start being nice if we shout at them loudly enough, that the world will change for the better through the sheer force of rational argument, that all the trends which are currently converging towards collapse will be magicked away if we work hard enough. Once you feel ready to step into that space, we ask people to look honestly at the way the world is, and where it is going, and to respond to that culturally and creatively.’ 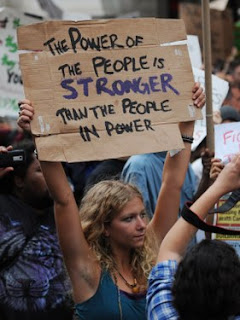 What is clear is that a space is being opened up, a vacancy in which a different configuration of people, thoughts and ideas can come together, a state in which the old dominant paradigm can be dissolved and a new one created.

On the streets of cities this is the #occupy the world movement. Inspired by the social uprisings that began in Tahrir Square in the Arab Spring of this year and later in the indignado movements in Greece and Spain, the #occupywallstreet campaign that began on September 17 is a direct reflection of this kind of cultural alchemy. It's a protest against the existing order but it's also a creative process in which the voices and feelings of ordinary people converge in order to find a way of expressing and manifesting social change. Real democracy and real solutions to our living on a planet in a state of crisis.
At present the prevailing "official" culture is rooted in a Western business-as-usual view of the world, that denies rather than reflects systemic collapse. However the structures on which this culture is based, the myths of endless growth and that special "celebrity" people (1%) have the right to rule and possess great riches, is being eroded as people throughout the world (99%) are waking up to the reality that words belong to everyone and that we need a new story that includes us all. 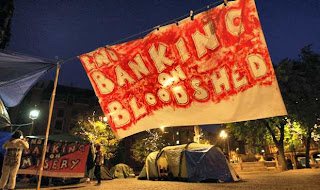 To criticise these occupations for not having a clear political agenda is to miss the point. Creativity has to allow a certain period of flux and uncertainty, where new forms appear unexpectedly, that don't fit the known or make sense, that appear random and most of all don't obey the existing rules.

You could observe that the #occupy events in New York and cities elsewhere are gimmicky, short lived, or not properly organised, but these leaderless, non-violent gatherings are key in that they focus fearless attention on what is described as "an entity of tremendous power which the mass of people resent and fear: the financial industry". They have also highlighted the extent to which the police will violently defend the existing story (women kettled and pepper sprayed, independent journalists arrested for filming) and the mainstream media are reluctant to relay a new one:

As a result people are now starting to realise just how corrupt and unfair the system is, and are choosing to join the movement which is sweeping across America (70 occupations in different cities and towns in the USA and several cities in the UK). Trade unions and other progressive organisations have teamed up in support and the numbers of people taking to the streets and campaigning online is increasing.
Meanwhile back at the neighbourhood pub in Norwich we discussed how we might go forward as a group of students, thinkers, artists, clowns, writers and community activists. We're going to organise an event in the Spring, write a journal, start creating a culture that does not just reflect the status quo bolstered by historical precedent. But first we are going to meet in an open space and see what happens when we come together.
Because the future is an ensemble act. 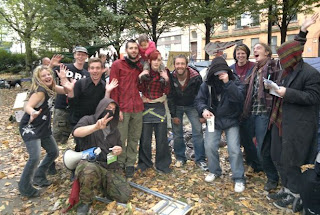 OCCUPY NORWICH Occupy Norwich is inspired by Occupy Wall Street, a leaderless resistance movement with people of many colors, genders, abilities and political persuasions. The one thing we all have in common is that We Are The 99% that will no longer tolerate the greed and corruption of the 1%.

Come on down on to the Haymarket on October 15th from 2pm. bring your placards, bring food and drink and warm clothing if you intend to stay. We don’t know how long this will last, but the first step is to get ourselves down there together, talk and plan, make friends, reconnect with our local community, and make it OURS!

UPDATE! (via @NaomiKlein)"After cops raided #occupysf and tossed their stuff in the dump, garbage workers returned it to the protesters, saying "we r 99 % too, And in NYC, transit workers say they don't want to drive the paddy wagons taking protestors to jail, because they too are the 99 %"

Photos from occupywallstreet and occupymanchester.
Posted by Charlotte Du Cann at 17:56