The Yurt and the Labyrinth - Transition Camp 2011

It has been a year of gatherings, each one different from the last. Although many have taken place in the countryside, this was the first one I had gone to that paid full attention to nature. The 2011 Transition Camp was not defined by its music or intellectual debate, but by our presence on the land, the chalk and clay pastures and woodlands of Sussex.

The Camp is held each October on a farm that once grew strawberries. When the English soft fruit growers co-operative was broken up by the supermarkets Waspbourne Manor Farm became the Wowo camping site and a centre for bio-diversity. For the last three years it has also hosted the South East Transition gathering in one of its main fields, organised by Mike Grenville of TT Forest Row.

The yurt was in a hornbeam grove by a stream edged by Himalayan balsam that at night was full of owls. Inside it was felted and had a skylight so you could see the trees moving. We slept on futons and a wood burning stove kept us warm. It was the kind of space you could live in for ever and happily forgo electricity and running water. It was also one of the spaces where the weekend talks were held.

The talks ranged from Sacred Baking to Fracking in the UK. Mike talked on Navigating Community Chaos. Adrienne talked about Natural Beekeeping. I talked about Big Picture Thinking and Medicine Plants. Summing up a discussion on Inner Transition, druid Philip Carr-Gomm warned us about the demons that can lurk in people's dreams for the future and cited the back-to-nature movements in Germany in the 19th and 20th centuries that become the dark history of Europe. Though the local Sussex downland TT initiatives seem gentler and more spiritually-based than our rough and ready big sky East Anglian ones, I didn’t encounter idealism. Something else far more earthy was going on.

In 2011 most of us are not thinking about a well-ordered 20 year Transition Timeline, but what will happen now when our industrialised system begins to crack economically and environmentally. Maybe three years ago we experienced a youthful burst of enthusiasm, but for most of us those demons appeared pretty quickly in the form of difficult meetings with our fellow Transitioners. Co-organiser Martin from Brighton (an initiative that had its fair share of demon struggles) did hold a fireside circle on How Is Your Transition Journey? but the main engagements of the weekend did not centre around our initiatives or communities, but on rediscovering an archaic and resilient way of being together. 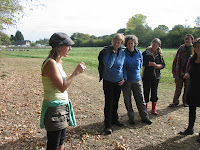 Was this an escape from reality, or was it the reality? Giving the talk on plants I realised that finding a real connection with the planet, the lightness and intelligence it brings, is as important right now as keying into the #occupy movement or Keystone Pipeline protest, knowing about melting ice caps or organising community projects.

Civilisation with its problems is set within the bigger reality of the planet and so long as we do not indulge in fancies or the kind of individualism that Mark was talking about yesterday, we can connect with this reality with our physical bodies and our imaginations as well as with everyone in the world who is doing the same work. We just have to make the time. 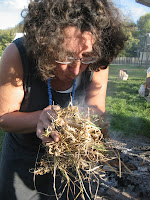 I read The Haw Lantern by Seamus Heaney. The hawthorn berry is the lantern carried by Diogenes, the cynic philosopher who walked around at the beginning of Athenian civilisation, peering into people’s faces looking for an authentic human being. To find the the real person in ourselves and to meet as The People requires a kind of scrutiny, an inner work that many of us have been conducting through the years. It also requires gathering in certain configurations in order that we recognise one another, to know we are not alone, that we hold the ancestral flame for the future inside ourselves as a group.

The weekend was opened and closed by gatherings organised by Rebecca from Transition Crouch End. We hung wooden discs on the tree of the weekend, the elder, made clay figures, held hands and walked in spirals as we sang songs. The children ran round the hay labyrinth and at night it was lit by candles. The communal camp was held in a circle of wooden stakes around a field kitchen, meeting tents and several fires. And there was something about these shapes, these circles of people, these felted enclosures, the tin washing and eating bowls, the soup on the fire, the clay oven that cohered us in a way that our separating straight-lined, square-boxed, pixel-formed modern world does not. 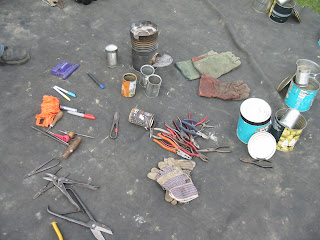 One of the main principles of the camp is about sharing knowledge. Not in an entertainment or arts-and-craftsy way, but because we will need these skills for the future - skills that range from making bread and felt to singing together and teaching bush craft to children. I found out how to make acorn flour by storing the nuts for two months, shelling and crushing them and leaching the tannin with several soaks of cold water. I made a rocket stove from two large and three small tins. I learned that you need at least 20 cross-pollinated plants for their seeds in any variety to maintain populations. And when we looked through the telescopes at the night sky and saw stripey Jupiter’s bright moons and the craters of our moon I felt the earth was not alone and nor were we in our struggles to keep life going here in a way that we in all in our hearts wish for.

But most of all I found out that when push comes to shove extraordinary things come out of people. I know that because when I gave my talks I didn’t have any time to prepare. Or rather most of the stuff I was thinking about on the train became irrelevant when I arrived on site and began to talk with everyone. I collected some plants and remembered some ways of paying attention I had found in an earth dreaming practice I explored with Mark years ago. Then when the time came I looked at everyone in the dark warm interior of the yurt, opened my mouth and told my story. 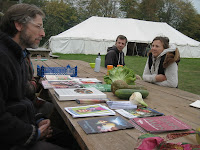 I read Old Man by Edward Thomas. It’s a visionary poem about the southernwood bush. Thomas wrote it as he observed his 4 year old daughter in the garden just before he went back to the trenches for the last time. I passed round a sprig of the feathery bush and its relative, common wormwood, and asked everyone to guess what strong fragrant plants they held in their hands. Like most sunflowers wormwoods are a bitter medicine and they famously token the end of civilisation (their Latin name absinthium meaning against sweetness). The bitterness of reality that counteracts the decadence of the pleasure-dome.

Mike who also co-ordinated the camp as well as the programme (brilliantly) told me that holding it on the edge of autumn brought home the realities of living without fossil fuel. And it’s true, immediately you arrive your focus turns to shelter, warmth, food and making contact with your fellows. It’s small too (100 people) which gives you enough time to talk with just about everyone without suffering festival stress-syndrome, the anxious feeling that the great workshop/party/talk/encounter is happening in the next field and you will never have the Right Experience or make the Perfect Contact. 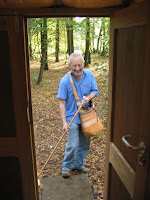 “It would be great if the Transition Conference could be held in a camp,” I said to Mike as we looked at the double rainbow appearing above our heads.
“Most people don’t want to camp,” said Mike.
“Maybe we all need to learn how to,” I replied.

I can say this because I was 55 before I went to a festival. Thanks to Transition I learned the beauty of sleeping in a tent outdoors, working in a field kitchen, meeting strangers round a fire. I learned that you can hold a dandelion plant in your hand and speak about its extraordinary bitter-leaved equalising medicine that frees up all the cramped and crystallised spaces inside. How it liberates knowledge and happiness from places you never imagined were there. How it can make everyone laugh and dance and feel the irrepressible sense of being alive, that force that pushes wild nature through the pavements of cities and well-behaved gardens everywhere.

And so Transitioners everywhere if you want to share the experience, you know where to come and where you are welcome. See you in 2012! 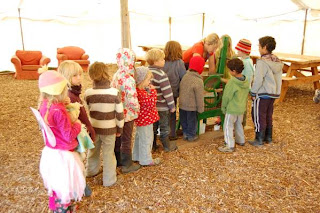 Photos by Mike Grenville and CDC: Labyrinth; the yurt and talk on Herbs for Resilience; Milly Hawkins talking about foraging for acorns; tools for making rocket stoves with Louise Smith; Martin Grinch biodynamic seed collector talking about gathering veg seeds: Mike in yurt doorway sweeping up at the end of the weekend; children queuing up to try the apple press with Fran the cook.
Posted by Charlotte Du Cann at 13:26