"The question I want to ask is: do we have a National Store?" asked Lady Cranbrook. "That’s one question I can answer," Lord Deben laughed. "No, there isn't one." (from Reclaiming the Field)

I am not by nature a squirrel. I don’t get a big feeling for hoarding or collecting stuff (though I do, like many coastline dwellers, have a habit of pocketing stones and quirky things from the beach). And yet this is the time when it is smart to be thinking ahead and stocking up with summer's abundance. Some wise Transitioners have been at this for months: plaiting onions, bottling raspberries, cooking up vats of green tomato chutney and damson jam, drying rosehips and borlotti beans. Along their hallways and windowsills sit pumpkins of various colours and sizes, seeds carefully collected in a drawer, dried herbs and chillies swinging from the ceiling. 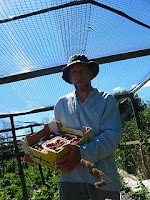 In TN's Low Carbon Cookbook discussions the Resilent Larder is a prime focus. Some of us cottage-dwellers are lucky to have this key cool space, others find chests-of-drawers in garden sheds, extra cupboard space in their downshift kitchens, drawers under beds. We don't depend on huge freezers to store glut produce, but find out ways of keeping things that can be bottled and dried for the winter months.

The modern industrial world lives and eats at a just-in-time delivery pace. In cities and towns people can dash out anytime to supermarkets where fridges hum perpetually and everything is kept wrapped and irradiated and gassed, chock full of palm oil and preservatives so it won’t spoil. Winter and summer are identical when you can ship produce from anywhere in the world. You can eat strawberries and French beans anytime of the year.

But to eat seasonally, locally, ethically, with an eye to peak oil and carbon reduction you have to rediscover how to store up your treasures on earth: find out for example that strawberries are not here forever, that they appear deliciously for these hot midsummer weeks only. And those greengages that are dripping from the tree in July and buzzing with wasps will glisten like gold and taste like manna on a cold January day. So you learn things your grandmother should have taught you: how to make jam, how to store apples, how to make sauerkraut and quince paste, what to do with chestnuts. You learn to appreciate what you have now, and keep some for later. Just like life. 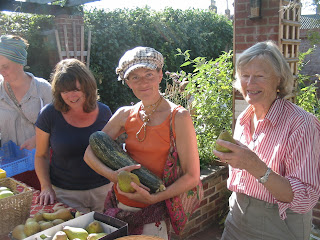 It’s a whole different relationship with the world. Brought up in a city neighbourhood of delicatessens and street markets I learned to cook supper with stuff I picked up on the way home from work. I am a grazer and gleaner by nature, an opportunist who loves surprises. Ah, that looks good. Now when I look at my larder I can see the resilience factor at work in spite of myself. We are not as well-stocked as Nick, who turns everything into his garden into a pickle or wine, or as thorough as Graham and Nicky Eliott who teach classes on preserving in their organic smallholding in the Waveney Valley (last one on November 5). 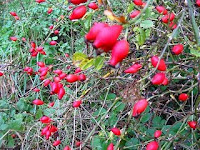 But you can chart that shift. It’s packed to the gunnels: shelves of wild cherry, sea buckthorn and marigold tincture, dried elderberries and lemon balm leaves, beetroot relish and blackcurrant jam, on the floor sit two sacks of potatoes (Marion's and Malcolm’s) and several trays of apples (from our Abundance tables at Sustainable Bungay) alongside sacks of millet and rice flakes and sweet jars of rice and beans (from Suma wholefood group). Outside there’s another cupboard of freegan groceries and a cache of acorns on the table I hope to turn into seriously survivalist flour with a recipe from Milly at the Transition Camp. A dormouse would be happy. 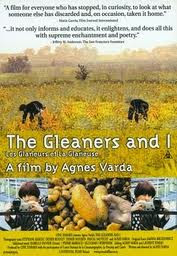 This week on the blog in celebration of Autumn we are sharing our tips and thoughts about the cheerful and resilient storing of food: harvesting and preserving, showing neat ways to keep native fruit and prepare dishes from seasonal veg by a Transition crew of growers and cooks. Some of this food is from our veg boxes, roadside stalls and gardens, others from our wild neighbourhoods. As the storm gathers outside we’re learning new attitudes to old ways, scouring our nearby hedgerows, collecting fruit from city trees. Learning to relish what we have and not let harvests rot or go to waste.

In October's Transition Newsletter the post that had twice as many clicks than any other was Who is Storing Now? by Eric Curren. It's the initial piece in the series The Happy Hoarder on Transition Voice that advised learning from the experts - from survivalist dried food producers to Mormons to US Transition groups like Grand Ronde Transition in Oregon who shot this video on three month food storage. On the Energy Bulletin amongst articles on peak oil and the #occupy movement an ex-newspaper editor from St Louis now living in Ireland makes hawthorn wine and jelly and reflects on old and modern ways of collecting food:

When we do things like this, we act as modern gleaners, the subculture of people who gathered the waste left behind after the harvest. Gleaners held an accepted place in most cultures, gathering grains in fields or rubbish in cities

Stand behind a restaurant or supermarket at night, or look at berry bushes or weed fringes in season, and you might see our gleaners at work – freegans, greens, preppers and itinerants of all kinds. They wear your old clothes, fix your old toaster, and eat the pre-sliced carrots that the supermarket keeps under plastic and argon. If we have resource shortages and mountains of rubbish outside our cities, it is because we don’t have more of them. 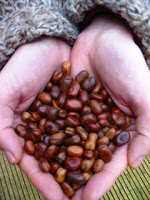 Time to get those bottles out.

Photos: Halloween pumpkin heads; with Daphne, Lesley and Eloise at the Sustainable Bungay Autumn Produce Swap at the Library Community Garden; local rosehips; poster from Agnes Varda's The Gleaners and I; dried field beans grown by William Hudson as part of TN's Beans, Oats and Bread project.
Posted by Charlotte Du Cann at 19:05