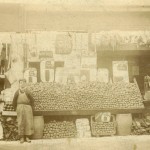 The Low Carbon Cookbook has been on the back burner for a while. First the Transition Free Press took us away from the stove (now out with great food pages edited by Tamzin Pinkerton). Then I was in bed with flu; then it was the festive season and everything in Transition came to a halt. So in the new year, I planned to report a cook-up with the Community Kitchen crew for our Happy Mondays Goes to Kerala January meal (with lovely squash curry and apple fritters).

But then it SNOWED.

Sometimes the greatest acts of invention come when you are faced with limited resources. As the year turned and the world was held in suspense, I went back to the kitchen and I realised I hadn't done much holiday prep. So, like all cooks when faced with a challenge, I went into the larder to see what I had forgotten, and might just turn into a dish.

Fist I found a bag of local wheat and spelt flour and discovered that flat breads from scratch - pittas and focaccias - are the easiest thing in the world to make. They went down a storm with Mark and Nick after hefty woodcutting, especially with sliced chillies from the conservatory and rosemary sprigs from the garden. Then I found a bag of dried chestnuts. Our foraged pile from local trees were toasted and eaten by the fire weeks ago, but Eloise, who comes from sweet chestnut country in France, said that people in her village boiled them up and made them into thyme-flavoured patties. So I mixed mine with parsnips and made a plate of sweet, rooty rissoles served alongside a sharp and tangy slaw (see below). Later, I bulked up a veg stew, and made a classic seasonal soup with sage, garlic and potatoes.

Another discovery was a packet of tiny chia seeds that Mark had originally sown to grow into massive blue-flowering plants. Chia is one the superfoods finding its way into uptown smoothies and granola. However it is a traditional famine food, and can be soaked in water overnight for a strong and sturdy blue porridge the next morning. I cooked mine up and it was a really tasty and warming breakfast with almond milk, pears and honey - somewhere between tapioca and amaranth.

finger on the pulse

But the new stars of the LC larder this winter are the East Anglian peas and beans produced by Hodmedod's. This month the new shapes of Kabuki peas and whole Victory fava beans have appeared on sale, to be followed in a couple of weeks by the wonderfully named, Black Badger peas, once a traditional street food:


Black badgers have been grown in Britain for at least 500 years – and older similar varieties of marl peas have been cultivated for centuries more. Variously known as maple peas, Carling peas, parched peas, black peas, black badgers and grey badgers, these peas are traditionally associated with the north of England where they are served ‘parched’ (cooked and then oven dried or soaked in vinegar) as a snack on bonfire night and as a Lenten dish eaten on Passion (Carling) Sunday.

Peas and beans have been the British staple food for centuries but since the advent of cheap factory meat and industrial processing, they have fallen from grace and from our supper tables. As we tucked into a great bean and parsnip soup, before editing the Bungay newsletter last week, Mark, Josiah and I talked about the folk stories around beans and peas (as well as the modern news stories in The Guardian and interview on Transition Culture). Josiah, who has taken the original Transition Norwich food project into a national arena, was saying how the fairy story was a parable for our times.

In the tale, the luckless Jack trades a cow for a handful of coloured beans. The milk cow is a symbol of prosperity, and beans one of poverty, so it seems a poor exchange. But this is an old initiation story in which the fool turns out to be wise. Jack takes a gamble and finds his treasure in the giant's kingdom, and the story has a happy ending.

"Maybe we should rename it 'Josiah and the Giant Beanstalk'," I said.

Maybe if will all let go of our addiction to meat and dairy products in favour of beans, we will all find our golden goose.

Beans are the wise staple of the downshift kitchen and its great to know you can buy local varieties when most come from Canada and China. I usually cook up a pot to have with rice or potatoes, and then turn in to soup the next day. You just need to add more stock and a handful of coriander or parsley leaves, finely chopped leek, any left-over veg, a big squeeze of lemon and hey presto! Lunch.

What all these rib-sticking peasant dishes call for however is a little lightness and zing. In summer this is typically a fresh tomato salsa, but in winter The Slaw comes into its own. The favourite side of our Low Carbon Cookbook bring-to-share meals, they are a dish where everyone's imagination can take root. Seasonal grated veg - beetroot, fennel, carrot, white and red cabbage, celery - is creatively and colourfully sprinkled with seeds, berries or currants (dried cranberries and pomegranates were new 2013 additions), livened with fresh citrus, umi plum seasoning, root ginger or perky shredded greens, sweetened with rose hip syrup or apples.

Here is one I put together at the recent Dark Mountain meet up at the Sustainability Centre kitchen in  Petersfield:

Grate the celeriac and pear and mix together in a bowl. Add other ingredients. If you can't get hold of a Seville orange, a blood orange and lemon is a good substitute.