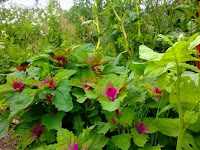 Midsummer 2013 and the new vegetable garden is flourishing. By the time the apples are ripe and the potatoes harvested this blog will be four years old. For three years we published posts daily along weekly themes with a crew of 8-12 people. Over time, as Transition Norwich shifted and changed its form, the team has dispersed and this year the blog has become occasional. This doesn't mean we are not still here doing stuff in our communities, living a low carbon life, just that our attention is not on writing blogs. Nor does it mean that you can't dip into our massive store of over a thousand posts, and find great and relevant gems there. Just check out our extensive topic list on the right hand column and have a good browse. It's an inspiring picture of what a downshifted future might look and feel and sound like.

Meanwhile I thought I'd write an update. Where have we gone? Well, Transition Norwich is now mainly focused on three areas, and most of our ex-bloggers can be found there: John Heaser and Erik in Transition Hethersett, one of TN's Transition Circles (mostly active in the west of the city), Chris and Elena busy at Norwich FarmShare, and Helen with organising the Magdalen-Augustine Celebration. Jon Curran meanwhile is writing for the Norwich Escalator programme, and Simeon, who was elected as a Green Party councillor in the recent May elections, is active in the network, Visions for Change; Mark, still tracking wild and medicinal plants, is organising the distribution for Transition Free Press during its pilot year, and putting his attention on Wellbeing (principally with TN's country cousin, Sustainable Bungay). 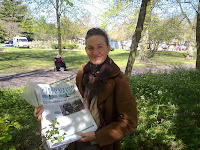 And me? Well I'm helping edit a book with Lucy Neal about Transition and the collaborative Arts, called Playing for Time - Making Art as if Life Matters. She has been coming down almost every week this summer and we have been working out of her caravan in the garden. Other days I have been editing Transition Free Press (now working on the third edition) and distributing books for the Dark Mountain Project.

After writing 74 blogs last year (!) I found myself stepping back from these keys as the year turned and letting myself go fallow. Recently I emerged from the clover and wrote a post on my own blog inspired by the cover for the new Dark Mountain book. It wasn't about food or community, or transition initiatives. It was about the visionary English artist, Samuel Palmer. It was about belonging.

When Transition Norwich unleashed almost five years ago, I sat down at the Arts, Culture and Wellbeing table and discussed with others how these subjects might influence the way we face a future without abundant resources and finances. It feels, after many explorations within Transition, mostly around communications and community activism, that I have come full circle. You might say I've come home. Maybe we all have. 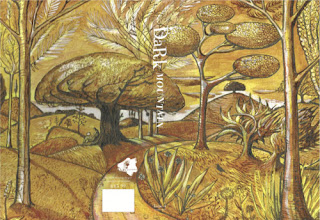 Rob Hopkins' new book, The Power of Just Doing Stuff, focuses almost entirely on practical projects and the revival of the High Street. It gives a clear simple picture of the Transition movement, as a way for local groups to come together and start community gardens, bakeries, energy projects and local currencies. But, for me, Transition has mostly been about a process, a going through: undergoing a radical restructuring of the self, to become an active agent within the collective, in order to live effectively in the future. To feel at home on the planet amongst my fellows.

As a writer it has meant witnessing and reporting on that process, and the cultural moves we need to make to downshift in our ordinary lives. Intellectually, pragmatically, emotionally, imaginatively. It has meant making meaning and giving value to this low-carbon life, learning to open out and become articulate about subjects that are "outside my skillset" from zero waste to high finance. And most of all it has meant learning to work in a group. This Low Carbon Life began all that for me, and perhaps for all of us on this journey. Looking back, though it worked beautifully as a collaborative project and produced some great posts, I don't think it entirely broke the tyranny of the silo, that position of individual control that is the bane of all social enterprises. Me did not entirely become We, the connected Self, one amongst the Many.

Some of that is due to this form of media, and some to our  strong social conditioning and history. Our fear of letting go and taking charge. Blogging is, by its nature, insular and subjective. And maybe that's why eventually we dispersed. We needed to break out into other areas. However I do feel that a lack of dynamic inner work and group interaction will reduce any initiative to just doing stuff within a conventional set and setting. Digging the garden, putting on community events, marketing ourselves. There is no harm in any of those things. But to see a different world into existence takes other skills: depth, rigour, perception, intuition, courage and light-heartedness. In that territory the artist and the writer is a pioneer. So, right now, that's where I am headed . . . . Have a great summer all!

Images:tree spinach in the garden; delivering copies of Transition Free Press to May Day Fair in Chapelfield Gardens; cover of new Dark Mountain collection by Kit Boyd: (you can pre-order a copy or subscribe for the year here); community garden in Transtion Portalegre, from The Power of Just Doing Stuff by Rob Hopkins (you can order a copy here)
Posted by Charlotte Du Cann at 18:58