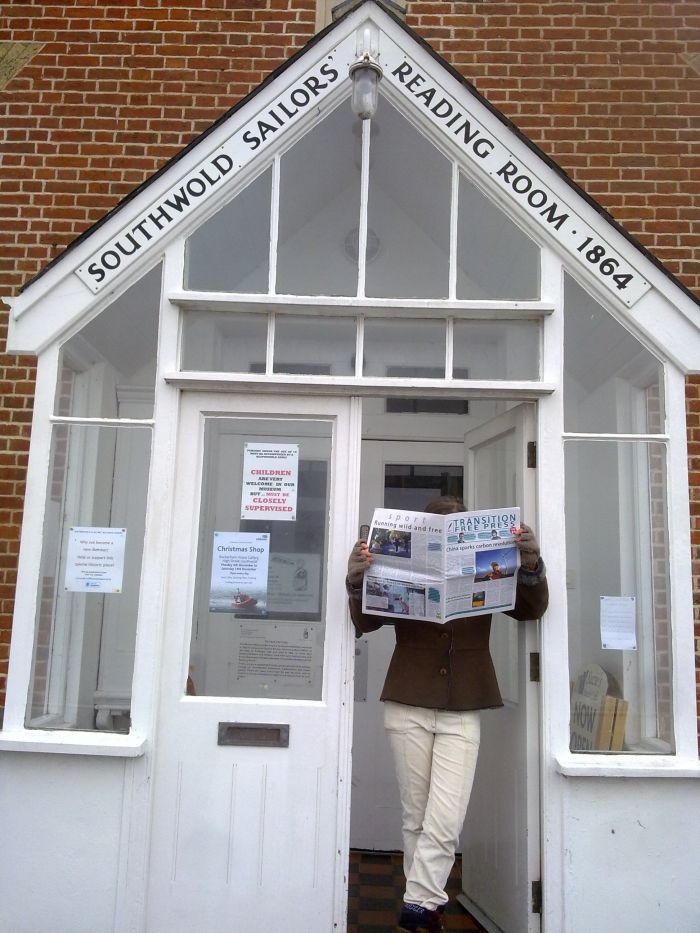 I should have started writing this an hour ago. I awoke in time, but I was listening to the world outside as darkness shifted into light. The stars drained from the sky, a vixen yipped, an owl called among the trees. It was silent for a while. Then it happened: a small sweet sound in the moment that Latin America calls the madrugada, the time just before dawn, and I knew it had begun. And there is such a feeling inside when you hear it, one bird singing after another, all calling out: Spring is coming, Spring is coming, I am here! Are you?

I wish I could convey in my human words the sound of the robin redbreast, as he starts up the chorus, the bird that sings through the night and through winter, against all odds and heralds the day. But you know, some things you have to experience for yourself.  What I can tell you is that soon the chaffinch and the wren will join him, and in March the blackbird too.

You see you think writing is a solitary thing but it isn't. If you sing in a choir, play ball, act in an ensemble, write, as I do for a small Transition newspaper, you know that being part of the chorus is everything.

we have to talk about comms
The dawn chorus is a song that has been going on for millions of years. It begins as the sun lights up different parts of the globe and it never stops. That's something I learned from an artist called Ansuman Biswas, whose project, Far Player is part of the book I'm editing about Transitional arts practice, Playing for Time - Making Art as if the World Mattered.

Voicing who we are and where we are in time is part of being human. For thousands of years artists and communicators have sung in the day, we've sung praises and lullabies, shared stories, and learned, through the art of writing, how to convey our thoughts and feelings across the globe. But equally as people we have been silenced. Our voices have been crushed and misshapen by a succession of Empires that have attempted to control us. Now, as we struggle within the modern vice of corporate-controlled media and marketing, many of us want to explore and voice another sound, another story. One of those stories is about the Transition movement, in essence how we, as a people and as a network, respond to the triple drivers of climate change, resource depletion and economic breakdown.

For this however, we need to talk about comms (as communications are referred to in modern organisations) because although human communication is a bio-diverse, multi-levelled exchange it is frequently treated as a monocultural one-way broadcast (I am getting my message across to Them). Sometimes it is presented as a dialogue (you can give your comments on My Message, or you can tell me how I should be communicating and I will incorporate your ideas).

But the fact is none of this is really communication: it is control of information, and you can't have communication and control in the same place. Communication is a subtle thing: you can say or write beautiful and intelligent words and yet if you have no fellow feeling, no desire to make contact, to connect, they fail utterly as communication. Likewise, if the people are not open to receive what you are saying, it also fails. Sometimes the lack of connection is because none of us really care. And sometimes that lack is due to the silo conditioning that we have all been brought up in.

For a long time, let's say almost four years, I wrote hundreds of blogs about Transition. I wrote them as part of this project which I started up and edited from 2011-2012 and as part of the Transition Norwich This Low Carbon Life community blog which ran for every day for three years. I've written news bulletins and press releases, a column for the Eastern Daily Press, a quarterly newsletter for my own TI, Sustainable Bungay, magazine articles, thousands of tweets. And all of this you could say was a way of communicating Transition. But nothing has got near to the project I am now part of, editing Transition Free Press. Because this is a publication in its own right: it is not part of a corporate strategy, or a mainstream business. It is pure editorial run by seasoned Transitioners, and in a time where the media is controlled every which way by government propaganda that is an extraordinary thing.

You can write deeply and passionately, as I found out, in a blog, but they all (including this one) only go one way: down the page. And so rather than go deeply and passionately into 'comms' and how it has or has not worked for me, I want to talk briefly about why I feel the paper reaches places other comms does not, and how writing can teach us how to live in a co-operative universe. Here are four small keys:

Latitude OK so the paper goes across, rather than down, and it is all in the same place, physically, in your hands at one time. You open at the News and end at Sport, and in between you flash past every subject Transition engages in: energy, grassroots democracy, alternative currency, CSAs, community arts, wellbeing, people, projects, plants, places . . .You can in the space of a few minutes flick through 24 pages and see what Transition means as a culture, a whole new way of living on the planet. It's a multi-voiced operation. It's a We thing. During the pilot over 100 contributors wrote stories, telling us about their projects, writing them from the field, from experience. Here I am! Here we are! 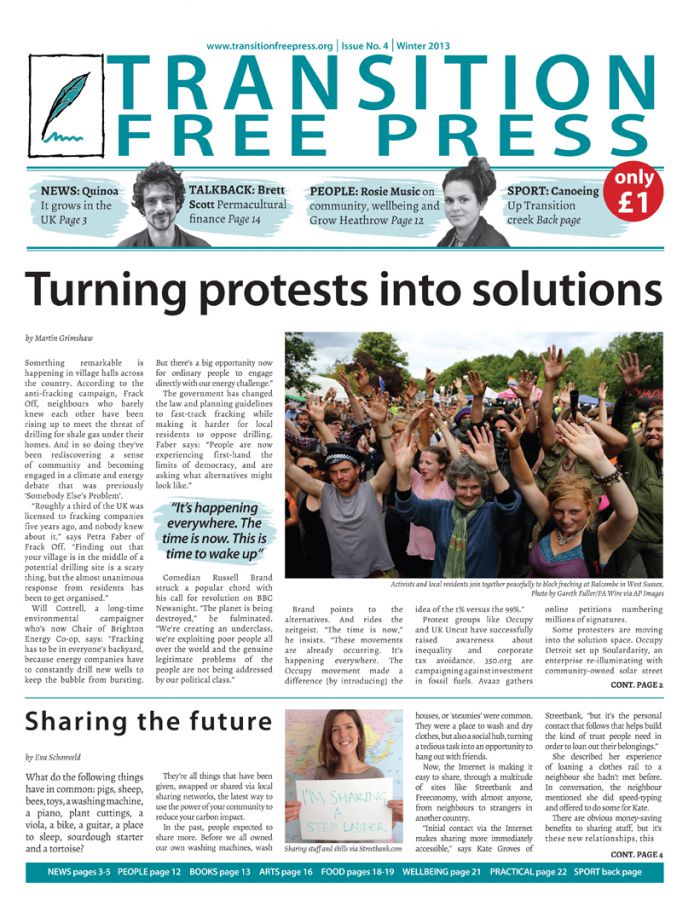 So Latitude means that in Transition you need to have all these subjects at your fingertips from the big picture to the small detail: you have to know about fracking and you have to know how to split logs. You're smart, practical, love the earth, work with your fellows, and most of all you love to listen and give value to other people's stories, as well as speak about your own. You might not know how to run an alternative currency in your own neighbourhood, but you know the people that do, you know how it works. You know that it matters.

Attitude You have to know the reader is not the enemy. The reader is someone you don't necessarily know, that you are happy to sit alongside with. You don't want to download your sorrows. If you are making a point, you learn to take it out. A lot of Transition comms can be quite evangelical, and as result non inclusive. My ecstactic moment of conversion. We are not preachers. We are writers and communicators. Writers know that the moment of inspiration lasts about one second. What matters is that you get up every morning and sing your song. You're part of that dawn chorus. I am always writing the same poem, as the poet Pablo Neruda once said, as he wrote in his house by the sea, in hiding on the run, as thousands of people stood in the stadium listening to him.

If you have got through the main struggles of Transition and are watching how the world is going you know we don't have time to carry on about our small grievances. What this person said or didn't say to us. We are writing in the face of vast opposition: a mega propaganda machine, and people - including our fellow Transitioners - who are trained to criticise every move we make toward creating a liberated and connected world. Neruda was facing the shock doctrine of Chile. The thrush, now singing outside, is facing the suburbanisation and industrialisation of the countryside. Six years on we're still singing. We're not going to stop. I'm always writing the same blog, the same editorial.

Rigour The word count on the paper is strict. On-line you can go on forever, but on TFP you stop at 500. It is also objective, particularly in the news section, so this is not your opinion about something (unless you are writing for our Talkback pages) this IS the something. Facts needs checking, quotes need finding, pictures need to be 300dpi and work as images. It needs to convey in that short space what you are talking about so that person you have been sitting next to can say to their neighbour or Transition group: hey have you heard about community hopgrowing, we could do that! and then 50 people start growing vines in their gardens and allotments (this is true by the way Farnham Hoppers grew out of a TFP story about a London hop project).

It's not time to be indulgent. It's time to listen to who else is singing in the neighbourhood.

Skillshare/Knowledge Share A big part of the paper is about sharing skills. If you want to break out of silo mentality, join in with your fellows and make yourself and your community/network resilient, you need to have a communicator on board. That means in yourself and also in your initiative. For me one of the best - and also most challenging parts - of TFP is reworking the copy with the contributors. Writing is a skill. You sometimes have a gift or a knack for it, and sometimes you have to learn it. Editing is the skill to shape and hone copy so that it works as an engaging piece of journalism, but also holds the essence of the culture we are conveying in every page: the art and beauty and intelligence of downshift. 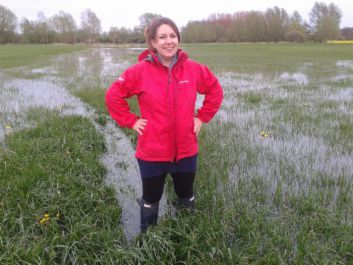 I could carry on writing, because you know the material is abundant. There are so many stories to tell, so many projects that show what bright thing can come out of darkness and a hard winter. I want to tell you about all the great people who are in this comms network: our distributors around the UK, our contributors around the world. 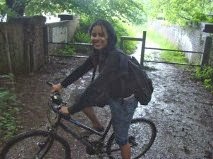 And I wanted to introduce you to all our new editors: Amy Hall (News Ed), Gareth Simkins (Energy), Michaela Woollatt (Assistant Features/Education), Tess Riley and Eva Schonveld (Food and Drink). But you know I can see the deadline coming. You only get a small margin to sing your song, and you can't be late. Others are waiting for their turn. You have to be on time, the earth has to keep spinning, we have to find our note. Spring has to come.

If you want to see how I feel comms best works in Transiton: have a look at our small resilient grassroots paper. Even better if you are a Transition initiative or social enterprise, a small business or low-carbon group, do become one of our distributors and sign up for bundle. Or, if you are not connected to an initiative, do become a subscriber. Because we can't do communications without each other, dear reader. And if you have a story, do get in touch. Whatever you do don't stop singing. Because, whatever it sounds like or feels like in the hour before dawn, we are listening. We are here.

This post was originally published on the Transition Network