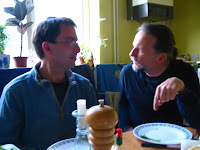 Scientists talk about climate change with studies on pollution and toxins where the Inuit discuss the effects as they occur within our lives. Our whole world is changing. On the topic of environment southerners focus on borders which prevents them from getting connected. When Inuit talk about environment we are one. (from Inuit Knowledge and Climate Change)

From 1998-2003 I ran a project with Mark called the Earth Dreaming Bank. It was an investigation into the relationship between the earth and human consciousness, specifically dreaming. One of the tools we used was called Five Levels which I had borrowed from the eco-psychologist, Stephen Aizeinstat. Aizenstat had returned from the Rio Earth Summit where dreaming had been recognised as an intrinsic part of human knowledge, our world heritage. I had met him after a talk he gave in Santa Barbara on Aboriginal Dreamtime.

The Five Levels explore night dreams from five different perspectives, asking how they relate to your waking life in the last 48 hours, in terms of your biography, as a social being, in the realms of world mythology and finally as a creature of the earth. In the practice with others the hardest level to account for was the third. To break out of that individual mindset and shift into the collective level was a difficult step, often hedged by unnamed fears. Mostly people didn't like to think of themselves as a member of society within a historical or political framework – as a woman, for example or a member of the working class, even of the human race at this point in time. They felt they no longer had a handle on their destiny somehow, which was not true of the other levels.

None of us liked to think of ourselves as being subservient to the heartless and autocratic system we were all part of. A number or statistic. Somehow dispensable. And yet within the dreaming an awareness of our position was often the most powerful point, the point at which radical change could take place, a moment of liberation.

Perhaps the strongest opportunity Transition offers is for a redefinition of that social level. Partly because it values working with other people on an equal and fair footing. And because it recognises that a reconnection with people is a vital step towards co-creating the kind of low-energy future we want to live in. No matter how strong our connection with the natural world, no matter how determined we are to break out of illusion and live a deliberate life, if we don't also connect in a meaningful way with the people in our neighbourhood and in our society we will indeed become dispensable, cogs in a machine that is already running out of control across the planet.

These are not necessarily the conversations you have across the supper table or on the bus. You need another set and setting to engage in them fully. Transition can provide an informal platform for such discussions because everything we do is within the deep frame of change. Most of all we're not addressing the effects of the 3 E's (energy, environment, economics) as experts, outside the problem, we're discussing them as players, inside the problem, as a People. 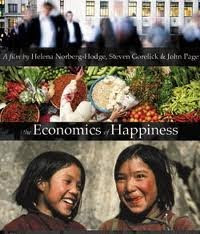 April 8 7.30pm Tom Abbot's Barn. The Saints. Suffolk. Our second Sustainable Bungay and Greenpeace film night. There are 20 people in the barn and we're watching the Economics of Happiness. It's a documentary about the effects of globalisation, principally on the people of Ladakh who once all lived in autonomous, self-sufficient and locally-orientated communities. The director Helena Norbert-Hodge poses ways we can combat the eight spokes of the global economic wheel that run from competition and conflict to false accounting, how we can engage in localisation and revitalising our own local communities. We're discussing what we can do here in East Anglia and the freestyle conversation is running from sharing stuff to permaculture. We need to shift our values, we agree, how do we begin? Richard riffs on farmers committing suicide and dogs undergoing hip surgery. "It's great we can count on you for keeping our spirits up", says Marion, champion of organic potato growing in the region, and we laugh.

Outside across the dark common the stars are burning and the new moon hangs in the sky. The blackthorn is shining. I'm collecting my Suma order from Kris's car and going to stay overnight with Netta in Beccles. The parlous rural transport situation means I can't get buses after teatime. "How are you going to get those sacks back?" she says, as I heave 30 kilos of millet and rice into the back. "Trolley them!" I laugh. En route she turns to me and says: why don't I just drive you home?

April 12, 6pm Aladdins cafe, Magdalen Street, Norwich. The cafe is unexpectedly full. 35 people are listening to Deepak giving a recap of Nicole Foss' presentation last month. As well as the main theme of runaway deflation, he mentions other subjects Foss touched upon after the event at Christine's, notably the restriction of our civil liberties. We've organised ourselves into five tables each with a question arising from the talk: Are we heading for inflation or deflation? What political actions can we take in order to save our society? How did we get into this situation, historically, philosophically? What actions can we take locally, as individuals and in community? 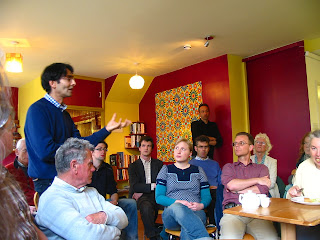 I've asked the question: How can we preserve our liberties and what are they? "We don't even know what our rights are," remarked a young midwife as she described how her time-honoured profession was being squeezed out. There is a large piece of paper in front of us and I'm writing a litany of our disappearing freedoms: EU directives on herbal products, the liberty of living in a mobile dwelling on your own land, habeus corpus, the rise of demi-gods, press freedom, press monopoly, collection of data. We're talking about breaking our own self-censorship, standing behind others as they act on our behalf, protesting. What feels important is that we are talking these things out loud. Because silence is consent. Afterwards we give a plenary of everything we discussed. Financial actions that we can take from starting our own currency in Norwich to shifting cash into ethical funds.

Unlike our laid-back country conversation, this city one is intense. While others continue in the pub afterwards, I head back to the station down the back lanes where the stone walls are green with shepherds purse and ivy-leaved toadflax and ancient cherry trees lean out of hidden gardens. I'm staying with Lesley tonight in Oulton Broad. En route to her house we walk through Bonds Meadow Wood and feel the presence of the huge willow trees shifting in the warm spring night. In her kitchen there's a meal waiting for me and a glass of wine. Red cabbage sprouts for the salad from a seed tray outside her door. 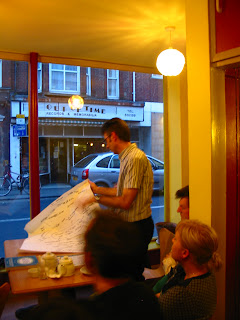 You don't expect to find flowers in a city street, and yet they are there. You don't expect to find kindness and generosity in people, yet it is there. I don't think we talked about those qualities in either of our discussions and yet it was everywhere, unsaid in the room. Hussein and Tariq who run the cafe kept it open for us past hours, so we could have this conversation. Tom opened his barn. When I can't get a bus, people open their houses, drive me home, offer me lifts. Last week I hitched to our local market town and 4 strangers picked me up. What do you do they ask, the builder, scrap metal dealer, visitor (from North Wales), artist (from East London). I'm in Transition I say and start telling them what that means.

The fact is we have to have the conversation. Whether that conversation is haphazard or highly structured, whether it's awkward or fluent, speaking to our neighbour or speaking to the room, we can't feel on our own. As the world darkens and tightens its grip we need to feel light and in charge of our destiny. "The big thing is control," said Deepak. "And what mitigates control is communication," I replied. We have to talk about how we feel and what we can do, how we can manifest a vision for the future that includes the earth, our skills, our intelligence, our common cause, our common freedoms. The institutions that hold us in their grip count on our being separated and afraid. In the dreams Mark and I once paid attention to so intently, the point of liberation came when we said how it felt to be trapped. When we spoke from our hearts the dream broke open. The autocratic world none of us wish for and all of us resist, counts on not saying what we really feel out loud. 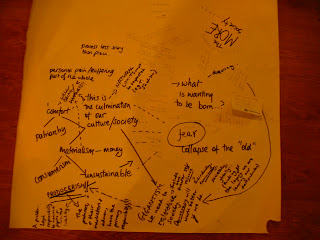