Everything must change - Transition Themes Week#14 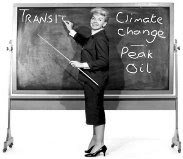 Welcome to our last Transition Themes Week #14. We've been running this blog daily for two and a half years now. We created it originally to reflect back to ourselves and the world what a low carbon life looks and feels like, to show the kind of people we were and explore Transition ideas, particularly the experiences we were then having in the Transition Circles.

The Transition Themes Weeks were begun to report on the work of TN's projects - energy, economics, food, bees, Low Carbon Cookbook, Magdalen Street Celebration. They were there to keep us all in touch and functioned like a network in a resilient eco-system, working to connect and feedback to the whole initiative and different affiliated groups in Norwich. They began on Mondays with an introduction to the week and a post about Transition communications, both in the city and within the Network.

Today some of the groups featured in these weeks have fallen away, people have come and gone from the blog. And though there is still a committed core of us, life is pulling us in other directions. Some people are too busy to write, others have stronger commitments, and this puts a strain on other bloggers to keep up the momentum. Weeks are becoming harder to fill, to get a full house of contributors. So after June 20, summer solstice and The Festival of Transition (and my birthday!) we will become a more occasional blog. We're each taking a day and posting when we can. Hope you will still continue to join us! 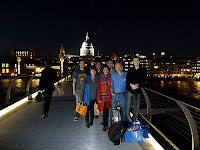 Some reflections on the editing business and Transition

So everything changes. That's something you learn for sure in Transition. You also learn to reflect and see how you might have done things differently - not had you known then, but if you were to start again now. Now I think I would think twice about creating editorial roles, and what this entails in grassroots communications. Communications have a low priority within Transition. It is something that is done by someone, and is useful insofar as it works as a marketing or recruiting tool. Even though in Anthony Sampson's analysis of power in Britain the media holds the second greatest ability to influence events (way beyond government), creating our own media and forging a new culture is not considered important.

So now I would get clear on how communications, specifically editorial, are regarded within the rest of the enterprise. Secondly, I would hesitate to take an editor's role, even though this has been crucial in setting up both our Norwich blogs (and also the Social Reporting Project and Transition Free Press).

In traditional journalism, nothing happens without the editor. They are the deciders, the ones who say yes, maybe, and no way Jose. Everyone has their role around this decision-making process. I've worked with some great editors. Some I got on with, and some I didn't. There's usually something you don't like about the editor. That's because a good editor cares about the edition, and not you. It's not personal, it's just how it goes. Everyone understands that. The editor's word is famously final.

In Transition no one understands that, because you are not working professionally, you are working out of conviction, or because it suits you. You are loyal to the main storyline only as far as it works for you personally. Most people join a Transition project, as a hobby or an adjunct to their normal lives. So as an editor you can't really operate very well. No one is getting paid, so you have to be nice to people or you get a blank page.

At first people in the initiative didn't want an editorial crew at all. We started the blog along trad lines with ex-professionals - with an editor, managing editor, sub-editor and designer - which proved really useful for setting things up. Then the bloggers who came on board wanted to be a "community" and have "ownership" and tell the people doing the editorial work what to do. Censorship came up, and control. Egos clashed. Tempers flew. It felt like the most wonderful thing I had ever done and possibly the most horrible. That was a rocky moment. The Sturm und Drang moment all creative enterprises undergo. Eventually the dust settled and everyone found their rhythm. 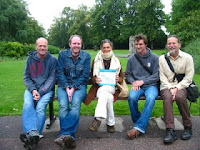 The blog got published through thick and thin. We didn't miss a beat. I kept going because everything, I saw everything was grist for the mill. There were great opportunities for getting over oneself on a daily basis and exploring new territories. Sometimes we liked each others posts and sometimes we didn't. We learned a new tolerance, I think. I did certainly. I realised this was an alchemical space, where things got aired and changed, and we learned how to work in diversity. How we allowed each other to speak after millennia of silence.

For a while, maybe a year, things went really well. We had a full quota of bloggers and invited guest contributors on board. We had a new readership and were cross-posted in several places. We met each quarter to decide the rota and took turns to lead weeks. Then the initiative around which our blog is based started to lose momentum. Some of the projects faded. Some people shifted camp to Norwich FarmShare. Some of us started to be two-timers on the Social Reporting Project. I started to feel I was carrying the load and filling up gaps.

So here we are in May 2012 at a moment of shift . . . The editorial crew is a beautiful structure but it only works when a certain number of people are writing stuff together for real. In a grassroots blog where people are in it for the feeling it gives them, or as promotion, the editor becomes simply a useful coordinator who can be depended on to hold the fort, carry the rap, pick up the ball etc. You end up being a kind of nanny, or secretary. You feel that you are putting yourself on the line, doing all the hard Transition work, while other people stay within their comfort zones, in their conventional lives.

So I think to run a good community blog I would get clear on who exactly is doing the change, who is loyal to the cause, and make sure the load is fairly shared. I'd rotate the editor role, right from the start. If you don't have an editor at all there is an emptiness to everything. A bit like a ship without a captain, or a kitchen without a cook. There's no one at the helm, no presence there. No fire. No food. No home station.

I'm not sure how it would work. Or if it would work. Maybe that's the place we are right now in Transition. The kitchen only works with a cook, and the cook is tired of being treated as a servant. She is wondering what she is doing amongst the pots and pans, and telling everyone: serve yourself. The cook is not just me, she is all the real-time Transitioners who feel this way, she is everyone on the planet serving the Empire, those who dine upstairs at our expense. She is the earth too and all creatures and plants who sail with her. Taking off her apron, kicking off her shoes.
Transition training; with fellow Transition comms people taking part in a Project Sharing Engine day, London, 2011; Transition bloggers in Chapelfield Gardens: Ann Owen's market garden, visiting the social reporters
Posted by Charlotte Du Cann at 09:03