A Swinger of Birches 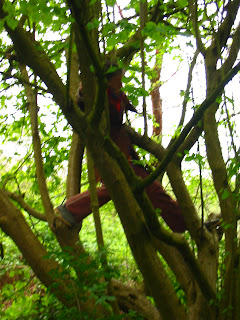 I don't know when the climbing thing began. Maybe it was in Port Meadow in 1998 when I found the apple tree down Aristotle Lane. One of those surprise trees that bear fruit with a taste you can never quite recapture. There were some way out of my reach. So I climbed up in the branches and helped myself. Once I got there, I didn't want to leave. I stayed aloft for a while and surveyed the scene. It was a whole new perspective. When I jumped down I felt full of vim. 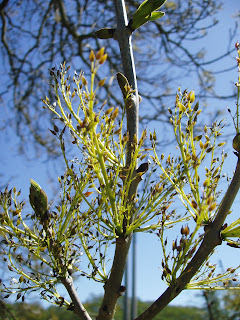 After that I came across an ash down by the Thames that gave me a great view over the river. Sometimes people passed by below me and were surprised by the sight of une femme d'un certain age up a tree. Mostly no one noticed. Then I found a yew in Holywell Churchyard and swung up into smooth red arms. Unmistakably female, austere and yet very friendly.

Friendly? Yes, well that's what I started to notice. That each tree had its own character and mood. It was something you noticed when you were up there. Different things occured to you depending on the type of tree you were in: some reflective, some to do with action. 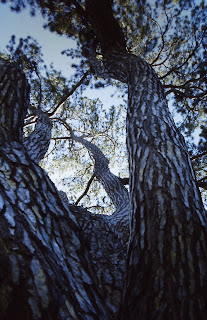 I wasn't alone. In 1998 there were a lot of activists who spent time in trees in the city. Down by the station a crew were trying to stop two horse chestnuts from being cut down and were keeping vigil in a tree house. Something jolted inside when I saw them. I have to make contact! Shortly afterwards joining a campaign to save the green corridor of the Oxford canal (with its great willows), I met people who had spent months up the oak trees at Newbury. Trees brought us together, irrespective of class, history, politics. They welcomed us to the neighbourhood, made us feel at home in a rocky time. 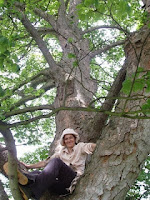 So after that I climbed a lot of trees: huge crab apples at Shotover Hill, goat willows down by the railway track, boxes in the University Parks. Unusually I didn't climb trees in America, or Mexico, when I went to those places during the millenium years. It was a thoroughly English obsession (though I did spend time in a thousand year old holm oak in the South of France). When I came to Suffolk there was no stopping me. Scot's pine, alder, sycamore, black poplar, holly, cherry, rowan and oak. I sailed in the canopies of trees as I walked through my new found land, across marsh and fen, on the way to the sea, back to the house. 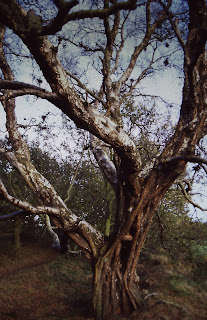 My favourite climb is a birch. I love her soft bark and easy low limbs. As soon as I swing up and find a perch, all thoughts of people and situations drop away and I am in earth time, at home, here and now. You feel warm and secure up there, in contact with the ancestors of the planet, communicating in a language you can't always write down. An encounter that is joyful and sober at once. 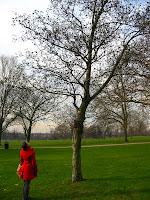 We're always labelling our posts Reconnection with Nature as if this were a big task, requiring years of training, or special abilities. It's not. It's a small step you make as you walk out the door. A move out of the squares and boxes we think in into the fluidity of the physical breathing world. A shift sideways from your left hemisphere to your right, downwards from your mind to your heart, into your body.

And sometimes upwards, into a tree.

Climbing in a hazel at Frostenden; ash flowers in Marsh Lane; black pine at Oxford Botanical Gardens; up a sycamore in Marsh Lane; birch at Thorpeness fen; checking into an Italian alder in Finsbury Park. Title take from the poem, Birches by Robert Frost.
Posted by Charlotte Du Cann at 07:54