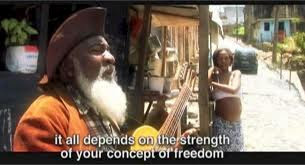 Welcome to our Transition documentary week on the blog! This week we are choosing one amongst the many documentaries that have shaped our thinking and ways of seeing the world. Films that have made us wake up, open our eyes, changed our point of reference. Our experience of life depends on our perception of the world, and media of all kinds influence this, overtly or subtly. A film can restrict or corral our worldview, or expand it and show us new territory.

Most films offer escape and glamour, and dwell in realms that have little to do with our ordinary lives. But some bring reality home. Make us look at things we would rather not look at, the places we don't normally see. The oil fields in the Ecuadorian rainforest in Joe Berlingers' Crude. Food factories, bullied farmers, tar sands, strip mining, melting glaciers. The consequences of our industrialised culture.

Transition often starts off in small grassroots cinemas, in halls and studios, with films that look at peak oil and climate change, ranging from the confrontative (Gasland, The Age of Stupid) to the upbeat (Power of Community). On Thursday Mike Grenville, who runs a Transition film programme in Forest Row, Sussex, will be sharing his tips about showing films, as well as his fave docs. Because this is not just about the documentaries, it's also about the set and setting in which you see them. Watching Life at the End of Empire would have really been no fun without the feeling I was surrounded by people who were ready to discuss its issues afterwards. Or watching the first Transition movie outside the celebratory context of the TN Birthday Party. They would have made little sense. 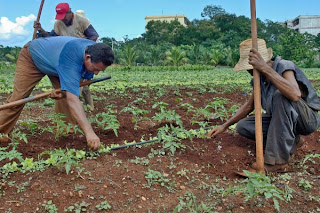 So the kind of films we will be looking are not entertainments: they are tools for discussion, sparks that light the fire.

Where do we go to find these films? In Norwich, there are regular documentary screenings at Cinema City, ranging this month from Patience (after Sebald), a photo essay on walking, memory and history, to a World Without Water (with panel discussion afterwards). There is also the monthly film night at the Quaker Meeting House every third Friday. Run as a "busy activist's alternative to a book club" alongside FoodCycle, the nights began in 2011 with Naomi Klein's The Shock Doctrine and will soon be showing, The Crisis of Civilisation, our Saturday story.

What About Me?
But the film I am choosing today swerves away from these attentions. I saw it at our Sustainable Bungay/Waveney Greenpeace film night last week in Tom Abbott's barn in the Saints. It's not about peak oil, or climate change, or digging potatoes. It does not examine the external factors that shape us – the industrial military complex, the domination of the consumer culture – and discuss ways we can mitigate them. It looks at the internal drivers, at our natures that strive for freedom, our bodies and imaginations that reflect the awesome forces of nature and the cosmos. What it means to be human here and now and connected.

Maybe it’s because I don’t travel anymore, or own a television, an I-pod or a radio, that the film, unscripted, shot on video, full of music and dance, made such a bright impression. Maybe it’s because I am surrounded by the tweedy countryside of England, its dun fields, and sober raincoats, all its quiet rhythms, that the colours of Africa and the sharp wit of city rappers and foxy old gurus startled me. I live on plain fare, and so the film appeared in the barn like a gorgeous feast. Oh, brave new world that has such people in it! 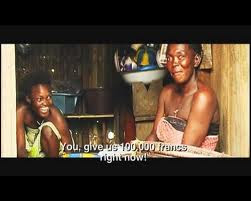 However it brought something else home. We live in a civilisation that runs along a vertical axis between mind and body – our world is masterminded by the Empire that fixes its attention on the control and possession of the earth’s physical assets. But this is not the whole story of life. This film was unequivocally framed along the horizontal axis, the dynamic between heart and spirit. The struggles for life (in spite of Empire and its false desires and self-absorbtion) are also a collective, multi-layered shout for freedom, for creative expression, for the mysterious and alchemical forces that run through us, the meaning of our being here together, billions of us at this point in time.

Shot on eight sequences in over 50 locations (which can be viewed seperately) by Jamie Catto and Duncan Bridgeman, the film looks at different aspects of human life from the trauma of childhood to the acquiescence of old age. It is a vibrant, noisy, sassy, colourful mix, interweaving American philosophers, Bedouin musicians, Chinese rappers, Gabonese Pygmies and Tuvan Throat singers, shot on rooftops, balconies, in streets and villages. It's a long way from the monoculture of the Mall.

In Transition we are as much subject to living in a trapping world of things, of sterile planning, funding, separation and control as anyone else in this culture. To bring the horizontal axis into all we do, to liberate music and creativity from its role as entertainment and escape, and instead see it as central to our lives, is the key to real change. The fact is as people, whatever land or nation we come from, we meet in the moving rhythms and harmonies of the heart. We are on earth together, creating a new narrative. In our minds we are alone and stuck in perpetual war and slavery.

Normally after the films we discuss how the subjects bear on our lives in Transition – The History of Oil, Inuit Wisdom and Climate Change – this time we laughed, got up and shimmied. 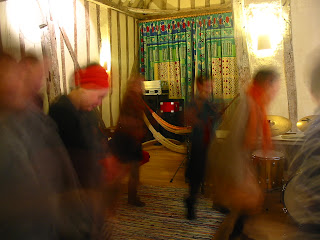